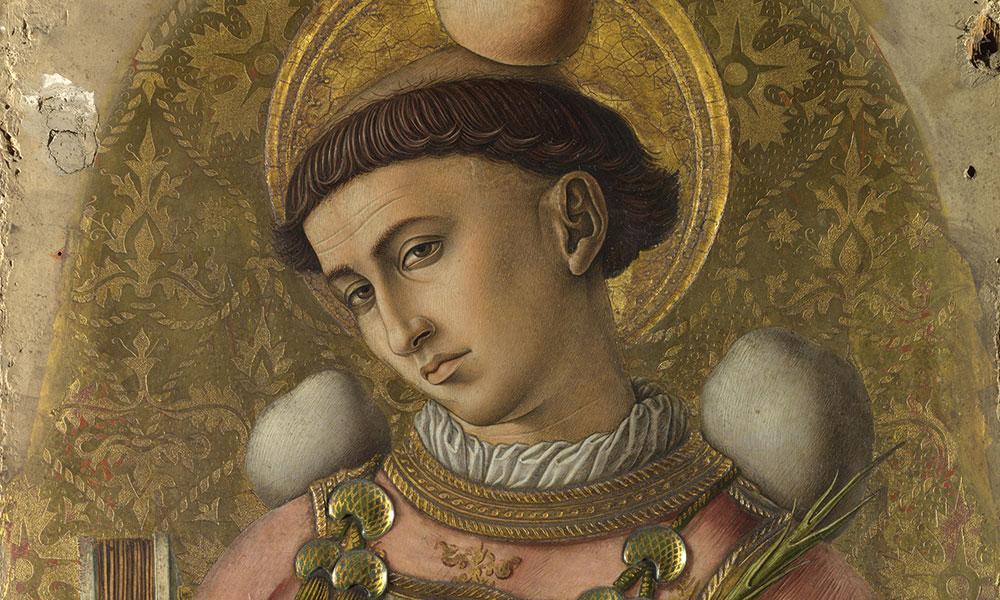 Who Was Stephen, the First Martyr?

Theology 101 is taking a peek behind the scenes of some of the prominent figures, groups and events referenced in the New Testament. The goal is to provide a deeper context for the drama of salvation that sacred Scripture communicates to us.

[Stephen concluded his answer to a question posed by the high priest by saying],“You received the law as transmitted by angels, but you did not observe it.” When they heard this, they were infuriated, and they ground their teeth at him … they cried out in a loud voice, covered their ears, and rushed upon him together. They threw him out of the city, and began to stone him … As they were stoning Stephen, he called out, “Lord Jesus, receive my spirit.” Then he fell to his knees and cried out in a loud voice, “Lord, do not hold this sin against them”; and when he said this, he fell asleep. (Acts 7:53-54; 57-60)

This passage describes the death of Stephen, the first Christian martyr. His journey to martyrdom began, perhaps innocently enough, with a complaint that the elderly widows of the Hellenist Christians were not receiving proper care from the Jewish Christian community in Jerusalem, which was dominated by the Hebrew-speaking majority.

It’s all Greek to me

In general, the term Hellenist was applied to anyone who was culturally Greek. As a rule, the Hellenists did not necessarily have a problem with the Roman Empire, and they tended to maintain their own synagogues in Jerusalem (though they still venerated the temple). Many moved to Jerusalem as they grew old out of a desire to die and be buried in the holy city. Undoubtedly, some of these became the widows in our story.

In response to the aforementioned complaint, the Apostles ordained seven deacons specifically to attend to the temporal relief of the poor in the Hellenist Jewish Christian community. Stephen is the first named of these deacons. He was known for his wisdom and holiness. He was also a forceful preacher. It was this quality that would eventually set him on the path to his death.

The beginning of the end

Members of several synagogues challenged Stephen to a debate. Stephen apparently defeated them so badly that they wanted revenge. Humiliated, they accused Stephen of blasphemy against Moses and God. The Jewish authorities, already wary of the preaching of the Apostles and the growth of Jewish converts to their message, had Stephen arrested and dragged before the Sanhedrin. The primary allegation against him seems to be a claim that he said Jesus of Nazareth would destroy the temple and challenge the traditions established by Moses.

Interestingly, Stephen’s defense seems to pit him against the temple and its sacrificial cult. This stands in sharp contrast to the majority of Jewish Christians at the time. While his reverence for the Law of Moses is clear, he suggests the temple cult is not a legitimate part of this law. For Stephen, Jesus was the one who restored the religion of Moses, whereas the temple was compared to the golden calf forged by Aaron in the desert. This argument was not well-received by the Sanhedrin. The rest is history, as indicated by the passage that began our reflection.

As the first Christian martyr, Stephen was declared a saint. He is the patron of altar servers, bricklayers, casket makers and, of course, deacons. He is often shown with stones, the Book of the Gospels, a small church and a palm frond. The palm branch symbolizes victory, triumph, peace and eternal life. Stephen’s feast day is December 26.

Stephen was the oldest of the seven men ordained as deacons by the Apostles. He also held the highest rank among these as he was given the title “archdeacon.”

In Acts, the account of Stephen’s martyrdom indicates that witnesses to the stoning of Stephen laid their cloaks at the feet of this prominent New Testament figure.

Doug Culp is the CAO and secretary for pastoral life for the Diocese of Lexington, Kentucky. He holds an MA in theology from Catholic Theological Union in Chicago.