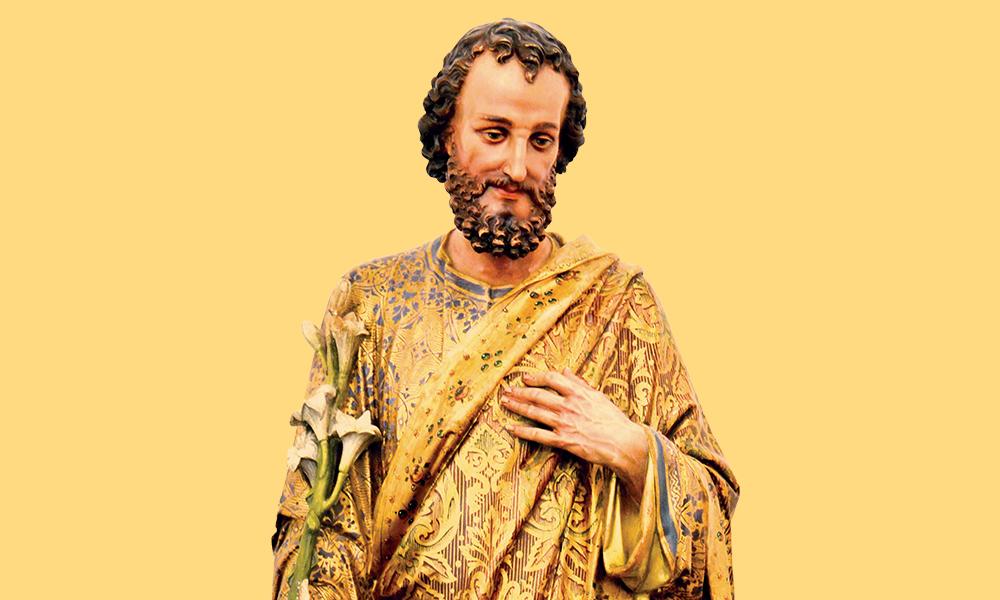 A Model for Men

As the spouse of the Blessed Mother and the adoptive father of Jesus, St. Joseph is considered the spiritual father of us all, and he is a particularly good role model for husbands and fathers.

In the book Consecration to St. Joseph, Marian Father Donald Calloway offered an interpretation of what St. Joseph might have been like. His description is based on inferences from what was written about St. Joseph, what the demands on him were and what it would have taken for a man to be able to fulfill the mission and vocation that was asked of Joseph.

Was Joseph young or old?

Christians have long thought of Joseph as being an older man, kind of a grandfatherly figure to Jesus and the guardian of a much younger Mary. However, that elderly image does not quite fit with the demands that were put on Joseph.

As Mother Angelica of Eternal Word Television Network fame put it: “Old men don’t walk to Egypt.” Nor do they walk from Nazareth to Bethlehem or Jerusalem, each approximately 80-mile trips, which the saint did repeatedly. Plus, old men can’t protect a young family on long journeys or for the many years these Jewish expatriates spent in the dangerous environment of Egypt.

It seems reasonable to surmise that Joseph was older than the very young Mary, but still a virile younger man who sacrificed a great deal in marrying her.

Joseph was closer to Jesus than any other person on the planet except Mary. Think about it — the apostles were with Jesus as a group for only three years, and we think of them as having a long and close friendship and discipleship with Jesus. Joseph had Jesus for perhaps 10 times longer, and more constantly, than the apostles. After all, they not only lived together, they worked together, so they were cooperative companions 24/7 until Joseph’s death.

Joseph saw Jesus through the formative years, as a child, teenager and young adult; and Jesus lived at home a long time, not leaving till he was 30. What an honor it was for Joseph to be in the presence of the Son of God for such a long, exclusive time, and how much they must have learned from each other.

One might surmise that Joseph was a strong, handsome young man to be able to earn the betrothal of the beautiful, faithful young Mary; and this engagement happened before anything was revealed to either of them about the coming of Jesus. Joseph was probably envisioning the normal life of a typical young Jewish couple having many children of their own.

Then the Annunciation occurred for Mary, and Joseph had the dream encounter with the angel who explained what was happening and what was expected of him. In the process, Joseph and Mary’s whole future was turned upside down.

This humble, working man was asked to be the father of a child with whom he had no biological connection, then to raise that child as his own to manhood, while not exactly having a traditional relationship with the child’s mother. And what did he do?

We don’t have his recorded words, but his actions were a resounding answer, “Yes.” That seems to display absolute trust in God and ultimate unselfishness.

The virtue of patience is ever present from what we know about St. Joseph. He knew he was in the presence of the divine, could not understand it, but did not demand to know. The Son of God wasn’t always easy to deal with, either, like when Jesus wandered off to preach in the Temple for three days when he was only 12 years old. Once again, Joseph did not demand answers.

As alluded to, Joseph patiently oversaw Jesus’ formation and development, which would suggest that the saint had a strong influence in teaching Jesus how to be a faithful man. Father Calloway goes so far as to say that Jesus’ human persona was probably a good reflection of the type of man Joseph was.

I am providing the tip of the iceberg regarding all of the attributes of this mighty protector of the Universal Church that Father Calloway teaches in his book, Consecration to St. Joseph. Let Joseph become a part of your life: a model, protector and guide. In today’s lingo, we might place him as being somewhere between a bodyguard and a personal assistant — only he carries the title “Terror of Demons” — making our journey to heaven much easier.

From my perspective, it is so nice for men to have a man, Joseph, with whom to identify in the Church. That is, the Church can seem to lean more toward being a feminine than masculine institution as we call it Holy Mother Church, and the Blessed Mother has considerable prominence. Data suggest that church attendance leans more toward women than men, and this is despite the clergy being male, as Jesus is male, and God the Father with male designation.

While God the Father is, indeed, our heavenly Father, Joseph is our earthly spiritual father and is also a male figure with whom we can identify — even more so than Jesus. Yes, Jesus was a man, but he was God, not just another human like Joseph and like us. Joseph was a husband, a father and a hard worker. We understand that. To be like Jesus is a lifelong journey, a goal toward which we strive and which sin continually stymies.

With St. Joseph, we have a goal that reflects humanity and manhood. We can aspire to be strong and hard working, unselfish in our relationships, patient with ourselves and others, kind, prudent, humble and pure, all the while keeping our focus on Jesus, as Joseph did for 30 years.

When I was reading Father Calloway’s book, the first thing I thought of upon waking each morning was St. Joseph. I couldn’t wait to get to the book first thing to maintain the closeness I was feeling with this great man.

Now that I have finished the book, I actually feel a little lost. How can I continue to travel with my new companion in life without a program, without a map, without Father Calloway pointing the way to St. Joseph?

The best I have come up with so far is to make up the following short prayer to Joseph reminding myself that I need him here throughout my day. Just call it Joseph’s Prayer:

to me the mission give.

Jesus, show me how to live.

Spirit, be my font of love.

you be at my side,

To walk with me,

Thomas Dorsel, Ph.D., professor emeritus of psychology at Francis Marion University, lives on Hilton Head Island with his wife, Sue. He is a parishioner of St. Francis by the Sea Church and a cantor at Holy Family Church. He can be found on dorsel.com.