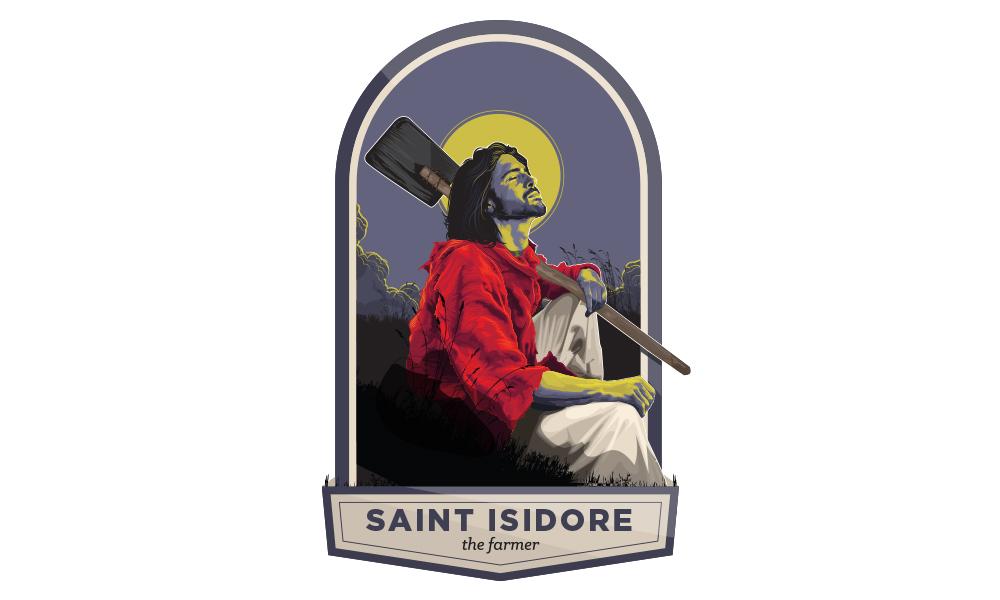 Feast – May 15  |  Patron of farmers, rural laborers and Madrid, Spain

The life of a generous, hardworking farm laborer who loved God and the land he tended is celebrated around the world as spring planting begins. Though he lived almost 900 years ago and never left his hometown, St. Isidore is called upon as farmers throughout the world pray for a successful growing season.

Born at the end of the 11th century near Madrid, Spain, Isidore began working as a young boy for the landowner he served his entire life. He and his wife Maria Toribia (beatified Maria de la Cabeza) had just one son who died in childhood. Isidore attended Mass every day and prayed throughout the day as he tended the crops. Isidore and Maria were especially generous to the poor and regularly prayed with those they fed, often sharing meals in their home.

More than 400 miracles have been attributed to St. Isidore.

Angels appeared to plow for him when he stayed at Mass too long. His employer once witnessed two angels plowing on either side of Isidore, enabling him to do three times the work of his companions. When their young son fell into a well, Isidore and Maria’s prayers were answered when the water suddenly rose to ground level and the baby could be retrieved. Miraculously, there was always enough food to share. Maria once warned that there was not enough stew for the extra people Isadore had brought home, but when Isidore asked her to check, there was plenty for all.

Though Isidore died in 1130, miracles attributed to his intercession continued. In the 17th century, for example, King Philip III of Spain recovered from a deadly disease after touching Isidore’s relics. Isidore was canonized in 1622 along with Sts. Ignatius of Loyola, Francis Xavier, Teresa of Ávila and Philip Neri.