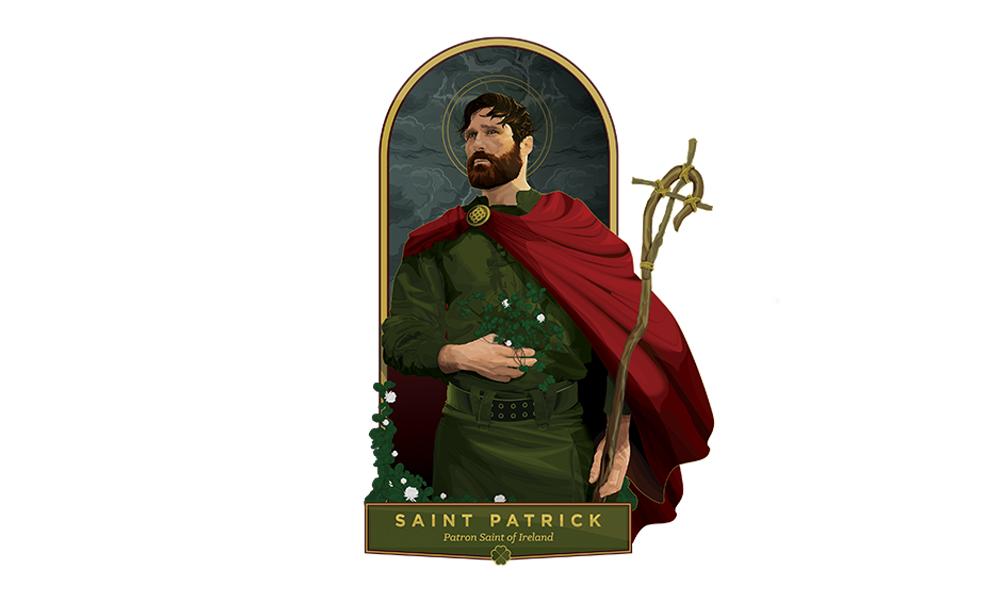 Saint Patrick, the beloved patron of Ireland, is renowned as the bishop who brought Christianity to Ireland, who used the three-leaflet shamrock to teach about the Trinity, and wrote the often-recited prayer that begins, Christ with me, Christ before me, Christ behind me. But did you know – he wasn’t even Irish?

Patrick was born in Britain, the son of a Roman official. According to his Confessio, Patrick was kidnapped by Irish pirates as a youth and spent six years enslaved, tending sheep in the Irish wilderness. During this time of isolation and deprivation, Patrick writes that he often prayed hundreds of times a day, asking for God’s protection and guidance. Eventually, he escaped and traveled 200 miles to board a ship sailing for Britain. After a difficult journey, he finally returned home.

Then in his early 20s, he had a dream after he returned home that inspired him to study for the priesthood and volunteer to return to Ireland after ordination. Recognizing the potential that Patrick’s knowledge of Ireland’s language and culture had, his bishop ordained Patrick the Bishop of Ireland when the first Irish bishop died.

Patrick visited parts of Ireland where no missionaries had traveled. Although he was often threatened and even imprisoned, he boldly preached to the most powerful Irish kings.

Despite this resistance, Patrick traversed the island for 40 years – humbly grateful to God the Father and joyfully inspired by the Holy Spirit – to preach about Jesus Christ, the Son of God.

Before his death around 460, Patrick’s compassionate enthusiasm had effectively converted thousands to Christianity. The priests and religious formed in the many monasteries and convents he established spread Christianity into northern Europe to inspire more missionaries, and Irish emigrants have spread love for him around the world.