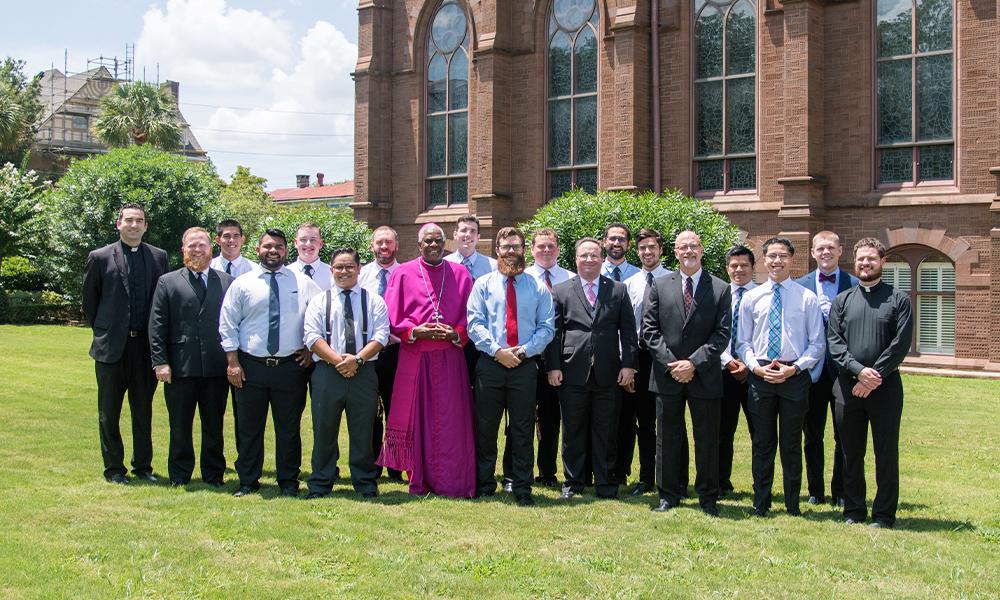 Know yourself, pray deeply, serve your community and stay close to the sacraments.

This is the advice priests give to men discerning God’s call.

Father Jay Scott Newman, pastor of St. Mary Church in Greenville, gets straight to the point.

The first question is the hardest to answer in many ways, he said, because it is so difficult to know what we truly desire, and we are pulled simultaneously in more than one direction.

Father Newman said that a man knowing what he wants requires that heart and mind first have to be focused on the truth of the Word of God and purified of disordered self-love.

“Only then does my authentic self emerge from the chaos of fallen human nature,” he said, “and so the first task of any man considering a path to the priesthood is to become a radically converted disciple of Jesus Christ by all the usual means: daily prayer, diligent study of holy Scripture, faithful recourse to the sacraments — especially Mass and confession — and service to those in need.”

He said once faith, hope and love are active virtues in a man’s life, then he approaches the interior freedom necessary to ask whether he wants to be a priest.

“It is precisely through the desires of our own converted hearts and the practical circumstances of our lives that the will of God will gradually be made known to us,” he added.

If a man decides that he does want to be a priest, then he must ask himself if he is willing to sacrifice all that must be sacrificed to become one. Father Newman recounted that this was the test faced by the rich young man who came to Jesus seeking the path to eternal life. The rich man was not willing to part with his possessions.

“For a potential seminarian,” Father Newman said, “the first sacrifices are obvious — no marriage or romantic friendships, no lucrative career, no liberty to choose where to live or work once the decision is made to offer oneself to the Church.”

However, the deeper sacrifices become clear later during the years of priestly formation. A man will be tested on his willingness to offer himself completely as a sacrifice to God.

Also during the years of formation, the Church verifies whether the candidate has all the gifts necessary to be a priest. The Church uses the time of seminary studies to determine if there are clear signs of a priestly vocation and no obvious impediments in a man.

“The only other recommendations I make,” Father Newman said, “are that he begin to pray the Liturgy of the Hours every day, and that he be ruthlessly honest with his confessor about everything in his heart. A man who follows that path is on the right road to think clearly about the possibility of the priesthood.”

SEE THE WORLD AS IT IS

Rev. Msgr. Martin T. Laughlin, former administrator for the diocese and now retired, agrees that men discerning the priesthood should delve deeply into a life of prayer that is guided by the Holy Spirit.

He also recommends that they get a college degree or learn a discipline so that they can support themselves.

“St. Paul was a tentmaker, and he supported himself,” Msgr. Laughlin said. “They ought to get a job and know what it is to make a living. [Then] if they still want to be a priest, that is good.”

“They must be conscious of the change in culture. We’re in a world that is changing rapidly,” he said, which includes figuring out how to connect “with kids who live their life on a cell phone. It’s a totally different existence today.”

He recommends a year of intense academic, theological and spiritual development as part of their discernment.

“The Holy Spirit is at work. I have no doubt about that,” he said.

Neither does Father David Whitman, pastor of St. Paul the Apostle Church in Spartanburg. He said that men discerning the priesthood must focus on prayer.

“Listen to the Holy Spirit and discern God’s will for you in your life,” Father Whitman said.

He would also tell these men “to receive the sacraments as frequently as you can and trust in Jesus. Then, I need to sit and talk with you,” he added.

After that meeting, Father Whitman would recommend a sit-down with Father Rhett Williams, pastor of St. Thomas More Church in Columbia and director of vocations for the diocese.

Stay close to the sacraments, especially reconciliation and the Eucharist, Father Williams said.

“When we don’t know what else to do, in order to clear the fog that the world creates, we simply strive to live the virtuous life,” Father Williams said. “Strive to name the areas of vice in your life that need tending and work to strengthen them … make them the subject of prayer and sacrifice.”

“When you do the first two … then serve in God’s vineyard. Your natural gifts, talents and interests will rise to the top,” Father Williams added. “That also allows people to help nudge you toward where you are meant to be by telling you what they see rising to the top in you.”

Next, consult with people, he said. Talk to a priest. Ask for a spiritual director. Visit discernment retreats or “Come and See” weekends. Reach out to religious orders that interest you. Don’t make this decision by yourself.

And, for those men who decide to follow God’s call, who chose the Church and whom the Church chooses, we say thank you.