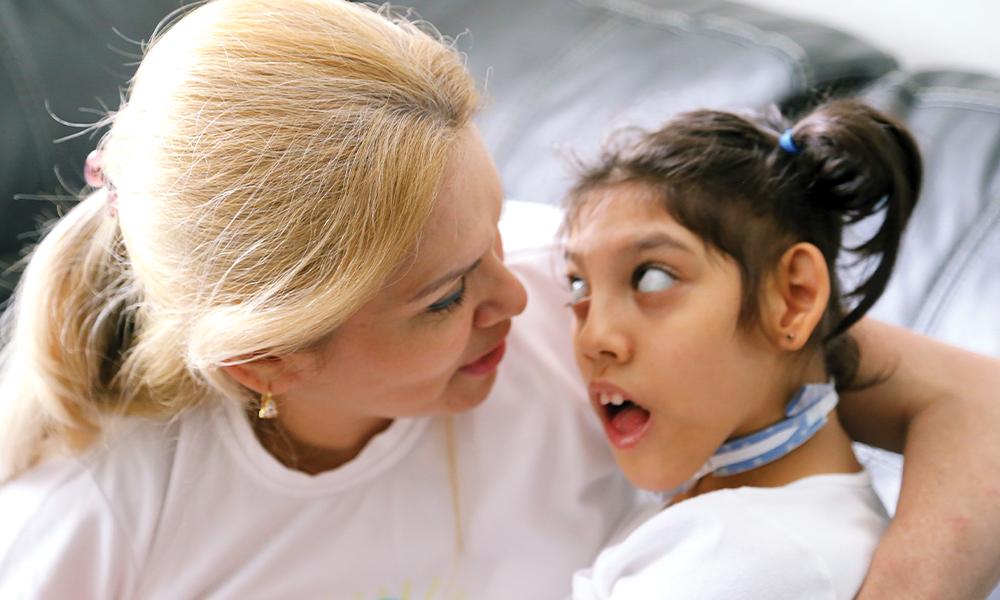 The True Miracle of Life

Iraida Villegas is a wife, a mother of three and a woman with an unwavering faith. And her daughter, Isabella, is a testimony to the miracle of life.

Isabella was born in Venezuela nine years ago, and although everything seemed to be going well with the pregnancy, medical negligence radically changed the course of her life.

“The birth was normal,” Iraida said. “She was a desired daughter, and I always entrusted her to Jesus.” Iraida said since her other two children were older, she longed for one more girl to always be with her.

A medical ‘Way of the Cross’

At 36 years of age and eight months into her pregnancy, Iraida began to feel pressure mixed with pain on the bottom of her abdomen, and that put her on alert.

She went to the hospital to report how she was feeling, and the doctor replied that she just had a large belly and that was why the baby girl was so heavy. But the reality was that Isabella was experiencing fetal distress and needed to be delivered immediately.

However, the doctors extended the delivery date and 15 days before the scheduled due date, Isabella began to press again to be born. The hospital insisted on waiting a few more hours.

These hours became a long wait that damaged Isabella's health.

“In the middle of my C-section I heard the doctors say: ‘There is nothing to do; she’s not responding; she’s not breathing,’” Villegas recalled.

Iraida says that she started crying and praying, “Jesus, you are the only one who gives life and I believe in you. Give the breath that my daughter needs.”

In the middle of her surgery, she could only see that the baby was very purple, but Iraida never stopped praying, and all the time she begged Jesus to help her lift Isabella up.

Isabella was born, but the difficult delivery left the baby intubated, in an incubator and in intensive care. She needed breathing assistance for two and a half months. Iraida was shocked to see her child in that condition, but she said that she did not feel fear. She simply approached Isabella, talking to the baby and telling her that she was her mother. She told the baby that she came to give her strength, that she was going to have life in abundance because Jesus was with her and there was no need to be afraid. Baby Isabella took her mother's hand and squeezed it tightly, responding to the sound of Iraida’s voice.

All in God's hands

During that time, the prognosis was bleak, with doctors telling Iraida to prepare for the worst. But a mother’s love transcends any limit and with her great positivity, strength and faith, Iraida was able to breastfeed Isabella, and worked with the baby when she was sometimes short of breath due to the habit of being connected to artificial respiration.

After overcoming this first stage of learning to breathe on her own and being at home, Isabella was again exposed to a case of oxygen loss. Her parents rushed her to the hospital emergency room, and the doctors’ first reaction was to intubate her again.

“I saw her in such a serious [condition] that day that I told the Lord Jesus: ‘My God, may your will be done and not mine. If you need her, take her away and I accept it. I don't want my daughter to suffer any more,’” she said.

The days were filled with anxiety and worry in which Isabella’s mother clung more and more to God, but then a new medical oversight completely compromised Isabella's development.

“That night, one of the doctors left my daughter alone. They did not let me stay, and Isabella, in the midst of her desperation at not being able to breathe, removed the tube. She suffered cerebral hypoxia, which means that she did not receive oxygen to her brain for a few seconds, her eyes rolled back and never returned to normal. My daughter suffered brain damage.”

From that moment on, Isabella continued to suffer from oxygen deprivation crises. She needed an operation for tracheal damage, and the only way she could continue to breathe was through a tracheostomy.

Isabella’s will to live and the love of her parents have brought the Venezuelan family through every emotion imaginable: moments of anguish and sadness, but also moments of happiness and hope. They can rely on more stable and controlled health care now that they are living in the United States.

“Isabella and I had to be away from my husband and children for two years while she received medical treatment in Colombia, since the crisis in Venezuela led her to suffer a high degree of malnutrition. But thank God we are now in this country that has blessed us so much and keeps us hopeful about the development of my daughter,” Iraida said.

Even with the help obtained in the U.S., one of Iraida’s greatest wishes is to find a job that allows her to work from home so that she can save to buy a house adapted for a person with special needs and care. Isabella is supported by local organizations to ensure her vitality and energy. She is a very strong girl with a charming smile that inspires everyone who has the opportunity to meet her.

“With much sacrifice we have achieved wonderful things, and I know that Isabella will walk. She will be better every day, and we will go to the beach to play, because I have faith in my God who can do everything,” Iraida concluded.

Laura Meneses Hernández is a journalist for the newspaper El Informador. Email her at laura@elinformadornewspaper.com.