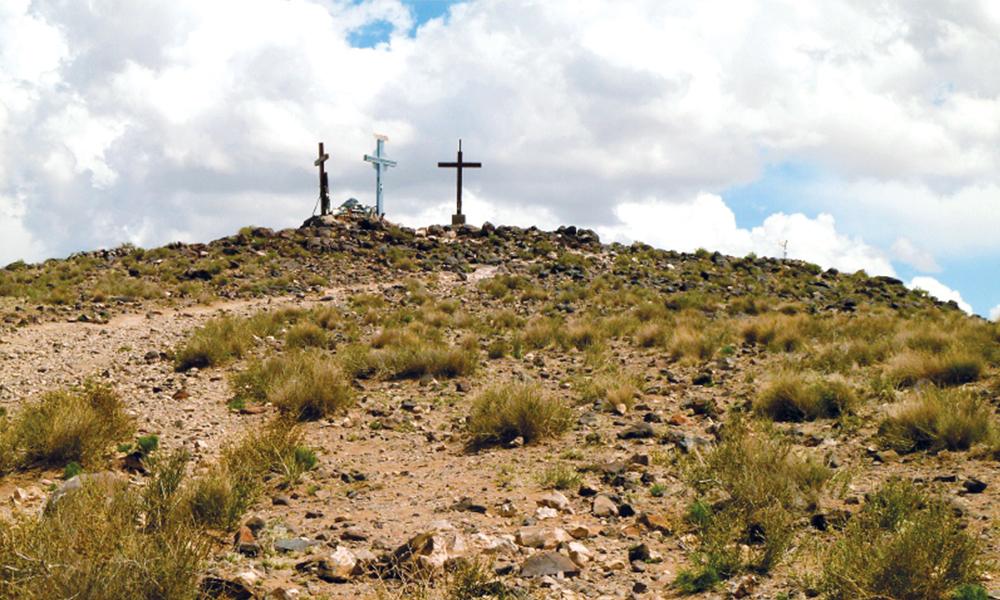 That Mountain at Tomé

About 27 miles south of Albuquerque on State Highway 47 lies the little New Mexican town of Tomé. Of particular interest there is El Cerro de Tomé (Tomé Hill) and the three crosses that stand prominently at its peak.

Their origins stem from Edwin Antonio Baca, who was born in the nearby town of Adelino on May 15, 1918, the oldest of seven children. His father joined the Penitentes of New Mexico, which date back to the 18th century when many men felt a religious void in their rural communities due to few Catholic priests being available to serve their religious needs. These men developed their own prayers, songs and rituals, not to replace the Catholic Church, but to supplement it.

Meeting in their moradas (chapels), the Penitentes worshiped throughout the year, but especially during Holy Week, culminating in Good Friday and Easter. The men also provided many important services to their communities, including arranging for funerals and caring for destitute widows and orphans, as instructed in the Bible.

Unfortunately, the Penitentes were most known for their unorthodox religious practices. On Good Friday members would engage in self-flagellation and symbolic crucifixions to express their sorrow and do penance for their sins.

Despite some unfavorable attitudes toward them, the Penitentes survived. Young Edwin admired their perseverance and dedication. “They were all good men and all good citizens,” Edwin insisted. Their main purpose was “to teach others morality and patriotism.”

After dropping out of school during the Great Depression in the 1930s, Edwin and three of his four brothers entered the military during WWII and were shipped out to fight overseas. Edwin saw action in North Africa and Italy and witnessed great loss and suffering. His 19-year-old brother, Ramon, was killed just 20 days after he arrived in Europe and 65 days before V-E (Victory in Europe) Day.

Grateful that he had survived the war but saddened by the loss of so many men of his generation, Edwin helped build a memorial to the 16 soldiers from Tomé and its neighboring communities who had died in World War II. The impressive structure, built in 1946, still stands near the entrance to the Immaculate Conception Church.

But Edwin hoped to do more to commemorate the fallen heroes. Remembering his father and the Penitentes’ crosses at Easter, he began to plan the construction of a more permanent cross to stand at the peak of Tomé Hill. Edwin declared that he was willing to bear all the costs and that he was willing to do the work singlehandedly, anticipating that it would take about three years if done alone. However, if a small army of 500 people assisted, he was sure it could be done in one day.

Work began on March 3, 1947. He recruited volunteers, but few came, and most were boys, who often had more energy than muscles for the hard work of hauling materials up the steep, half-mile climb to the top of the hill.

Seeing Edwin shouldering much of the work for days at a time, Lalo, Edwin’s younger brother and fellow veteran, pitched in whenever he could, slipping along and laughing with Edwin as they made countless trips up the hill hauling water, lumber, scrap metal, sand, cement and tools by hand and, sometimes, with the help of a mule. Others helped in other ways, but most people watched from a distance, admiring Edwin’s dedication.

By September 1947, Edwin had decided to alter his plans and build not one, but three crosses on the hill. The decision added much time, labor and material to the project, but added greater spiritual meaning as well.

Edwin completed his great project in early 1948, about a year after he began. Given the lack of attention by the local newspaper, the monument’s dedication on March 25, 1948, must have been a humble ceremony, without fanfare or the blessing of the Church hierarchy.

Still, three crosses now stood high over Tomé and the Rio Grande Valley, much as crosses have stood over other communities in New Mexico and throughout the world — Tierra Santa in Buenos Aires, the Hill of Crosses in Lithuania, and Mount Soledad in San Diego. Tomé and El Cerro de Tomé would never be the same again.

That brings us to Lent in the spring of 1974, when my wife and I, and our three young children, were living in Albuquerque, N.M. Having driven by El Cerro de Tomé several times, I decided it was time for father and oldest son, Danny — aged two and a half — to go down there and see what those crosses were all about. Indeed, maybe we could even climb up to the crosses on Tomé Hill.

So, off we went for the 27-mile ride south on Highway 47. When we got to Tomé, we found that we could drive right up to the base of the hill and observe the crosses that now looked a lot higher up than they did from the road. It was also a little surprising that nobody was around. Feeling somewhat isolated in a strange land, we debated (as much as one can with a 2½-year-old) as to whether we should make the climb. That decision was easy, since we had come all this way to do more than just look.

Once we began our ascent, it quickly became clear that Danny could not make the climb under his own power. So, looking up one more time and thinking about Jesus during Holy Week, I hoisted my solid little 35-pound “cross” on my shoulder and carried him up Tomé Hill. Of course, it was a joy to do so, sort of like Father Flanagan’s Boys Town motto, “He’s not heavy, he’s my brother.”

We made it to the top and relished the achievement, even though we knew nothing at the time of the origins of the monument. But perhaps we had accomplished exactly what Edwin Antonio Baca intended, veneration of the Cross in action, not just words. I also got to feel a little of the weight Jesus felt as he carried his Cross up Calvary. And, most importantly, father and son had done it together, establishing a bond from a pilgrimage that we still refer to 44 years later as “that mountain at Tomé.” 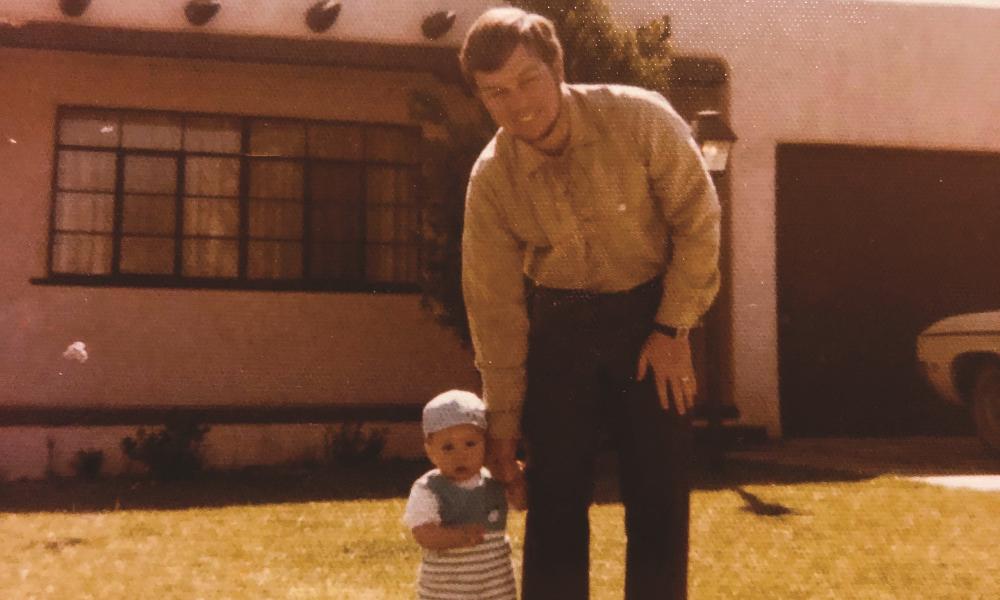 Thomas Dorsel, Ph.D., is professor emeritus of psychology and can be reached at www.dorsel.com.

The historical part of this column is largely a condensed version of an article written by Dr. Richard Melzer for the Valencia County News-Bulletin, April 1, 2015. Used with permission.