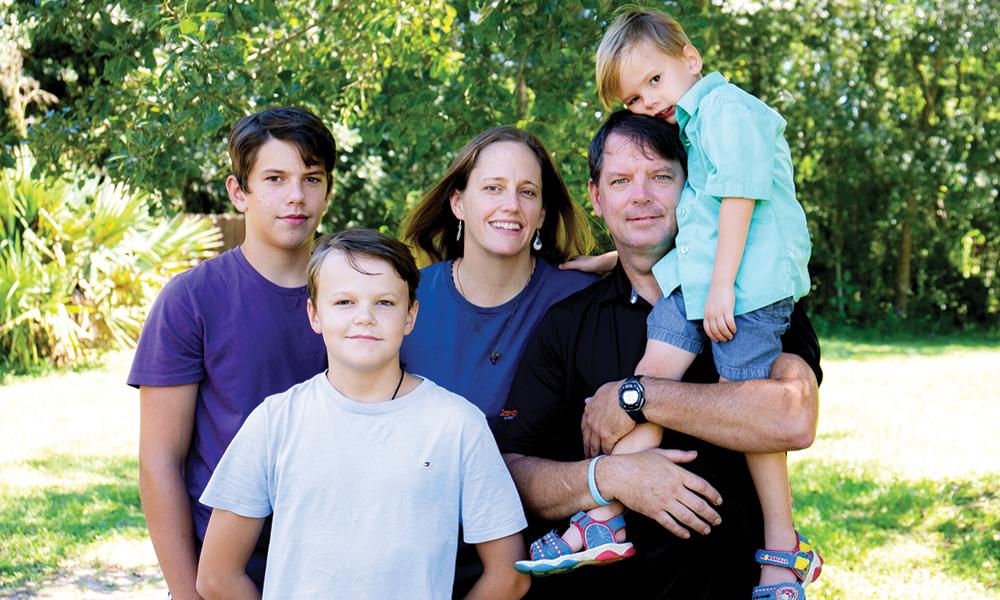 Chris and Angie Waldrop saw God’s love working in their community at St. Paul the Apostle Church in Spartanburg — so much that they felt called to take that love on the road as missionaries to distant lands.

The Waldrop family saw parishioners reaching out to people in need. They saw people flocking to the adoration chapel to pray.

“That sucker was full,” Angie said of the adoration chapel. “To see that alive, that was a gift to us.”

At St. Paul, they found a community centered on God, and they saw how much such communities are needed in other places.

So he prayed about it during an Emmaus retreat for men.

“Missionary work came across my mind, but I didn’t think my wife wanted to do it,” Chris said.

Well, Angie went on an Emmaus retreat for women, and she prayed about it, too. Missionary work also came across her mind.

So they talked with their three children — C.J. and Jonathan are in their early teens while Job is 4 —  and the youngsters were on board, too.

The Waldrops took an incredible leap of faith, contacted Family Missions Company based out of Louisiana, sold their home, sold their car, sold everything and began training to be missionaries.

Family Missions Company sent the Waldrops to Ecuador for three months, where they saw “missionaries in action,” Chris said. “They also wanted us to go to language school and take discipleship training,” he added.

When they were ready, the company flew the Waldrops to northern Peru, where they were stationed in Picota.

Angie said they “work closely with the priests.”

“We see what the community needs and what is put on our hearts,” Chris added.

One thing on their hearts was “bringing a tabernacle” and “opening it up to the people,” Angie said.

Religious women at Jesus Our Risen Savior Church in Spartanburg picked out a wonderful tabernacle for the Waldrops before they left the United States.

“You need to have this one,” Angie recalled them saying. “This is a beautiful tabernacle. You just open the doors, and Jesus is right there.”

He is indeed: right there, in the chapel, in the tabernacle, which is now in Picota for all the people who come to worship, which fortunately they have.

“The priests made sure a chapel was built in every pueblo,” Angie said.

With only two priests, the missionaries help keep chapels open for praise, worship and adoration. The Waldrops said it takes about six months to settle in and get acquainted with the people. Life in Picota is simpler than in South Carolina, Chris said, and in some ways that makes it harder.

For instance, some single, missionary girls, about 19 or 20 years old, came to Picota and were shocked because they had no running water, Angie said.

“Chris helped reroute the water to go into their tanks so they would have water just to get their bathroom running and get their spirits up,” Angie said. “They were homesick … they look at us as their parents,” she added.

Then there are the roads.

Chris said their post is in the country off the main road, a two-lane paved stretch that runs to Lima.

“Our pueblo is a stopping point, where people have businesses in their houses,” Chris said. “One woman makes a living by cooking for people. The restaurant is in her house.

“One boy makes rosaries for a living,” he added. Another little boy works at the market for his parents. “He’s 12,” Chris said.

Their pueblo welcomes travelers. They open their homes to visitors. But, once these visitors exit the paved two-lane, Chris said most of the other roads are mud.

It does take awhile to adjust to this simpler life.

C.J., Jonathan and Job, however, had no problem.

“Peru is like America 30 to 50 years ago,” Chris said. “For the kids, it’s the freedom they have here. In Peru, you can ride in the back of the truck,” Chris added.

“Me and C.J., we like the motorcycles and the dirt bikes,” Job said.

C.J. said the friendships have made a big impression on him.

“We would go to the local river and swim then go get ice cream,” he said. Home-churned ice cream. After that, they would go and play soccer.

“Missionary work is whatever God has for us and lets it spill out of us to others,” Angie said. “He provides every day. We’ve seen people healed right in front of us.”

Sometimes, however, life gets hard.

While in Peru, Angie suffered from parasites and Chris had kidney stones. Now they are back in Spartanburg for the funeral of Chris’ mother.

The couple, however, said God is in control, and they will go where he leads them.

They still feel called to missionary life, and and their next mission is to Costa Rica. They leave Aug. 15.

Wherever they go, they know that the community at St. Paul is praying for them.

“The love that they have for each other and for the Lord is just incredible,” said Joe Duffessy, a parishioner at St. Paul who used to sit next to the Waldrops at Mass. “When you give your life to God, the blessings that you get are astronomical.”

Sometimes those blessings come with home-churned ice cream in a country not your own.