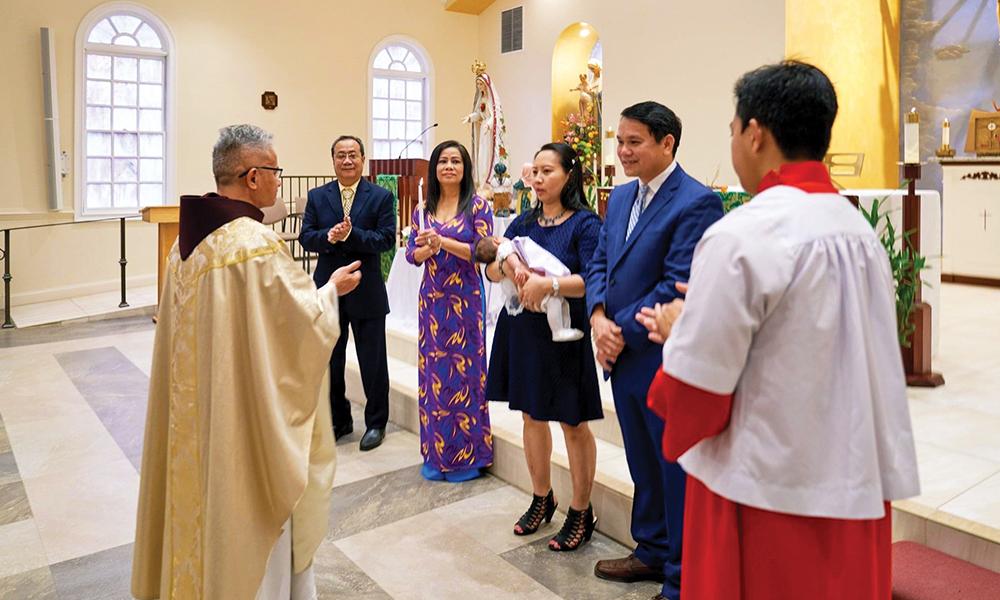 A Model for Welcoming the Immigrant and Blending Cultures

One cannot truly reflect on the Holy Family at Christmas without thinking of the families at our border, praying and hoping for a better life. There are so many, and, like Mary and Joseph, they are homeless without shelter. In the midst of this uncertainty and chaos, there are success stories of how immigrant communities came to America, how they were welcomed and supported and how they are no longer strangers to this land.

Franciscan Father David Phan, vicar for Vietnamese Catholics for the Diocese of Charleston, shared thoughts on what helped resettle people in the United States after the Vietnam War.

“We were referred to as ‘boat people,’ people who escaped from Vietnam,” he said, recalling his journey here.

He said it was somewhat well-planned, once he arrived. The process consisted of an assessment, which determined where a person would most likely be successful based on his or her occupation. Fishermen were more likely to be assigned to New Orleans or a coastal city. Someone well-educated could be relocated to Washington, D.C., for example.

Father David said relocation based on occupations eliminated the possibility of one state carrying a burden and created fair distribution of labor and people. The goal was to help to assimilate, overcome the language barrier and to allow the Vietnamese to continue their traditions and grow together in community. In fact, over the past several decades, Catholic Charities has resettled thousands of Vietnamese refugees and has assisted our new neighbors in achieving economic self-sufficiency.

Just as when they arrived after the war, today at the border we see many unaccompanied youths. But this is a problem that has a solution.

“The U.S. Conference of Catholic Bishops has a program to help unaccompanied kids,” Father David said. “I know because I was one of them. Many churches responded to families and helped Vietnamese immigrants to assimilate to our country.”

To assimilate meant that those who came here were able to share the best of two cultures and to be fully faithful members of the Church. So, Christmas became a mixture of Vietnamese and western traditions: families attend Christmas Mass, with Midnight Mass being the most popular; they share meals and gifts; and elders tell stories to instill in the young a proud, rich and diverse heritage.

Father David said there is a Vietnamese tradition of taking off your shoes before going into another person’s house.

“When you remove your shoes before entering someone’s home, the message you are sending is one of a spiritual nature in that we keep the house clean, and the house is a spiritual place for the family,” he explained. “It is the language of peace and harmony in the family and the hope that we always bring in new opportunities” for the future.

Consider attending a Christmas event or Mass in Vietnamese at St. Thomas the Apostle in North Charleston, St. Martin de Porres in Columbia, Our Lady of La Vang in Greer, St. Andrew in Myrtle Beach or St. Anne in Rock Hill.

Kathleen Merritt is the director of the diocesan Office of Ethnic Ministries. Email her at kmerritt@charlestondiocese.org.