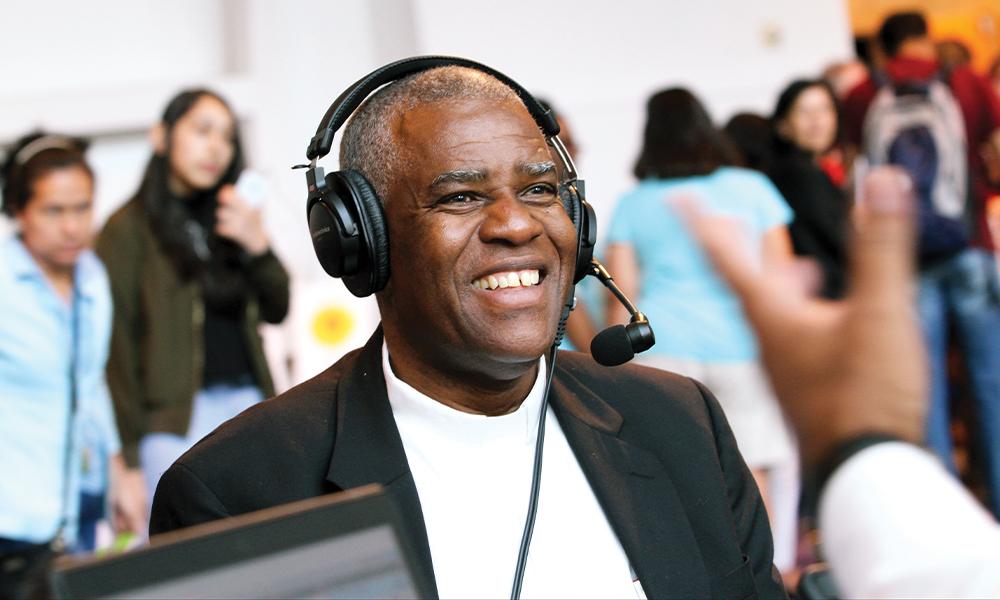 Under the Leadership of ‘Padre Jacques,’ Hispanic Mission Built Strong Community Ties and a Church

A community of immigrants came together over simple tacos not only to build a needed new church but also to tighten the community bonds.

Believers at San Felipe de Jesús Mission in Forest Park, Ga., sold the Mexican staple and other dishes from Central America in rain or shine, summer’s heat and winter’s cold, to raise the dollars to replace a parish building bursting at the seams with people.

As the longtime mission administrator, Bishop Jacques Fabre-Jeune, CS, stressed that the church is more than a place to go on Sundays.

“It makes community. People come, their children are there. They feel they're at home. That's the secret and that's why they responded,” said Bishop Fabre, who went by “Padre Jacques.”

In the end, the community of San Felipe constructed the new building, raising $1 million from their own efforts.

Growing to standing room only

The mission started in the early 1990s in a two-bedroom apartment in the now desirable Atlanta neighborhood of Grant Park. Without a church of its own, families worshiped for a time outdoors under blue tarps. In 2002, the community moved south about 10 miles to Forest Park, on the flight path of Hartsfield-Jackson Atlanta International Airport.

In about a decade, the property with a modest Baptist church had become a booming Catholic hub. With Bishop Fabre’s spiritual leadership, it has grown to some 7,000 Hispanic families, from less than 2,000. Many would be undocumented.

As the parish grew, local law enforcement took notice. There was a time when police set up traffic checkpoints to look for unlicensed drivers and unregistered cars on Sunday mornings close to the church. Parishioners felt intimidated and too afraid to attend. As people complained, Bishop Fabre intervened.

“Many times, I had to go help people because they will be arrested, and their car will be abandoned,” he said.

Through dialogue with city leaders and the appointment of a new police chief, the checkpoint policy was revised.

At a recent celebration for the beloved priest, complete with plates heavy with Mexican food and a Mariachi band, Forest Park Mayor Angelyne Butler congratulated him on his appointment as bishop and credited him for the positive impact he’s had on the community.

“I am a bit sad but very happy for you at this moment,” she said.

How could they afford a new church?

Bringing new people brought a happy problem: too many people in the building. Those hoping to find a seat had to show up 30 minutes early for Mass.

The church is in a working-class city, with a median household income of $35,000, about half the amount of the rest of the Atlanta area. Roughly one in five residents lives at the poverty level or below.

Looking around the parish, Bishop Fabre called on the community to pull together to raise money for a building fund. As a result, more people joined the ministry teams selling food after each of the four Sunday Masses.

The sale of tacos, pupusas stuffed with cheese and meat and other ethnic dishes brought in an estimated $8,000 a week, along with fiestas and other cultural celebrations.

With a growing bank account, Bishop Fabre dreamed of designing a familiar church for the community, one recognizable to the mainly Mexican families. The congregation helped design the sanctuary in a California-mission style with a bell tower and curved doorways.

The 11,200-square-foot sanctuary holds 600 people, which now feels too tight on special occasions. The original Baptist church serves as the parish hall.

Jose L. Ramirez, 43, has worshiped at the mission for a dozen years. He is now a parish council leader. In Ramirez's view, the bishop's strength is how he identifies a vision and then enlists everyone to accomplish it. He wants us to use our God-given talents to better the community, Ramirez said.

“Ninety-nine percent, everybody helps him. He is a person with a big heart. He helps God,” he said.

Lazaro Cruz, 38, a longtime worshiper, agreed. San Felipe is where he was married, and his children were baptized. When he bought a house, “Padre Jacques” came to bless it.

Bishop Fabre always encourages people to serve the church and others to the best of their ability, Cruz said.

“He’s not going to be quiet,” he added. “He’s going to be looking for the needs. Once he finds them, if they want to grow, be ready to grow and learn, to grow in faith.”

Andrew Nelson is a staff writer for The Georgia Bulletin, the newspaper of the Archdiocese of Atlanta. Email him at nelsonandrewc@gmail.com.