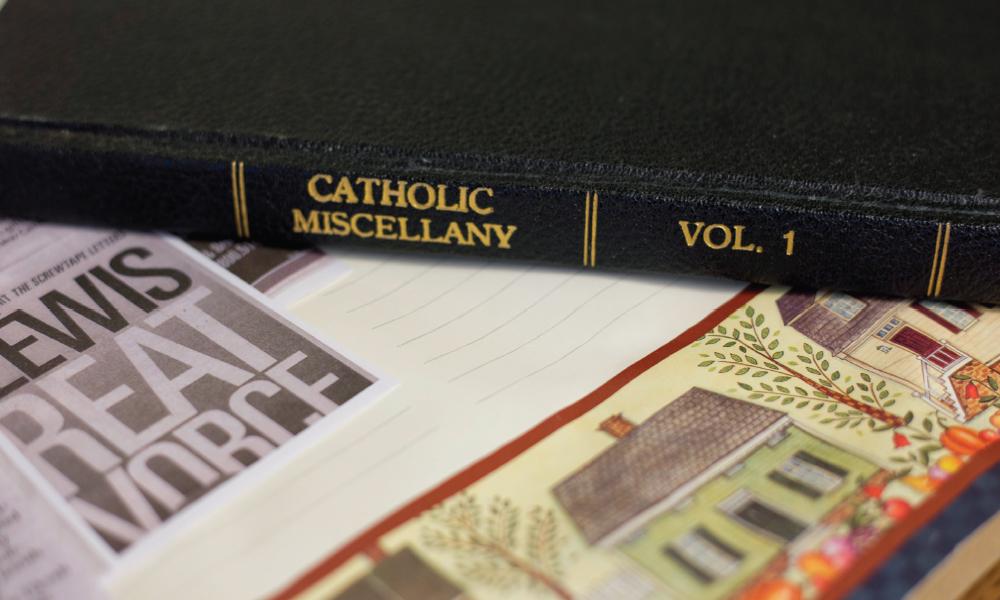 The story of The Catholic Miscellany is very much an American tale, one that embraces freedom of religion and the freedom of speech.

As soon as he set foot on American soil in 1821, Bishop John England embraced his role as shepherd and defender of American virtues. As he traveled his new diocese covering Georgia and North and South Carolina, the young bishop took note of the needs of his scattered flock and formed a strategy to address injustices against his people.

The populous was hostile to Catholics, particularly his fellow Irishmen who were newly immigrating, so he used the most powerful tools available to him, pen and paper, and his genius.

He began distributing his writings on June 5, 1822, by purchasing advertising space in Charleston newspapers to answer nativist attacks that sought to restrict the political rights of foreign-born citizens.

Bishop England’s goal was to provide weekly written instruction of Catholic doctrine through essays and to correct falsehoods circulated by anti-Catholic entities. He was eventually able to produce his own pamphlets, calling it the United States Catholic Miscellany — miscellany meaning a collection of writings on various subjects. This, the first Catholic newspaper in the country, quickly became a successful mouthpiece for the Church.

Brian Fahey, director of the diocesan Office of Archives and Records Management, said the original iteration published on the diocese’s own printing press covered topics across the country. It included information about marriages and deaths of Catholic lay people from as far as the Archdiocese of New Orleans, plus advertising for school enrollment.

Bishop England excelled at apologetics and was diplomatic in his discourse, Fahey said. Though the average person may not have read what he wrote, Fahey said the bishop’s contemporaries would have consumed it thoroughly.

“Bishop England was way ahead of his time; he was radical for his time. He believed in the representation of the people. To actually engage somebody outside of the Church and debate with them was radical,” Fahey said.

The original circulation was in the hundreds and cost only $4, which few ever paid. Fahey said a good deal of editorial space was devoted to encouraging people to pay their subscription fees.

In addition to format, the name of the paper has changed over the years, reflecting current events and the focus of the episcopacy at the time. Those names include U.S. Catholic Miscellany, which for some became politically charged and was changed to the Charleston Catholic Miscellany, arguably reflecting South Carolina’s secession from the Union or the establishment of a separate diocese for Georgia.

With ebbs and flows of publication, The Miscellany may have been the first Catholic newspaper in the U.S. but it was not a continual one. A fire on the Charleston peninsula destroyed the Cathedral of St. John and St. Finbar on Dec. 11, 1861, along with the editorial offices of the paper. The press was stopped. Bishop Lynch tried to revive it after the Civil War but there weren’t enough funds to support it.

In 1951, Bishop John J. Russell approved the dissemination of diocesan news through The Catholic Banner, a two-page section of the nationally distributed Our Sunday Visitor out of Huntington, Ind. The Banner continued operating under Bishops Paul J. Hallinan, Francis F. Reh and Ernest L. Unterkoefler.

Then, in 1960, The Banner joined with three other dioceses, designed and published in Georgia, with local articles and photographs accompanying national and international copy from the Catholic News Service out of the U.S. Conference of Catholic Bishops. Two years later, Bishop Reh moved The Banner’s editorial offices to Columbia.

When Bishop David B. Thompson was ordained, the former English teacher returned the diocesan newspaper to its historic roots and renamed it The New Catholic Miscellany. Production moved from Columbia to the see city in 1995, and the staff began producing the paper in-house and printing it locally.

The New Catholic Miscellany won its first national award for excellence that year as Bishop Thompson received the great honor of outstanding performance from the Catholic Press Association, representing hundreds of newspapers and magazines.

In 2002, the word “new” was dropped from the nameplate and the paper became The Catholic Miscellany. It underwent a significant design change, but the staff of journalists have maintained their focus on providing Catholics with local news and in-depth articles on the faith.

Over the years, The Catholic Miscellany has garnered countless awards from the Catholic Press Association and gained the respect of its journalistic peers and devotion of its readership.

Deirdre Mays was the editor of The Catholic Miscellany newspaper for 18 years, and her career spans decades as a photojournalist and writer.