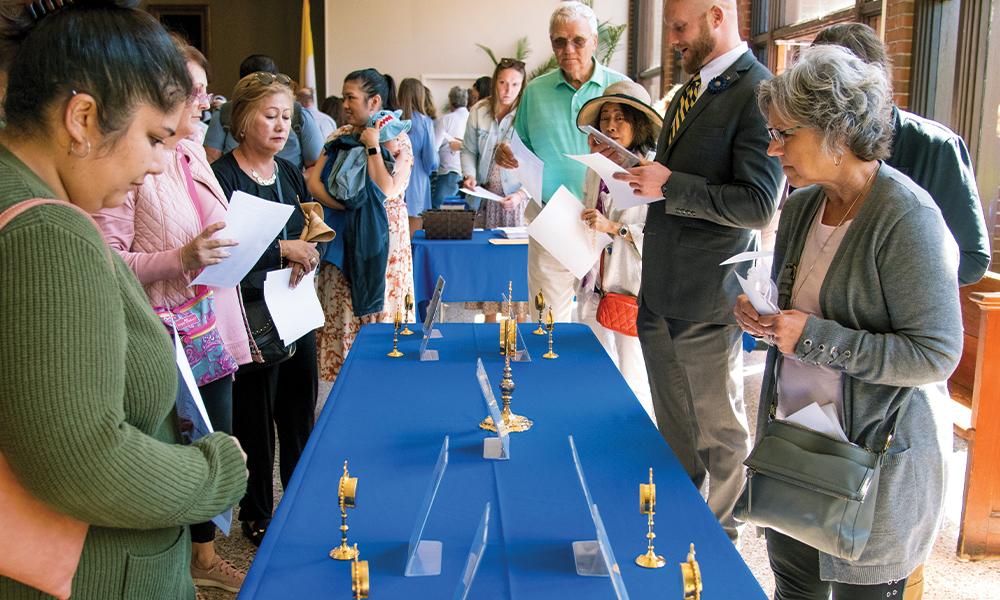 The Exposition of Sacred Relics

“One saint will reach out to you,” Father Carlos Martins explained at an exposition of sacred relics held at the Cathedral of St. John the Baptist in Charleston earlier this spring.

Father Carlos, a member of the religious community Companions of the Cross, has been blessed with a unique ministry. He travels the world with over 150 relics and displays them at various churches, schools and prisons. What visitors expect to see is a museum exhibit; instead, the priest witnesses transformations to spiritual conversion and holiness. He said that will never get old. In fact, he urges visitors to fill out a questionnaire letting him know about their experience and the mysteriously powerful recharge of their faith.

Each exposition begins with a presentation on relics that provides the catechetical and spiritual basis for the veneration that follows. The teaching presents the basic Gospel message: God wants to be encountered. He touches us through the lives and the sacred remains of his saints.

Since 2005, Father Carlos has hosted over 200 expositions in various countries. He has traveled around some of the northern and southern parts of the U.S., France and Italy so far this year. The expositions are usually standing-room-only, and the one in Charleston with 350 people in attendance was no different. Catholics want to experience that recharge.

Participants have often said an overwhelming feeling comes over them as they enter the exposition — and rightly so, since two immensely popular relics are fragments of wood from the True Cross and a piece of the veil that belonged to the Blessed Mother.

Other highlights include relics of Sts. Joseph, John Paul II, John the Baptist, all 12 Apostles plus Sts. Maria Goretti, Therese of Lisieux, Francis of Assisi, Anthony of Padua, Thomas Aquinas and Teresa of Calcutta.

What is a relic?

Father Carlos took time to explain that relics are physical objects that have direct association with the saints or with the Lord:

First-class relics are the body, or fragments of the body, of a saint, like a bone or flesh.

Second-class relics are something saint owned, such as a shirt or book, or fragments of those.

Third-class relics are items that a saint touched or that have been touched to a first- or second-class relic of a saint, like touching a piece of cloth to a saint’s body.

All but six of the relics on display were first-class relics.

“That means that if you brought something to touch the relics, what you have will become a third-class relic,” Father Carlos said.

Many people brought rosaries or other special items to touch to the relics; some touched relics with their clothes.

Father Carlos suggested that people pray while in line for the relics of the True Cross and the veil of the Blessed Mother. He said there will be a saint that “speaks” to a person as they walk around, stopping to pray at different stations. It was sometimes easy to see which ones “spoke” to them, he said.

The priest talked about the extraordinary experiences he has witnessed throughout the years.

“There was a man who was born without the use of his legs and had spent 55 years in a wheelchair,” he said. “He got up and walked home from the exposition.”

And there was the 9-year-old with cancer.

“She was told cancer would kill her. She placed her hands on the relics. She didn’t notice that her tumor had shrunk when she was on her way home from the Exposition of Sacred Relics that day. At her next scan, the tumor was gone,” he added.

Father Carlos told participants that if they give their hearts to God, they could experience the same thing. He said he knew first-hand about that because he converted from atheism. He warned that God will only enter the heart when invited and that there were four common roadblocks: the refusal of Sunday Mass, the refusal to confess sins, refusal to extend forgiveness and lying.

He asked everyone in the Cathedral that day to do four things: pray for Pope Francis and his intentions that day; go to confession in the next three weeks; go to Mass and receive communion sometime in the next 20 days; and decide that day not to attach to sin.

Father Carlos ended his presentation by talking about a couple of the saints whose relics the attendees would “meet.” One story was of the amazing St. Bernadette Soubirous, whose body never decomposed. He also told the heartbreaking story of St. Maria Goretti, who was only 11 years old when she refused the advances of a man, who then stabbed her. St. Maria’s amazing ability to forgive her murderer led to her sainthood.

Father Carlos said that St. Maria’s mother was the only parent of a saint ever to attend the canonization ceremony of their child. And, incredibly, the murderer attended the ceremony also; he went on to enter the Franciscan brotherhood after serving 27 years in prison and repenting of his crime.

Father Carlos said that some of the relics may feel hot, or those in attendance may hear or smell something when picking them up. He told everyone to be attentive and that what they were experiencing was the saint reaching out to them.

For this writer, it was St. Therese of Lisieux, otherwise known as the “Little Flower.” She was born with the same last name as mine, much to my parent’s surprise. I now have a third-class relic of hers, and her “little ways” will touch my heart forever.

View Father Carlos Martin’s presentation at Corpus Christi Church in Lexington at https://bit.ly/relicscorpuschristi, or visit the diocesan shrine, Our Lady of South Carolina in Kingstree, home to a collection of over 200 relics: olscshrine@gmail.com or 843-355-3527.