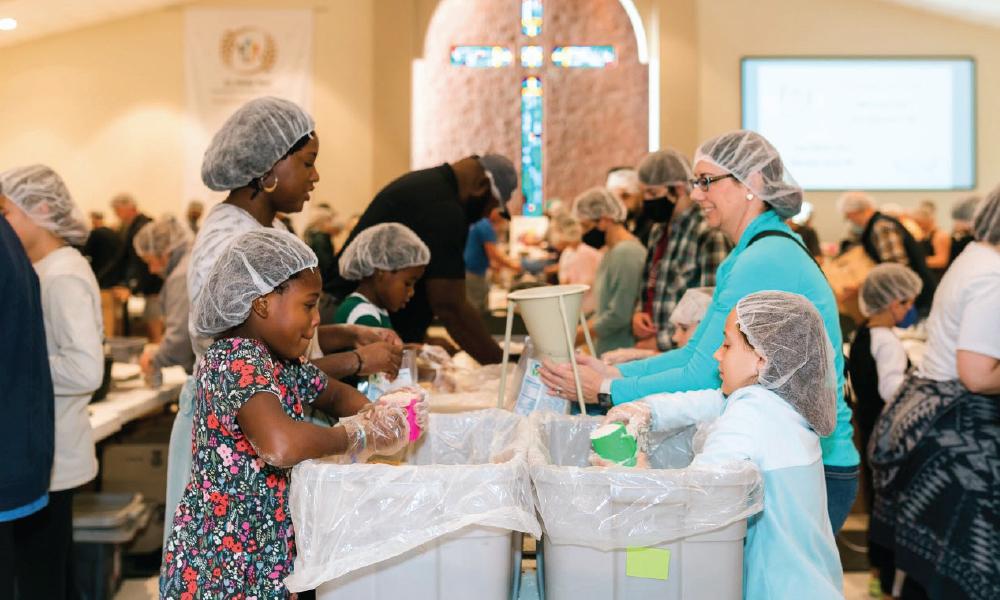 As parishes around South Carolina begin a new year, many may ponder how they can further serve their communities. How can they engage the entire congregation this year? What is something that everyone can do and will be willing to do?

One church in Fort Mill, St. Philip Neri, has found an answer. Not only did their entire parish come together for one cause, but they had a waiting list of people, some not even part of their church, willing to serve the community and communities of people far beyond.

The church’s first World Hunger Drive Meal Packing event took place in October 2022. Jen Fredenberg, their director of communications, remembers having a conversation with Oratorian Father Fabio Refosco, the pastor, many months before. Both discussed the need to broaden the service possibilities among parishioners, and while people loved serving locally, Father Fabio expressed a desire to support more missions abroad too.

Fredenberg also remembered how successful meal-packing events were as a former parishioner of St. Matthew Church in Charlotte, North Carolina. She said the parish there has been serving others through meal-packing for over 20 years.

“It made logical sense to bring that kind of enthusiasm here,” she said, but it isn’t as easy to plan as it sounds.

There were many logistical issues that came into play, like getting the food and materials to pack, finding a community who needed those meals and then shipping the food to them. This is where relationships came into play.

Fredenberg had connections with St. Matthew, so she went to work asking questions on how to plan and carry out the service. However, by a twist of fate or perhaps providence, St. Philip Neri’s business manager, Lynda Curry, moved to the area from Indiana, where she was a business manager at St. Malachy Church in Brownsburg. That church had been supporting Ste. Marguerite Church in Haiti since the late 1990s.

Curry suggested St. Philip Neri partner with St. Malachy on the Haiti mission, so the idea for a meal packing event was formed. For it to be successful, the partnerships and volunteers were vital. As stewards, the parish at St. Philip Neri has three commitments to discipleship: giving, praying and serving. With Fredenberg’s experience and guidance from St. Malachy Church, St. Philip Neri was able to make this first ever event hard to beat, and the Hunger Drive fulfilled their serving commitment.

She said they started by taking one weekend to alert the parish about the upcoming event at all Masses.

“By that following Wednesday, we had 600 volunteers signed up,” she reported. “We are a parish that loves to serve.”

“We could accommodate anyone. We had children as young as five years old and people in wheelchairs,” she said. “We had so many volunteers that we had a waiting list. So many groups came together, like the Knights of Columbus and even the Boy Scouts. It was pretty inspiring.”

Fredenberg shared that there were three two-hour shifts, each with 200 volunteers and a goal of packing 50,000 meals per shift. With so many volunteers, 28 people supporting key jobs and 20 assembly lines each shift, the community packed a total of 158,760 meals.

Each box of packed meals will feed six people. The packages cost $40 and contain rice, soy, dehydrated vegetables and vitamin powder, which will need to be cooked. An organization called Servants With a Heart helped offset the cost with a $14,000 sponsorship for 350 boxes. Individuals were invited to be “Box Angels” and sponsor boxes, too.

“Each donation got a Box Angel with a message of love that was attached,” Fredenber said. “Some people wrote ‘I love you’ in Creole and even our preschool children sent messages.”

Servants With a Heart is based in Charlotte and equips other organizations with materials to host meal-packing events. According to their website, they pay 17 cents per meal and require a 50,000 meal minimum. They assist with raising money and even provide a space to hold the event in nearby Waxhaw, North Carolina.

The food was delivered to the people of Haiti through Ste. Marguerite Church in Port Margot. The Congregation of the Sisters, Servants of the Immaculate Heart of Mary are partners in this project. They live in the area and provide administrative work and development needs for several clinics.

Fredenberg said the feedback they have received from the parishioners since the hunger drive has been tremendous, and they are planning their second annual event for October 2023. She said other parishes in South Carolina have reached out to them on how they can get started doing a meal packing event.

“It’s definitely a great way to bring the whole parish together for a great cause,” she added. “Serving the hungry is something that can be done year round and is needed everywhere.”

For more information on Servants With a Heart, visit servantswithaheart.org. Contact Jen Fredenberg at communications@stphilipneri.org.