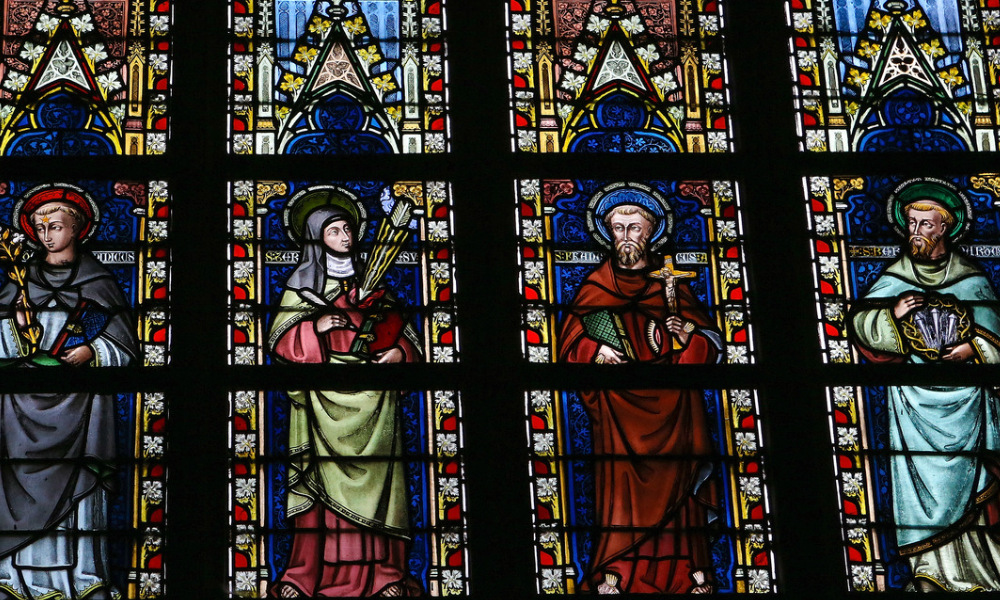 The Saints Are the Family of Jesus

In Matthew, Jesus uses familial terms to describe the relationship between himself and his disciples: “For whoever does the will of my father in heaven is my brother, my sister and mother” (Mt 12:50). It is not so much as a teaching master and disciples but with the familiarity of close friendship. He will furthermore state in John 12:2, “In my Father’s house there are many rooms … I go to prepare a place for you.”

In the salutations of his letters to various churches, St. Paul frequently addresses them as saints. For example, in his Second Letter to the Corinthians he writes, “To the Church of God which is at Corinth with all the saints that are in the whole of Achaia”. Why does he call them saints? It is presumed that they are living according to the will of God the Father as Jesus indicated.

Historically, the earliest recognized saints were the martyrs, followed by the austere desert hermits, monks and nuns, missionaries and those dedicated to the poor and suffering.

Eventually, “saint” became a technical term, a title officially bestowed by the Church upon someone who, upon investigation, has manifested a reputation for heroic virtue and for intercessory power. At first, three miraculous healings were required to assure divine approval. With modern advancement in the medical field, that has been reduced to one healing which explains the numerous beatifications and canonizations in our time.

There are several steps to full recognition. When a cause is officially opened, the person receives the title Servant of God. With the proof of heroic virtue beyond ordinary Christian life, the title of Venerable is given. With verification of the first miracle through the intercession of that Venerable, the title of Blessed is given, and liturgical veneration is now extended to where the person lived or ministered. The verification of the second miracle raises the Blessed to sainthood with universal veneration. The Church’s Congregation for the Causes of the Saints supervises these procedures, but it is the pope who makes the declarations.

Pope emeritus Benedict XVI pointed out to the postulators of the causes that “if they are properly presented with their spiritual dynamism and their historical reality, the saints help make the word of the Gospel and the mission of the Church more credible and attractive. Contact with them paves the way to true spiritual resurrection, to true lasting conversions and to the blossoming of new saints.”

Sad to say, due to a false interpretation of Vatican II, the veneration of saints was seriously degraded for over 10 years, called the Decadent Decade. Statues of the saints were removed from churches and frequently their molds smashed. Their relics were sold and became ornaments. In the seminary I attended, the traditional statue of Our Lady was removed from the sanctuary and a modern one was placed in the vestibule of the chapel. She seemed not part of nor welcome among the worshiping community. But, during the 26-year pontificate of St. John Paul II, there was a strong restoration of devotion to saints.

A contemporary monk received a prophetic instruction from Jesus about the veneration of saints as recorded in the book, In Sinu Jesu: “I wanted, and want still, that you should find in them (the saints) a true friendship that is all pure, a friendship that does not disappoint. Through the saints and their ceaseless intercession for you before My Face, you will at length come to me in glory. Do not cease invoking the saints and teach others to seek from them the help they need in their trials on earth. In heaven the saints will be glad for having helped you make your way to Me in glory.”

There is now a revival of interest in relics as indicated in the successful tour of 150 relics by Father Carlos Martins, who brings fascinating stories about the special graces, including healings, he has witnessed. And, relics have a scriptural source. In the Acts of the Apostles 19:11, we read of healings in Ephesus using St. Paul’s garments.

The Catechism of the Catholic Church covers the subject of the Communion of Saints quite extensively. It quotes St. Paul VI’s The Credo of the People of God: “We believe in the communion of all the faithful of Christ, those who are pilgrims on earth, the dead who are being purified (purgatory), and the blessed in heaven, all forming the Church.”

The saints are always attentive to our prayers (CCC #962).

+ The diocesan Shrine of Our Lady of South Carolina – Our Lady of Joyful Hope in Kingstree has over 200 relics representing the saints “who have pleased you throughout the ages.”

Father Stanley Smolenski, spma, STL, MTh, a canonical Baptistine hermit, is the co-founder and director of the Shrine of Our Lady of South Carolina – Our Lady of Joyful Hope in Kingstree.