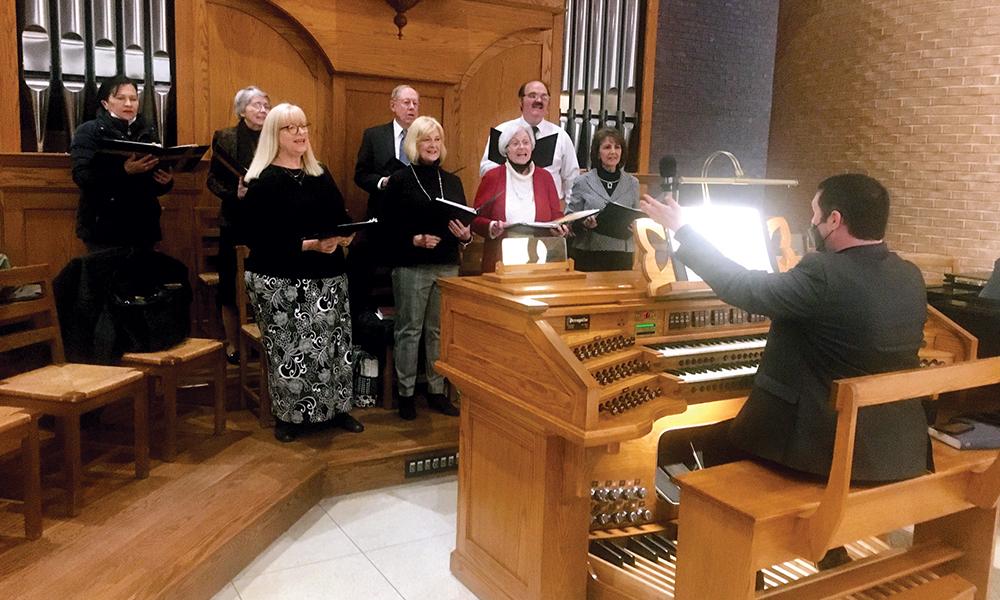 Resurrection Choir and the Ministry of Presence

The Compassionate Café and grief support groups are great for the long term because anyone who wants to feel that camaraderie can attend for as long as they want — months or years.

But what about the support for those grieving in the short term, with an immediate need? What about the respect given to the deceased? Or families who just lost a loved one and need to feel that immediate embrace from others?

For them, St. John the Beloved offers the Resurrection Choir.

Rodney Ward, director of music ministry at the parish, explained that for every funeral he gets eight to 10 volunteers from his choir to sing. Although the choir has been offered for funerals at St. John since before Ward started in 2018, he said that families report being “blown away” by the music at the funeral for their loved one.

“We’ll rehearse beforehand,” he said. “Families are never expecting it. They are always so thankful for the offering of music … It’s like we are wrapping our arms around the family.”

A member of the Resurrection Choir, Mary Jo Martin, said they represent “a prayerful presence and support for grieving families. We are inspired and blessed to be a part of this sacred rite.”

St. Michael Church in Garden City has a ministry where members of the parish volunteer to attend funerals.

Father Edward Fitzgerald, pastor, said that there are about 125 to 130 funerals on average at the church or at local funeral homes per year for members of the parish.

The ministry to attend funerals was the priest’s idea.

“About seven years ago, I began to offer a Mass on the fourth Monday of the month in the evening for the souls of purgatory,” he said. “I decided to preach at one of the daily Masses soon after I started about the importance of praying for the dead and supporting the grieving at funerals as we have so many here. St. Vincent DePaul Society began attending funerals about five years ago after I presented them with the idea as well.”

Between the volunteers at St. Michael and the St. Vincent DePaul Society, about six to eight parishioners go on a regular basis to the funerals.

The reason? To offer their support and condolences.

Tim and Nancy Czarny are among the parishioners that try to attend every funeral. They get a text from Darlene Lucido, a volunteer who sends out details on upcoming funerals to the group.

Lucido said the text goes out to a group of about 20 people, and sometimes they will have four or five a week.

“This ministry just hit me,” Tim Czarny said. “It spoke to me as something respectful to do for the ones that have passed on. I have been attending funerals for seven years on a regular basis.”

He said he likes that he can help pray them into heaven. His wife Nancy, who also goes to some of the funerals, added that attending funerals is an act of mercy. She said that her husband, who is a fixture at funerals, said he always feels better after he goes.

“He keeps a prayer card for every one he goes to,” she said. “We now have a collection of about 400 prayer cards from all the funerals he has been to over the past seven years.”

“It’s saying to the family that you may not know me, but I am keeping you all in my thoughts and prayers,” Lucido said. “That really goes a long way during a difficult time.”

“I am praying for them to go to heaven and someday someone will be praying the same thing for me,” he said.