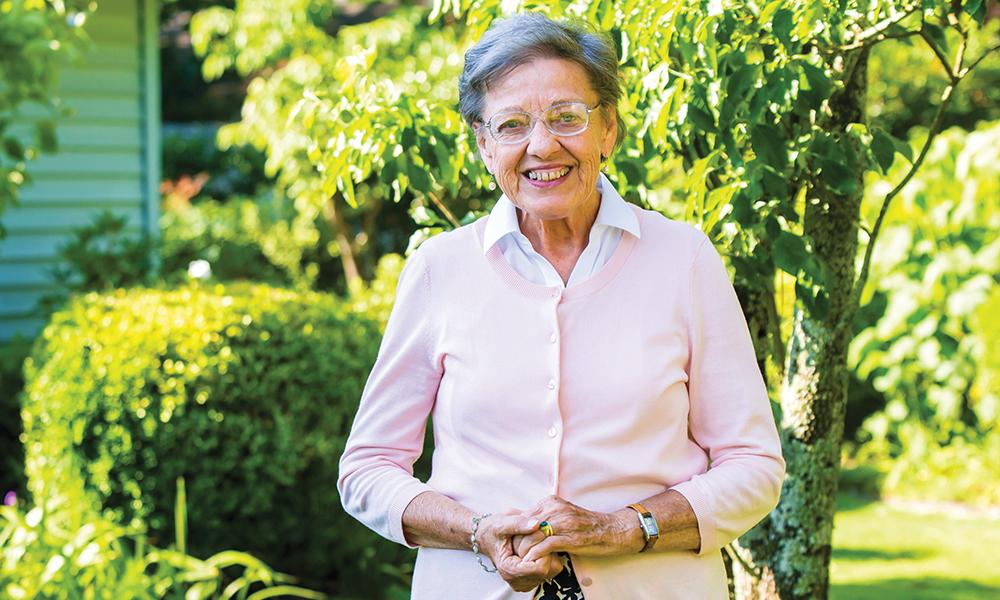 The Legion of Mary is celebrating its 100th anniversary this month. We’re featuring one of her members, Ivy Monahon, who helped bring the organization to South Carolina. Her life is a living testament to the blessings that come in surrendering to the will of God.

1945. In the northern Yugoslavian region of Slovenia, a truck packed with 18 Catholics who refuse conscription in the Communist Party is making its way to the Austrian border. Inside are those who could be killed for their resistance, and a baby girl cradled in her mother’s arms. Her father drives the precious cargo of family, neighbors, friends and two Catholic priests seeking safety across the Austrian border with the British Army there. The woods are full of Communist partisans coming out daily to force men to join. The Catholic passengers had heeded their priests’ warnings to refuse and now face arrest or worse. The truck is stopped. While the partisans are distracted, the driver accelerates suddenly and races for Austria under a hail of bullets.

Thus began the first chapter in the life of Ivy Tominec Monahon. Her parents’ successful escape was followed by 11 years in an Austrian refugee camp where she learned German and received elementary education. Then follows a transatlantic passage of unforgettable seasickness and resettlement in Cleveland, Ohio, through an international relief organization. In America, she acquires English fluency and a secondary education.

1961. President John F. Kennedy challenges Americans to “ask what you can do for your country.” Some respond by working in impoverished regions of the U.S. or abroad with the Peace Corps. Ivy wants to help also and sees the needs in her own neighborhood, especially spiritual needs. A priest invites her to a group he’d recently formed called the Legion of Mary, and it captivates her from the beginning.

Ten years of legionary work in Cleveland follows, during which Ivy learns of Peregrinatio pro Christo (PPC), or traveling for Christ. The PPCs are a kind of immersive course in the lay apostolate in other cities, states or countries. Ivy was advised first to visit Ireland while Frank Duff, the elderly founder of the legion, was still alive.

1974. In the summer, Ivy flies off to Dublin and meets the humble Mr. Duff. The Irishman greets her for the first time, stretching out both his hands to wrap them around hers.

“So, this is the young lady from the land of the free and the home of the brave,” she remembers him saying. Ivy was honored by his kindness and humor.

Ivy is exposed to “such worldwide love, zeal, humility, joy, humor,” she said, while learning at the legion’s international headquarters. She meets with members evangelizing other countries and recollects that it was an intense, grace-filled period.

Ivy inquires about taking up legion work in Cincinnati and receives a letter from Duff saying the legion had “broader horizons.” He asks her to consider the evangelization of Iceland. Ivy hesitates because the trip means finding a way to support herself there. After a little research, she answers, “Yes!”

1976. The Iceland assignment is deferred for a year, so Ivy brushes up on her German and finds work as a nanny for a German family. She also spends time traveling to the American South, Mexico and Jamaica.

1979. Ivy now works for the Miami Regia, or regional council, which is responsible for many states in the Southeast, including South Carolina. She spends three years traveling to meet with groups across the South and helping members promote local legions.

She said the first active group in our state was at St. Martin de Porres Church in Columbia.

1981-2000. Ivy lives in Miami and works for the regia, first as president and followed by other positions throughout the years. She acts as the direct link between the governing body and local legions in South Carolina. Ivy earns her college degree in social work in 1990.

2001. She moves to Columbia, S.C., to establish the governing council for the 10 area praesidia and joins the legion at St. Martin de Porres.

2004. Ivy marries Joe Monahon, also a legionnaire, who accompanies her on six or seven PPCs. Ivy helps start many of the new praesidia in the state due to her experience and enthusiasm.

2018. There are 25 praesidia across South Carolina.

“My goal is to always teach other legionaries the skills of evangelization and zeal for the legion,” she said. “If it is a blessing to them, then they should share it with others.”

Now a vibrant septuagenarian, Ivy lives in Aiken with Joe, with whom she prays legion prayers and the rosary daily. Reflecting on her faith journey from Slovenia to South Carolina, she said it all took a decisive turn once introduced to the Legion of Mary, which motivates and sustains her.

“It’s a calling. I just kept saying, ‘Yes,’ and one thing led to another. You recognize where God wants you using the talents you have. You get your marching orders and you obey,” she said.

“I’ve been blessed over and over with so many graces — more than I ever could have imagined. Trust Mary to be your guide. Every person you are sent to see and to minister to has a priceless, infinite value.”

Kathleen Belinga is a parishioner of Our Lady of the Hills in Columbia and a member of the Our Lady of Mount Carmel Praesidium of the Legion of Mary.

The Legion of Mary is a lay-led Catholic service association whose members volunteer to perform corporal and spiritual works of mercy in almost every country in the world. It celebrates its 100th anniversary this month.

What is the legion?

The Legion of Mary is the largest lay apostolate organization in the universal Catholic Church. Its several million members serve on a voluntary basis and are married and single laymen and laywomen at least 18 years of age. This ministry is a balanced program of prayer and service in union with the Holy Spirit as he operates through Mary, Mother of the Church. It provides Catholics an opportunity to do something positive for the Church while deepening their spiritual life and strengthening their faith.

What fruit has it borne in the last 100 years?

At least 1,000 Chinese legionaries were martyred for refusing to abandon their faith and membership in the legion. Another approximately 2,000 people were imprisoned and sentenced to forced labor for 20-30 years and died in prison or were executed under Mao Zedong. Columban Father Aidan McGrath, who evangelized in China from 1949-1951, shared their stories of persistence and faith. He set up 1,000 Legion of Mary praesidia throughout China in 90 dioceses before his imprisonment and permanent expulsion.

Where can I join a group in South Carolina?

Our Lady Star of the Sea, North Myrtle Beach (Ark of the Covenant)

Corpus Christi, Lexington (Our Lady Mother of the Church)

All Saints, Lake Wylie (Our Lady of America)

St. Edward, North Augusta (Our Lady of Epiphany and Our Lady of the Presentation)

For more information on the S.C. Legion of Mary, contact Joe Jannetta at jrjannetta78@yahoo.com.