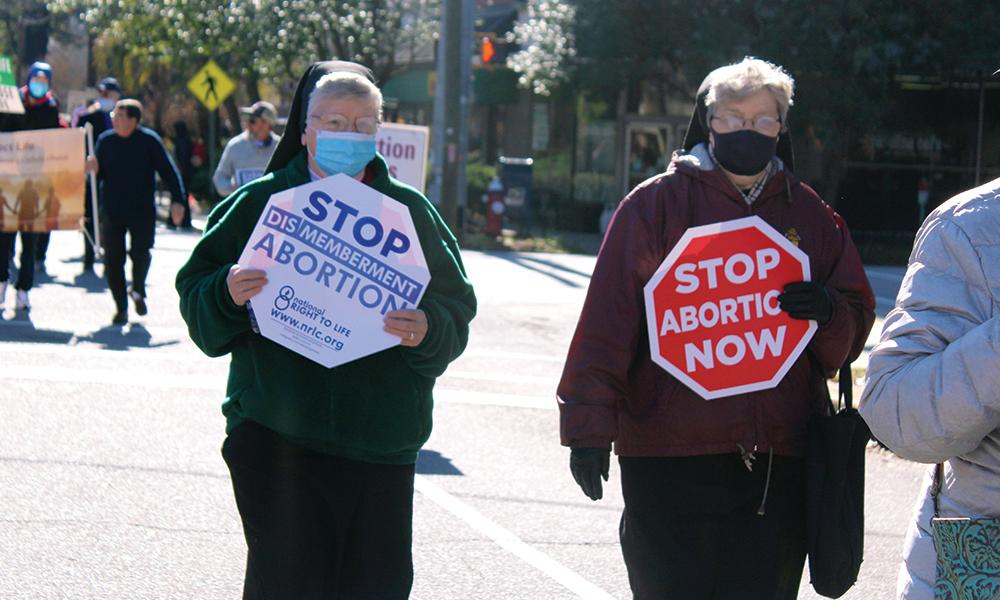 I was appalled one summer when a college friend mentioned to me, quite casually, that she had accompanied another girl, recently graduated, to have an abortion. This was shortly before the Supreme Court rendered its decision in Roe v. Wade. Several years later I encountered a high school senior, one who had transferred into our school in the middle of her junior year, who was exhibiting fatigue and distress during the religion and English classes I was then teaching. It looked like more than a full-blown case of senioritis.

When I took her aside to ask what was going on, she told me of her nightmares about babies. It turned out that, without her parents’ knowledge, she had managed to have an abortion a few months before they decided to transfer her into our school and make her ditch the boyfriend they found distasteful. They didn’t know half of it. A lot of very confidential listening and gentle care at our school, including the ministry of a good confessor, helped get her through. Years later I learned that she had done well in college, married happily, had children, and stayed close to the Church.

I mention these episodes because they have so strongly reinforced my adamant commitment to the pro-life cause. A few years back, Father Ray Leonard preached a homily in which he spoke of an article he’d read and an experience he’d had. It seems that a government official in Iceland had bragged to reporters about how the country had eliminated Trisomy 21, the root cause of Down Syndrome, by prenatal testing and the availability of abortion. Father Ray was deeply saddened by the article, which coincided with an encounter on his day off.

It seems that service at a restaurant was exceedingly slow and customers were becoming more and more agitated. Then a young woman decided to circulate among them. Soon people were talking to her and laughing with delight as she calmed them. This young woman had Down Syndrome and had developed remarkable skills at lightening the hearts of those around her. Father Ray wondered aloud how many such persons had been lost to Iceland — and to us in America — because of our disdain for genetic-linked conditions and our fear of apparent “inconvenience.”

I’ve told the story before, but Father Ray’s eloquent and moving homily brought me back to a moment when I had chanced upon an article in a medical journal while taking a Life Issues course at St. Charles Seminary in Philadelphia. I was researching a paper on the eugenics movement, which claimed to be about the business of “improving” the human gene pool. The authors seriously proposed several options for dealing with Type 1 diabetics. The options included sterilizing youth with that diagnosis or depriving them of insulin so that they didn’t burden the healthcare system and survive to reproduce.

At this writing, I am in my 53rd year as a Type 1 diabetic. You can imagine why I needed to take several deep breaths, leave the library and have a very long meditative walk after I read that article. It was a prime example of the dangerous mentality escalating as we were seeing certain lives deemed not worth living.

Attitudes that trivialize human life and dignity abound these days, so I am glad that our diocese has many pro-life groups, operates the St. Clare’s Home for pregnant women and sponsors Rachel’s Vineyard retreats for those suffering after an abortion experience.

There’s another aspect of the pro-life movement that needs attention — and it is always helpful to have a saint as back-up.

Many are aware of the strident condemnations which St. John Paul II made regarding abortion, euthanasia and the willful killing of innocents. These condemnations are highlighted in his encyclical Evangelium Vitae: The Gospel of Life. He makes a solemn declaration that abortion, euthanasia and the voluntary killing of innocents are always gravely immoral, and he does so in communion with the bishops of the world. What is often missed, though, is that he calls attention to other sins against life also.

He cites murder, suicide, neglect of children and the poor, inadequate care of the sick and dying, maltreatment of prisoners, war, the arms trade and destruction of the natural environment as moral evils that we are called to combat. He argues in favor of support of families, food for those facing malnutrition, education, access to health care, fair treatment of the “stranger,” and he disdains the death penalty.

St. John Paul II repeatedly calls people of faith and people of good will to do all they can to support a broad-based culture of life. That is why I am always surprised when someone assumes that if I and others are linked to groups or actions that oppose the death penalty, foster racial justice, or focus on care for the natural world, we somehow don’t care about abortion.

So, yes, I have joined South Carolinians for Alternatives to the Death Penalty, am a regular on webinars and presentations on behalf of racial justice and advocate for the Laudato si’ Action Platform — a Catholic pro-environment plan, to which our diocese has committed. But I also carry signs in the trunk of the convent car that I display at numerous public witness events and marches. They say, “Stop Abortion Now,” because a Supreme Court decision doesn’t convert hearts or state legislatures; and “El aborto lastima a las Mujeres,” Abortion Hurts Women, because one of our prevalent lies is that abortion is about “women’s health” and “reproductive rights;” a bumper sticker on the convent car urges praying the rosary to save America.

All of these go together — see Deuteronomy 30:19-20 and John 10:10. The Eucharist, Scripture, our magisterial Tradition and the counsels of our saints are all about choosing life, in multiple ways, so that we and others may live.

Sister Pamela Smith, SSCM, Ph.D., is the diocesan director of Ecumenical and Interreligious Affairs. Email her at psmith@charlestondiocese.org..