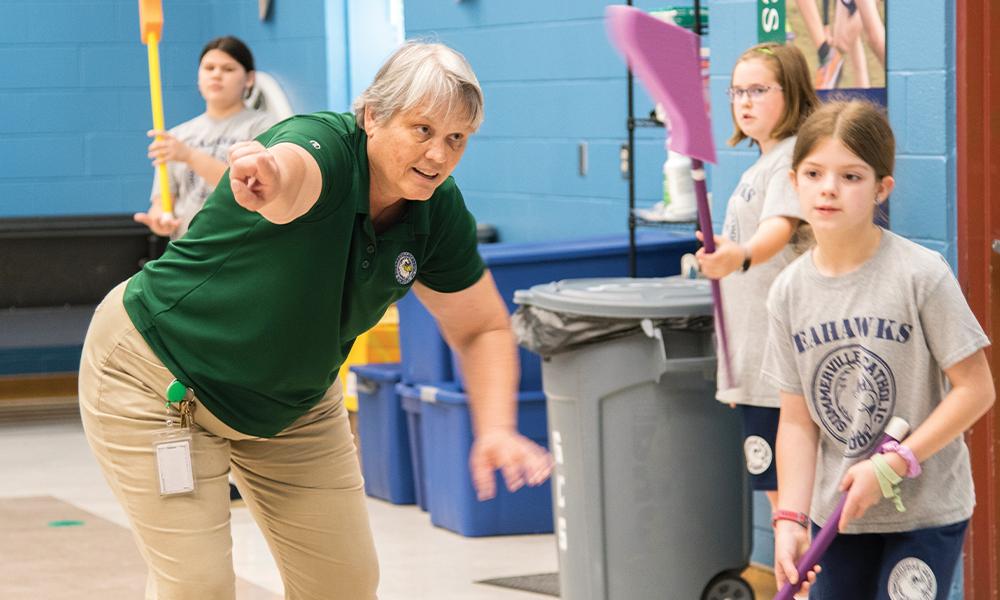 Winning first place for three out of the past four years at the Holiday Festival of Lights giant greeting card display takes more than just luck. It also takes a physical education teacher who just so happens to be a talented and gifted artist

That’s what the Summerville Catholic School (SCS) has been blessed with.

When strolling through Santa’s Village at the Holiday Festival of Lights, you might have seen the large wooden boards decorated by different area schools.

In the 2021 contest, there were 28 student groups from Charleston, Berkeley and Dorchester counties competing for first, second and third place in three different divisions — elementary, middle and high school.

Jean Fox, PE teacher and athletic director at SCS, has been at the helm of this creative endeavor since the school decided to enter in 2018.

It may seem out of place for a PE teacher to be involved in an art project, but Fox has painted four different murals at the school over her 31-year tenure and she said, “Art is just a part of me.”

The schools receive the 4-foot x 8-foot piece of plywood in September and they have a month to complete their Christmas masterpieces.

She said that the ideas for the different giant greeting cards that they have created over the years evolve from visions Fox has had and themes that eventually take shape.

Fox said they always like to do a theme that depicts life in the Lowcountry.

The most recent gift card they created in 2021 featured a palm tree with flip flop ornaments, a dolphin, Santa Claus surfing a wave, an oyster shell and, of course, an iconic crab.

“Tis the Sea-Sun” is written on the card to tie up the theme.

Fox said that the students and staff always get involved in creating the cards. For the 2021 card, a grandparent cut out the flip flop ornaments for the tree and each elementary class decorated one. She said that the older students took on painting the larger pieces of the project.

Although the PE teacher may not be the most obvious choice for heading up this artistic project, Fox said that she was the art and PE teacher for her first two years with the school back in 1991 and 1992.

Everyone at SCS knows about Fox’s hidden artistic talents, which is why she heads up the Festival of Lights giant greeting card project.

Fox’s roots run deep at the school. As a single parent whose son attended the school, she thought of her coworkers as an extended family. Twice they came to her side when she battled breast cancer in 2008 and then ovarian cancer in 2019.

For breast cancer, Fox underwent six chemotherapy treatments and radiation. For ovarian cancer, she endured another six rounds of chemotherapy and surgery.

“Those were difficult times,” she said. “I wouldn’t have made it without the support from the school, as well as from people at the St. John and St. Theresa parishes in Summerville.”

She is now completely cancer free. “My doctor is even surprised at how well I am doing. I have surpassed all his expectations.”

Fox said that many teachers have come and gone over the years, but she plans to stay and retire from there. Her 3-year-old grandson will also attend school at SCS.

The first-place prize in the Holiday Festival of Lights giant greeting card contest also came with a monetary reward of $300 that Fox said she gave back to the teachers at Christmas.

“They deserve something extra at Christmas,” she concluded. “In the end, I’m glad we won it for them.”