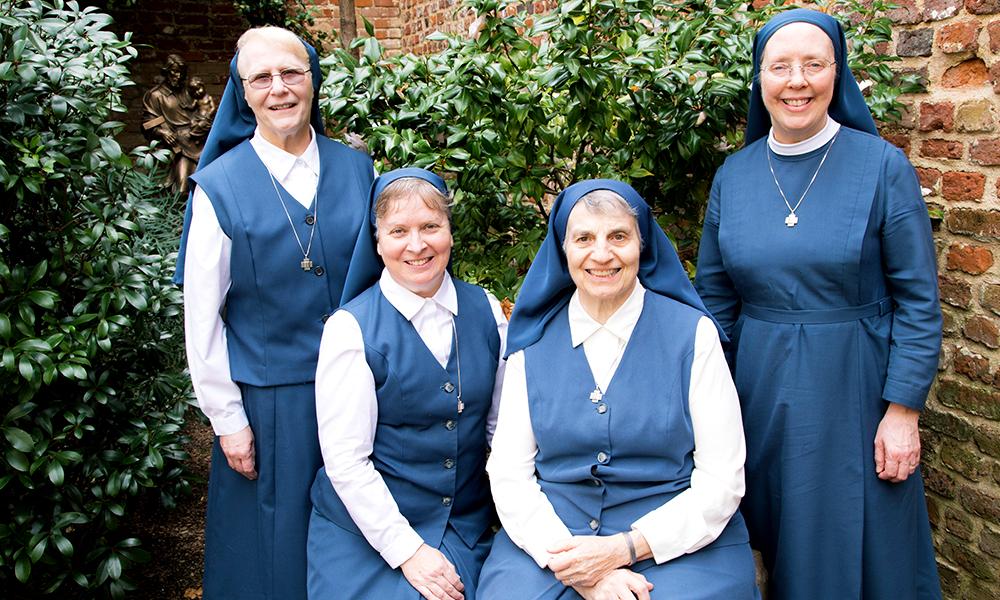 For almost 40 years, women religious of the Daughters of St. Paul have graciously occupied the building at 243 King Street, at the corner of King and Beaufain in Charleston. This prime location has hosted countless community gatherings, prayer groups, events — including Piccolo Spoleto — and of course, shoppers. It is also the location where four sisters live, work and pray. Over the years, dozens of Paulines have taken on the mission of running the Book & Media Center, some staying for over a decade and some for a few months before moving onto other missions. Every sister has left her mark.

For the shoppers, whether frequent or brand new, a visit to the Paulines is an experience like no other.

One reviewer wrote that it “is more than just a store, it is a place of spiritual renewal.” Another said it was a warm and pleasant space filled with people ready to love like Jesus did. And yet another said it is simply a beautiful and peaceful place to escape the hustle of daily life. “We are so blessed to have a Pauline Media Center and the wonderful Daughters of St. Paul that are a joy to converse with,” the person added. It is, as former staffer Sister Jane Livingston once called it, “the walk-in clinic of the soul.”

It’s remarks like these that make it more difficult to see the downtown business coming to a close in January 2023.

In April of this year, the Office of Provincial Superior in Boston announced that four of the 13 physical locations of the Pauline Book and Media Centers will close — Honolulu, Chicago, San Antonio and Charleston.

As much as the sisters realize the void their departure will create, they know they are being called to new and diverse pastoral opportunities within their congregation. Consolidating the four locations will free up those sisters to take on missions in other cities around the U.S. and Canada.

“Today’s means of communication provide tremendous opportunities to invite people to a relationship with Jesus Christ,” Sister Donald Maria Lynch, provincial superior, said in a letter. “We’ve had several people tell us that they are entering RCIA this year because of online interactions they’ve had with our sisters who have guided them towards truth. To better reach those who have yet to hear the Gospel, we have made decisions for growth: growth of our vocational witness, our religious communities and our mission.”

Sister Tracey Dugas, director of mission advancement for the Daughters, said the move will allow the order to build bigger teams of sisters, “and to reach people that we typically can’t reach. We look forward to building up our communities, using our gifts and expanding our message. We will be able to be out in the communities more where the world needs us the most. People want something deeper. They want something that lasts. We will be there to share that wisdom.”

Sister Margaret Kerry is the manager of the Charleston location and has been there for the past nine years, but this is actually her second stint here. She said all four of the sisters will be moved to a different Pauline bookstore according to needs.

“Things are fluid. We don’t know yet where we will go, but we look forward to continuing the Pauline mission,” she said.

There is currently no plan for the building, which recently received a new roof. Sister Margaret said there will be sales at the end of 2022 and plenty of parting events, including a commemorative ceremony for deceased benefactors, a concert at the Charleston Gaillard Center, garden events and a book sale for the Knights of Columbus. The women religious will continue to pray every day with the community and offer spiritual guidance.

Plus, Sister Margaret said to look for them online after they depart the Holy City. They plan to continue a robust social media presence and sell books online.

“We are praying for God’s will for this special building,” she said, “which is the best location in Charleston.”

In the meantime, Sister Margaret asked for prayers for her and the other sisters who will be moving on to new assignments, and for filling the void left by the closing of the sole remaining Catholic store in South Carolina.

“This has been so much more than a bookstore,” she concluded. “The presence of St. Paul is powerful regardless of what lies ahead.”