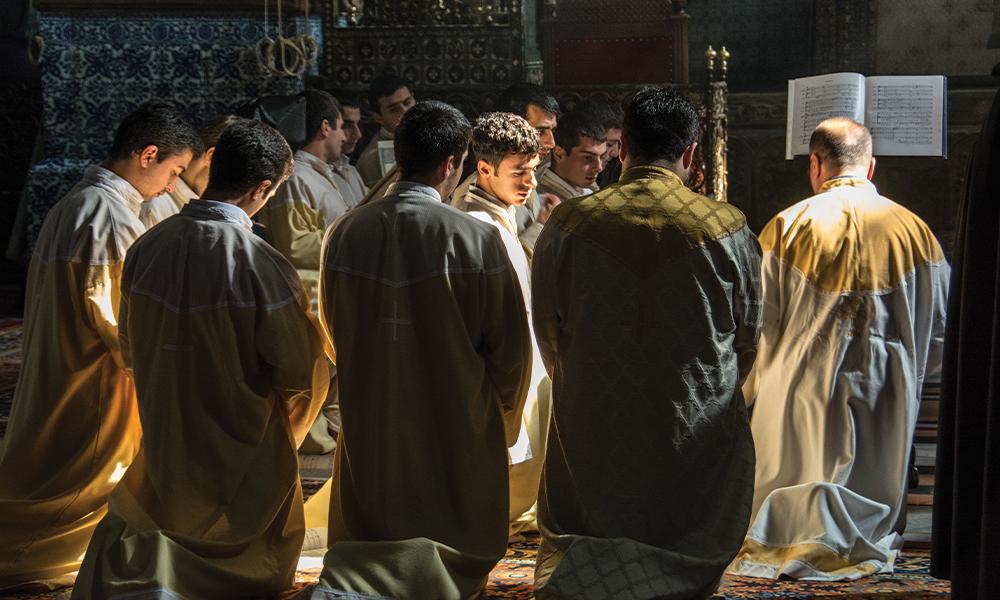 The Mass as the Highest Form of Worship

In our previous articles in this series, we looked at the Eucharist as a sacrifice and as a meal. In the process, we unpacked a bit of what those mean for us. We found that they are both rooted in the forms of worship we find in the Old Testament and in Jesus’ time. In our present installment, I would like to “zoom out” a bit and look at the Mass as the fullness of worship.

In recent years, much has been written on the connection of Christianity and Judaism, and rightfully so. The only way to really understand the message of Christ and the newness he brings is to also understand the context in which he came to us and the tradition that he fulfills. In Jesus’ time, there were two major venues for Jewish worship: Synagogue and Temple. First century Judaism was marked by both forms of worship, and the Gospels tell us that Jesus himself took part in them.

The Temple in Jerusalem was the place of sacrifice and offering. Many of the prescriptions for temple worship and the norms for the priesthood described in Leviticus were exercised by the tribe of Levi (hence the name of the book). Leviticus is part of the Torah, or Law — the first five books of the Bible, also called the Pentateuch — and thus is part of the covenant given through Moses at Sinai. So, temple worship is the form of worship specifically prescribed in the Law.

On the surface, the practices of sacrifice and offering outlined in Leviticus are not that different from some of the worship practices of other ancient cultures, like sacrifice and burnt offerings, etc. The big difference is that this worship was offered to the one true God of all creation, not a false national deity or localized idol.

Because of this difference, worship in the temple was really distinct in intention and character from the worship practices of other nations. These latter practices aimed at idols tended toward the superstitious and were often characterized by other practices that brought out the worst in humanity (e.g. cultic prostitution and child sacrifice).

Israel’s practice of offering and sacrifice in the temple, by contrast, was aimed at recalling that all we have comes from God, and that our hope, too, comes from and is aimed toward him. This affirmation of the goodness and giftedness of God’s creation is something that remains at the root of Christian sacramental worship — the transformation of natural elements into something more and greater — because the God of creation is also the God of redemption and salvation.

As we have explored before, we encounter the perfect sacrifice of Christ in the Mass. Paul’s letter to the Hebrews quite explicitly points out that fact. As Christians, then, this paschal (Passover) sacrifice of Christ is the highpoint of our worship to which all the sacrifices in the temple have always pointed.

All the purposes the various offerings served — atonement, thanksgiving, petition — are taken up in the one, perfect offering of Christ. Furthermore, all the history of salvation, God’s saving work in Israel, up to that point is taken up and given a higher purpose in Christ extending the offer of eternal life.

Synagogue is a Greek word meaning “to gather together.” It is used throughout the Septuagint — the Greek translation of the Old Testament that was prominent in Jesus’ time — to translate the Hebrew word, qahal, referring to the “assembly” of the people of Israel. It is also translated by the Septuagint as ekklesia, the word used in the New Testament for “church.”

Synagogue worship is the form of Jewish worship we are most familiar with today, and it has a long history. It seems to have arisen around the destruction of Solomon’s Temple by the Babylonians circa 586 BC. Temple sacrifice ceased for a time and many of the people of Judah were sent into exile. This form of worship centers on Scripture, particularly the Torah, and recited prayer.

When the temple was rebuilt and rededicated by the Jewish governor Zerubbabel in 516 BC after the end of the Exile (see Ezra 6), temple worship resumed alongside synagogue worship. This Second Temple was later expanded by Herod in Jesus’ time. Around 70 AD, the Romans besieged Jerusalem and destroyed it. The Second Temple was never rebuilt after its destruction. This has had an enduring effect on Judaism, characterized solely by synagogue worship ever since.

One of the great things about the Mass is that it is the fulfillment of both forms of worship active in Judaism at the time of Jesus’ public ministry. We see this already modeled in the road to Emmaus, where Christ himself accompanies his disciples on Easter Sunday by unpacking the Scriptures for them and allowing them to recognize his presence “in the breaking of the bread” (Lk 24:35). Following this template, our Mass consists of two major parts: the Liturgy of the Word and the Liturgy of the Eucharist.

As Christians, we do not see this as canceling the practices of our ancestors in faith, but rather bringing them to their completion in Christ. Therefore, the Mass is the highest form of Christian worship and calls forth our active participation.

This is Part 3 of his series on the Real Presence.

Michael Martocchio, Ph.D., is the secretary of evangelization and the director of the Office of Catechesis and Christian Initiation. Email him at mmartocchio@charlestondiocese.org.