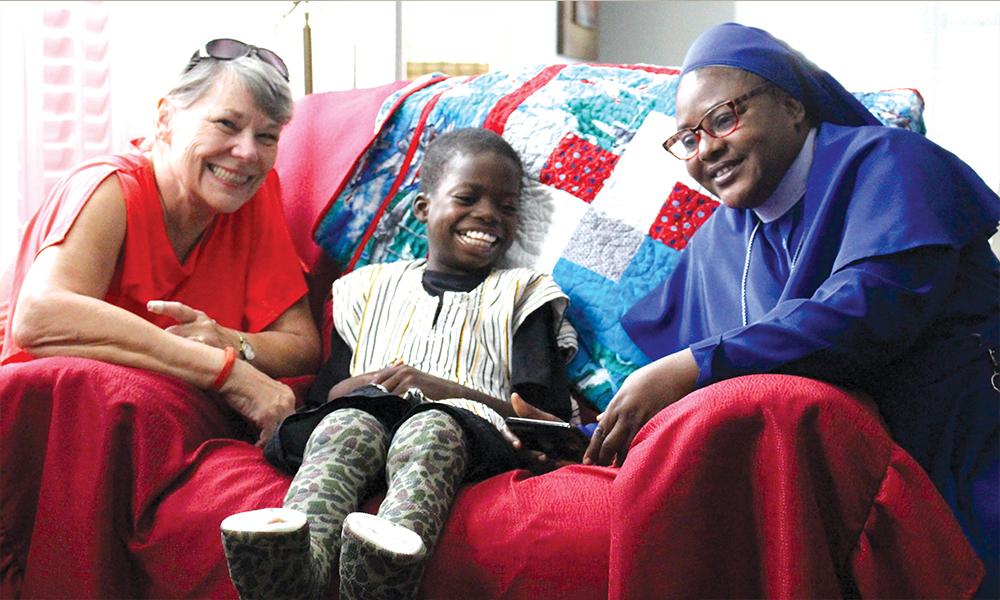 Parents Step Forward in Faith With Adoptions From Other Countries

For Adele and Doug Darnowski, who hail from the Midwest, adopting five disabled children from a foreign country was not necessarily something they planned to do.

Adele said that early on in their marriage, before the birth of their nine children, they talked about adopting from Ukraine after seeing a special on television.

“At that time, we didn’t know if I would have a hard time having kids, and we knew we wanted them,” Adele explained. “It was something we talked about doing a very long time ago, and I guess it just never left my mind completely.”

It was a similar situation for a South Carolina couple who, later in life, became the legal guardians of a young boy from Ghana. Although for the Tuckers, becoming parents to Saviour was not something they ever thought about doing, they, too, heard about an orphanage through an outside source, and the experience stuck with them.

Adele and Doug and their nine biological children, ranging between the ages of eight and 18, knew they still had room in their hearts for more children in the family. The five children adopted from Ukraine — three of whom became a part of their family in December 2020 and two in December 2021 — were actually not the first children they adopted.

The Darnowskis adopted a child from China in 2007, who at that time was two years old.

“She has some missing fingers and toes, she’s hearing impaired and reads at the third grade level and really perfect in every way,” Adele explained of their daughter from China who is now 18.

The decision to adopt from Ukraine stemmed not only from seeing a special about an orphanage there, but also from speaking to friends who adopted from there previously. Adele said that Ukraine was very welcoming of them even though they were older parents who already had a large family.

The decision to adopt these five children — all with Down Syndrome — did not come lightly for the Midwest family.

“We knew all our kids had to be on board to help out and to assure us that they would care for them as they may outlive us,” she said.

As it would later turn out, with the Russia invasion of Ukraine in February 2022, the Darnowskis very likely saved the lives of these five children.

“One of the children had been evacuated before due to attacks, and she still deals with trauma from that,” said Adele.

Since the children have left Ukraine, Adele reported that they have flourished. When she took them in, they were all malnourished, had sensory issues and other emotional problems.

“They are thriving now. I think they are very happy here,” she said.

The family drives around in a Starcraft Bus, which seats about 20 people. The Darnowskis, however, use the seating space in the back of the vehicle for two wheelchairs. Their favorite vacation destination happens to be Myrtle Beach, where they visited this May. Joan Cushing of St. Michael Church in Myrtle Beach showed them around the area during their most recent visit to the Palmetto State.

“They have come to visit before, and I just noticed them,” Cushing explained. “I reached out and asked them if they needed any help with getting around in the area. I told them about the Our Lady of Joyful Hope shrine in Kingstree, and they were thrilled to go see it. We made a plan and had a wonderful day visiting the shrine with Father Scott Frances Binet and the Missionaries of Mercy.”

Doug, a dedicated father, is also a college professor and is starting the St. Therese and Isidor Farm College in the Midwest. This Catholic college will be mostly for teaching trades, but also will welcome Catholics to live out their faith.

That same Catholic faith means so much to the Darnowskis, which is why they felt called to adopt from Ukraine.

“It hasn’t been easy, but at the same time, it’s been wonderful,” Adele concluded. “God gives us the grace to do this. We are a family and we take care of each other. We just knew in our hearts that this is what we were meant to do.”

The chilling story of what Saviour survived as a baby in Northern Ghana is not for the faint of heart. Saviour was born with cerebral palsy, and in that part of Ghana most babies who are disabled do not survive to toddler-hood. The reason? A “concoction” man, hired by parents, will poison a child because it is believed that babies born with disabilities are in some way evil.

Bill Tucker, Saviour’s guardian here in the U.S., explained that Saviour’s mother likely couldn’t afford the concoction man, so the child survived. However, an early memory for Saviour was being left in the bush alone, somewhere around the age of three, where a priest found him and brought him to the orphanage in Ghana.

Hearing about this orphanage at church, Joan Tucker decided to visit since she was a retired nurse. And that is where she met Saviour when he was eight years old.

“Something drew me to him,” she said. “Maybe it was his bright smile or his positive demeanor. He stole my heart.”

He was able to come back to the U.S. with Joan on a medical visa, and she wanted to help him get proper care for his cerebral palsy.

Eventually, the Tuckers were able to enroll Saviour into the Charleston County School District, though he was severely behind in learning at the time.

Now age 15 and attending Wando High School in Mount Pleasant, Saviour reads at a third grade level. The Tuckers believe he will catch up to his classmates soon.

Bill Tucker said, “He is determined and is very smart.”

Saviour has limitations with three of his limbs, but mentally he is fine. Bill said that Saviour talks about being a veterinarian one day, and he very well could be. The Tuckers were able to obtain a green card for Saviour that will last for the next 10 years before he will have to reapply.

The Tuckers discovered that he qualified for certain services, so in addition to being on Bill’s health insurance, he also receives Medicaid, which greatly helps with Saviour’s medical care.

The Tuckers are not able to officially adopt Saviour due to Ghana’s strict adoption process, but they were able to become his legal guardians until he is 18 because he was an abandoned child. Saviour will be able to attend public high school until he is 21, if necessary, because he has special needs. Joan described the community support as phenomenal.

Their church, St. Benedict, has assisted with raising money for Saviour’s care. Joan said the Knights of Columbus have also been supportive.

“It is just amazing all the generosity we have encountered. We have had Christmas trees donated, and we have even had people come up to us while shopping and just give us money. It blows my mind,” she said.

The Tuckers relayed that their main concern is Saviour’s future. They hope to assist him with becoming more independent.

“We are working on his reading and on him using both his hands,” Joan said.

The Tuckers, in their 70s, have daughters between the ages of 46 and 51. Joan said she never thought she would be raising another teenager, especially not a boy.

“This is definitely a surprise in life for us,” she said. “He is all boy with a mustache now and everything.”

They have written a book about their experience of raising Saviour called Saviour’s Story. It describes his life in Ghana, his journey to the United States and how things are currently going for him in South Carolina. All proceeds from purchases of the book will go to the orphanage in Ghana called Nazareth Home, of which Joan and Bill are board members.

The Tuckers look forward to watching Saviour succeed in life as he grows older.

“He inspires us,” Joan said. “We love him. We just know he has a bright future ahead of him and we look forward to seeing where life takes him.”

Visit sisterstanschildren.org for more information on Nazareth Home in Ghana.