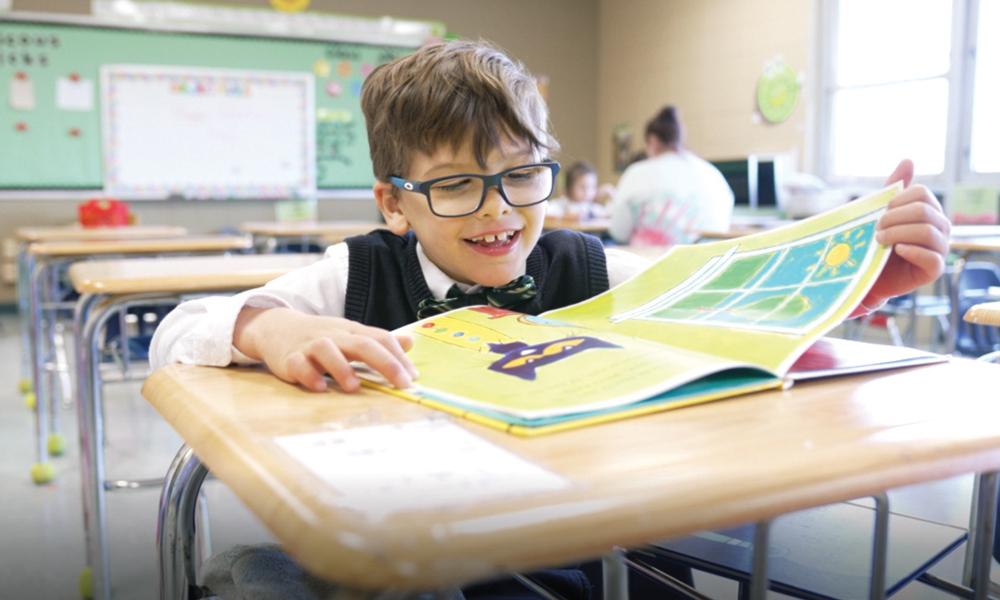 One Chance Leads to a Lifetime of Opportunities for Special Needs Student, Wyatt

Meet Wyatt Wingard. He is a kindergarten student at St. Joseph School in Anderson. Wyatt is diagnosed with autism, but to his parents, teachers, therapist in applied behavior analysis (ABA) and friends, he is a typical 5-year-old boy who loves dinosaurs and LEGO®. Wyatt plays on the school basketball team and plays tag on the playground. He loves to make people smile and is a light to those he meets. Most people would not be able to pick him out from any other of his classmates.

But, before becoming a student at St. Joseph, Wyatt had limited opportunities to succeed in a classroom.

This all changed when the Wingard family chose the Ander-son school in 2020. After exploring every public-school option in the county, parents Chris and Elizabeth decided that St. Joseph School was meant for their family.

“I felt like we were on borrowed time, and we needed to keep moving forward rather than moving backwards,” Elizabeth said. “When we came to St. Joseph, it was immediate. We could start exactly where we needed to be and move forwards instead of going backwards.”

“I said, ‘God if we’re here to help him, just guide me, guide me with the right tools, with the right aids so that we can help him,’” she said. “And the first time I met him, I just knew it was going to be okay. It just felt right.”

Wyatt started his first day of 4K in August of 2020 accompanied by his licensed ABA therapist, Kelly Schuster.

“When I first met Wyatt, he was quiet and struggled to keep eye contact,” she said. “Since then, Wyatt has jumped leaps and bounds in his interpersonal skills. Now, he creates his own games, collaborates with peers, is making friends and doing all sorts of fun things. It has been amazing to watch him grow and develop just over a short year and a half.”

Schuster attributes the success to Wyatt’s socialization in a small classroom setting with peer play and one-on-one attention.

Wyatt’s experience at St. Joseph has been described as unbelievable, everything about it.

“He has had so much help from the teachers, staff and Principal Giuliani. It has just been great,” said his father, Chris. “We go to church at St. Joseph and the church is a blessing. That’s all I can say. It is a real blessing. Catholic education is so important to our family — I don’t know where we would be without [the Church] for Wyatt’s sake.”

The kindergartener’s story serves as an example that when accommodations are made for those who need them, and without hesitation, lives can be transformed.

“We brought Wyatt in, and we knew that it wasn’t going to be easy,” Elizabeth said. “But they gave our baby a chance that we weren’t sure anybody was willing to take. And I feel like it has set him up for the rest of his educational career.”

“It is just a big miracle to see his transformation and his smile just gets bigger and bigger every day,” Giuliani noted. “We know there are more students like Wyatt, and if we just take the chance, we can give them a great opportunity.”

To that effect, Catholic schools across South Carolina serve over 740 special needs students. The mission of Catholic education has always been for children to encounter Jesus, first by fostering an academic culture, and then aimed at the pursuit of truth by providing an environment in which students are motivated to grow in virtue.

Catholic schools in the Diocese of Charleston pursue this mission by meeting students, including those with special needs, exactly as they are, where they are in development and then assisting them to grow in body, mind and spirit.