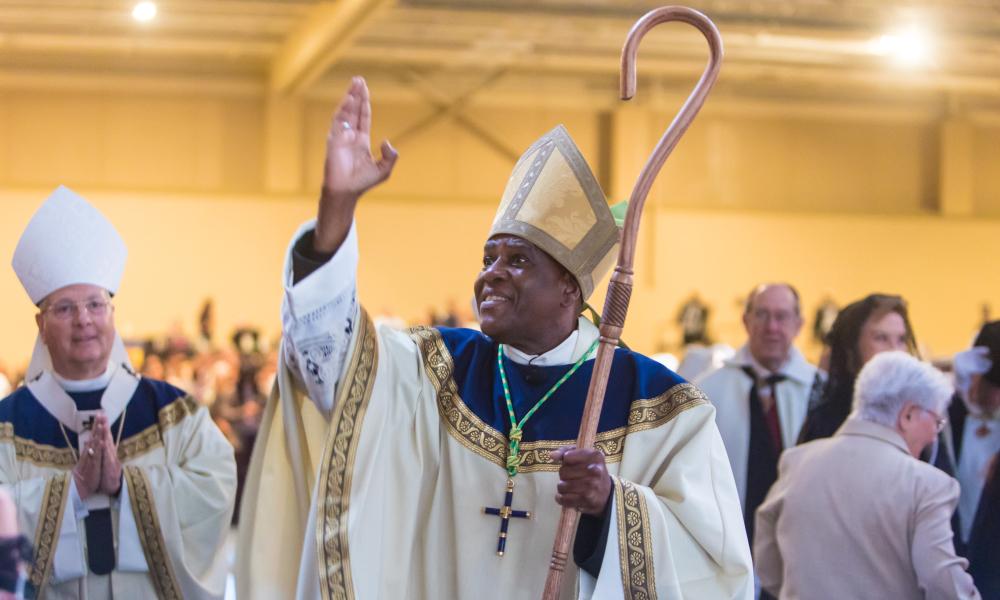 The Charleston Area Convention Center transformed into a church for the thousands who attended the ordination of the Diocese of Charleston’s new Bishop Jacques Fabre-Jeune, CS, on May 13. A large altar held dozens of clergy who accompanied Bishop Fabre on this joyous occasion filled with vibrant Spanish song, music from his native Haiti, Scriptures read in Creole and Spanish, and members from his former parish in Georgia — all cheering him on as he accepted this sacred journey.

Accepting his new role, he walked around the crowd holding up the letter from Pope Francis confirming his appointment. Later, as bishop and holding his crozier, he went through the congregation and, forming the sign of the cross with his hand, blessed the diverse group who came to bear witness.

The crowd consisted of a variety of Catholics — white, Black and Hispanic. There were also dignitaries in attendance, such as state and city officials, including S.C. Lt. Gov. Pamela Evette, plus other religious leaders, including Rev. Canon Ruth Woodliff-Stanley, bishop of the Episcopal Diocese of South Carolina; Bishop Samuel Green, Jr., of the Seventh District AME Church; and Bishop Chip Edgar of the Anglican Diocese of South Carolina.

“Sanctify the people in your care,” he said during his homily. “Stand in the midst of your people. Pray with them and for them as you together with each one of them [to] seek the face of Christ.”

He also urged Bishop Fabre to listen to his clergy before attempting to govern them.

“Seek their advice and wisdom in order to care for them with prudence,” the cardinal said.

Bishop Fabre was embraced by attending bishops directly after the consecration. This part of the ordination, called the “Fraternal Kiss,” is a welcome to the new bishop by his fellow bishops. Included in this welcome was Bishop emeritus Robert E. Guglielmone, who Bishop Fabre personally thanked later for being so kind to him.

“I know I will be surrounded by people who love the Church and will do their best to receive me. Thank you,” he said.

Bishop Fabre was born Nov. 13, 1955, in Port-Au-Prince, Haiti. He comes from a family of eight, with six children: three boys and three girls. He later moved to Brooklyn, N.Y., which is also where he attended high school and completed secondary education.

Bishop Fabre joined the Missionaries of St. Charles, or Scalabrinians, and took vows in 1982. He was ordained four years later in October 1986 in Brooklyn.

He was first assigned to Our Lady of Guadalupe in Immokalee, Fla., from 1986 to 1990. For the past 36 years he served in a variety of roles in Delray Beach, Fla.; Colombia; Guantanamo Bay, Cuba; Dominican Republic; Rome; Athens, Ga., and since 2008, in Forest Park, Ga., at San Felipe de Jesus Mission.

Many Scalabrinian fathers were in attendance, along with parishioners from San Felipe de Jesus — who expressed sadness to see him leave, but excitement at the same time. The large group of over 1,000 people gave the loudest cheer upon Bishop Fabre’s recognition.

“You are going to be the bees of Christ,” the new bishop said in remarks after Mass. “Not to sting, but to work hand in hand to build the kingdom of God, where everybody can find sweetness and life. That’s what bees usually do.”

He also used a head of lettuce as an analogy to personal life, family life, community and the country.

“When we look at a person, sometimes we see negative things, or in a family or community or race. Wherever there is egocentric attitude, if we take that out, we see something better,” and Bishop Fabre began to peel the lettuce as he made each example. “If we take out the lack of esteem — sometimes that pushes us to be against others — we can see better leaves. If we can forgive historical mistakes and accept frailties of others — we can find even better leaves.”

He continued to peel the lettuce, taking away “divisions” and “thinking we are better than others” and those who are “unable to see the common good.” He added, “And the list goes on.”

Lastly, he said, “Pray for me and work with me as I will do with you.”

The full ordination can be viewed online at youtube.com/diocesechas.