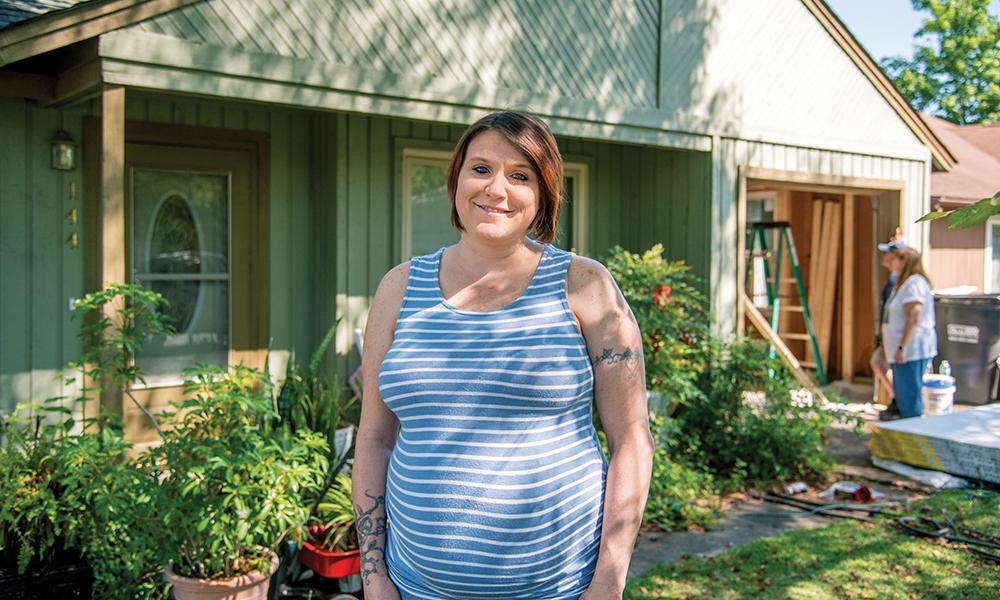 For Melody Jordan, 2022 has been the year of surprises. As the mother of a 20-year-old daughter, Melody was surprised to find out she was pregnant again in January, albeit two decades later. But probably the most shocking aspect for her has been the kindness shown to her from total strangers.

Melody admits she was not in a healthy relationship with her baby’s father.

“We had been together for four years, and he was abusive both physically and verbally,” she said.

She was living in Jacksonville, Fla., at the time, but when she found out she was pregnant, Melody knew it was time to “get out.”

Her mother and daughter were living together in Summerville, S.C., so Melody decided to move back for their support. The problem — it is a two-bedroom house. That meant that Melody would have to share a room with her mother, which was fine for now, but not when the baby arrived.

Melody and her mother, Linda Jordan, began looking for organizations to help.

“At first, we were looking for places for me to live with the baby for a while,” like St. Clare’s Home in the Upstate.

Then, Linda had the idea of turning the attached garage into a bedroom and living space, but they could not afford the renovation on their own. The duo reached out to the Diocese of Charleston’s Office of Family Life for support. Kathy Schmugge, director of the office and senior director of Social Ministries, went straight to work when she heard Melody’s story.

“I started calling contractors,” Kathy said, “but many of them said this project wasn’t in their scope. Melody was so concerned, and she was calling me often for updates. I was afraid that she would give up, and I tried to reassure her and be supportive of her as I tried to research other solutions.

“I then turned to one of our Catholic Respect Life leaders in Charleston who leads Pro Life Charleston and is in the Knights of Columbus. … I asked him if the Office of Family Life could support him with the material costs, could he help me find someone to help this mom in need. He not only agreed but became the project leader of the garage conversion,” she explained.

That Respect Life leader is Alexander Palyo, who also happens to have his own construction business called Fix-It-Right. Alex is also the founder of Pro Life Charleston, the umbrella organization for 40 Days For Life, Sidewalk Advocates, Holy City Pregnancy Center Mobile unit and the Holy City Pregnancy Center Care Teams. Helping a mother in need is right up his alley.

“At first, Kathy asked me if I knew any contractors that could do this, and I said, ‘Well, you’re talking to one,’” Alex said.

With the financial support from the Family Life Office, the expertise of Alex as the leader of the project and volunteers from Pro Life Charleston, the Jordan’s garage conversion to a mother and baby suite is well on its way.

Alex explained that the first thing they did to the garage was, of course, to clean it out.

“That was a project in and of itself as you can imagine,” he said. “It was used for storage.”

They had to make room for a utility area in the back for a washer, dryer and water heater. The main part of the garage would be the bedroom. Alex said that the whole garage was 26” x 10”, but with the utility area, they only had 16” x 10” to convert.

They put down a wood floor, built three walls and one large closet, and installed a window on the side. The team also put in a door on the back wall.

Alex said that the biggest part of the project will be installing an air conditioner, which he said could cost as much as the whole renovation of the garage to this point. They plan to install a mini-split air conditioning unit.

They left some space in the front of the garage for storage since they did not remove the main garage door.

“This could be used for smaller items like paint containers, things like that. Plus, this way, they could easily convert it back into a garage one day,” he said.

The team also installed electricity and a light fixture. Alex and six volunteers worked throughout Memorial Day weekend, working in shifts over the three days. Since they volunteered on weekends around their daily schedules, the team expected to complete the project sometime in July.

Melody said she is still in shock that all this is happening.

“I never thought anyone would ever do something like this for me. It’s really overwhelming. I have been so blessed,” she said.

Melody and Linda are looking forward to painting the new baby suite and decorating it. She will welcome a baby girl, Charlie Olivia, in September.