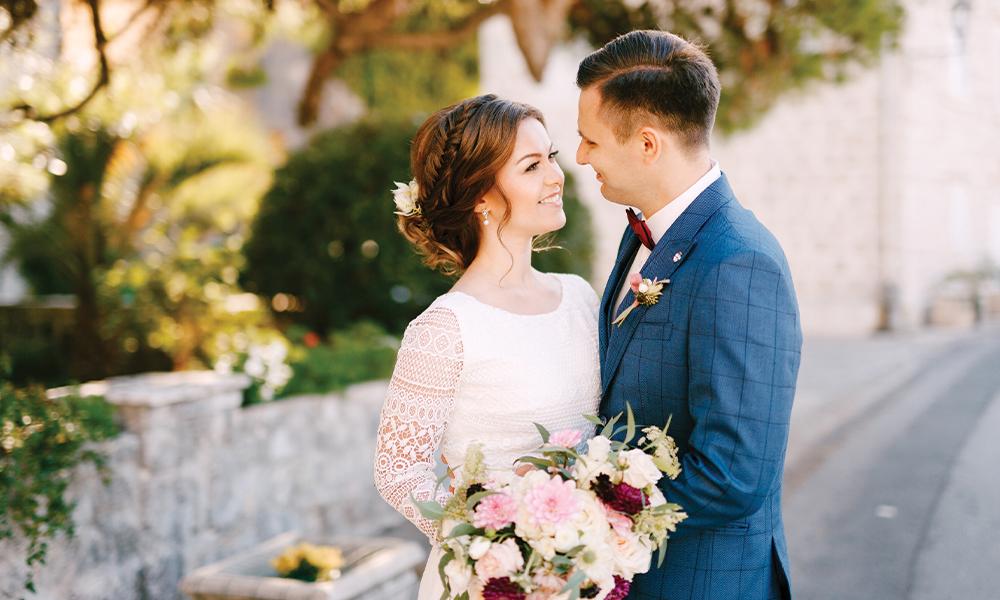 That was the advice of a woman flying to Texas to celebrate her golden wedding anniversary, as she and her husband traveled around the Lone Star State to toast 50 years of marriage.

God’s heart is much bigger than Texas, so she wants couples discerning marriage to know that while they will encounter hardships in their walk through life together, God will guide them through.

That guidance begins this year in the Diocese of Charleston, which just received a $50,000 grant from the Catholic Marriage Initiative. Matching funds would double that to $100,000.

Kathy Schmugge, senior director of the offices of Social Ministry and Family Life, is wasting no time putting those funds to work.

She is establishing a three-year pilot program in the state that features four pillars:

1. prayer and relationship with Christ;

3. accompaniment in knowing you are not alone in your journey from marriage preparation to sustaining a healthy marriage;

4. and advocacy that promotes the need for marriage in a culture that is sliding dangerously away from God’s call to couples and families.

“We need to speak about the fruits of marriage and help couples sustain it,” Schmugge said.

She wants to reach young adults who grew up in families ripped apart by divorce and separation, which have left them with deep emotional scars. Many of them shy away from marriage because of those scars. They don’t want to repeat the mistakes of their parents, Schmugge said.

“They say, ‘I never had a home; I had a suitcase, and I moved back and forth.’ That really struck me,” Schmugge said. “If you grew up in that turmoil, you are going to be afraid that will happen to you.”

To address this, Schmugge is using the grant to establish mentoring couples with solid, joy-filled marriages who can show younger couples that life is worth the leap into this precious sacrament.

Natalie Burt, administrative assistant to Schmugge, said these mentoring couples must be authentic.

“We need couples that can model a good relationship,” she said. “Authenticity is huge. These young adults are watching us — how we are interacting at Mass, in restaurants, at stores. We can’t be fake.”

She said many don’t even know what a healthy relationship looks like.

“Our young adults might even believe that being married is old-fashioned. We need to not only preach love, we need to model it.” she said.

Schmugge and Burt are putting out the call for couples with healthy marriages to volunteer to begin a marriage ministry in their parishes and communities.

“It can start small and simple, making a difference one couple at a time,” Burt said.

Love is a decision, not a feeling

For those who are dating, Burt urges them to “prayerfully discern if this is who God wants you to marry,” then work on developing healthy relationship habits.

Burt advises those who are engaged to take advantage of this time to grow as a couple and to really open the lines of communication.

And for those who are cohabiting and want to share their lives with each other, Burt recommends making it official.

“Do whatever you have to do to make your marriage better. You will be happier for it,” Burt said. “You both win.”

One couple already involved in the marriage ministry is Gary and Cheryl Ludlam.

“Most couples are interested in communication skills,” Gary Ludlam said. “That’s a big area. So is conflict resolution,” he added.

He also said that they stress family planning and the importance of chastity before marriage.

The Ludlams want couples to go into marriage with their eyes wide open.

“When love is new and you are flush with romance, it is easy. Later on, it is going to be trickier,” he tells couples. “You’re going to be dealing with complex issues like children and in-laws.

“Love is a decision and not a feeling,” he continued. “Feelings come and go, but the decision to love the other is what makes marriage work.”

The marriage grant provides a win for Spanish-speaking couples also. Funds have allowed the diocese to bring Maria Inez Romero into the Family Life office.

Romero is exploring several programs that cater to Spanish-speaking couples whether they are dating, engaged or married.

She already is looking into marriage retreats.

“We would like to engage the family, to keep alive God in these families,” Romero said.

One program she wants to implement is “Fully Engaged.”

“We found this in Spanish,” she said, and “we want priests to review it.”

Another program she wants priests to examine is “Witness for Love.”

“They do have the material in Spanish,” she said, adding that the office is looking at programs that will help center families in Christ and build up their faith.

Romero is excited about this grant and how it can help Spanish-speaking communities in the diocese.

“Twenty-five years ago, I didn’t know how to say the Hail Mary in English,” Romero said.

“Learning the program in English is different because the cultures are totally different. A lot of times things are lost in the translation. If you find somebody who speaks their language, you feel at home. This will help out,” she said.

And in 50 years? Perhaps they will celebrate their golden wedding anniversary with a walk across Texas. And when they return home, they might offer sage advice about marriage to another generation of young adults.