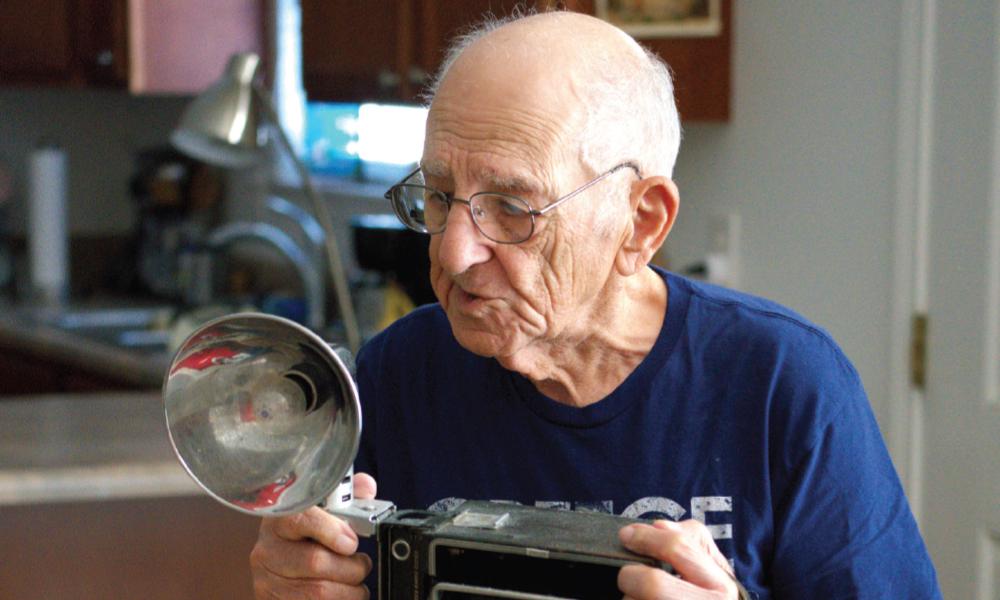 Ralph Conte was asked about his secret to a long life, but his heart and soul are in his life’s passion — photography. He finds beauty in God’s creations, captures it on his camera, then freezes and frames it forever for all to see.

Perhaps that is why, at 102, Conte still feels young. God’s beauty never grows old, and he continues to get a focused view of it through his lens everywhere he goes.

Lately he favors “5,200 feet up the Blue Ridge Parkway, late in the year.” That is an awe-inspiring scene. “I always ride up there,” he said.

Conte particularly remembers one visit to the Parkway when it had frozen. The memory remains, and the photos keep it sharp. He said nearby Landrum also is unique with all its antiques.

Conte grew up in North Bergen, New Jersey, and photography has taken him to some of the most wonderful places in the world. These days he lives in Greer, attends Prince of Peace Church in Taylors when he can and prays at home when he can’t.

He has two rosaries on his bureau along with a small sculpture of Our Lady. And, he has photos lining the wall, memories of stunning sights around the world captured in perfect moments.

Rockport, Massachusetts, with its lighthouse “is the most beautiful place you can go,” he said. “I made five trips there just to take pictures.”

After that, he and his late wife Veronica took a trip to Switzerland for their 50th wedding anniversary in 1993. He called Switzerland the best place to live, “if you can afford it.” He’s also been to France, Germany and Northern Italy. He’s even snapped photos of the Blue Danube flowing through Budapest, Hungary.

On another journey, a 17-day excursion to China with other photographers, the air quality stifled his efforts.

“The pollution was so bad, I couldn’t take a clear picture,” Conte said. “They wear masks just from the pollution.”

Lighting and shadows are crucial to photographers, he said.

“I hate when people show me shots with the iPhone and all the faces are dark,” he said. “Photoshop today is killing photography. There are no details. It’s all flat.”

“I learned from people who knew more than me,” Conte said. One of them was Adolf Fassbender, a master of pictorial art who was inducted into the Photography Hall of Fame in 1980. Another was Al Gilbert, a Canadian whom Conte called “the best outdoor photographer.”

Conte took their lessons to heart after serving in Patton’s Third Army from 1942 to 1945.

“We landed on Utah Beach, and we just went continually until the end of the war,” he said. “We took some trucks and trains. Most of the time, we walked,” Conte remembers. “I never changed my socks throughout the whole war.”

He was awarded the Purple Heart, and to this day he still salutes those who have fought to keep the United States free.

After the war, Conte came home and started his own photography studio in New Jersey.

But he never stressed about money. Somehow he and Veronica always got by, and he credits her for that.

“She did all the worrying. I don’t know how she did it. I don’t know how she kept me from going broke,” he said. “I never made a lot, but I raised five kids, and I bought five houses. They were all new. And I always managed to go on vacation with five kids. In 1968, we went to Nova Scotia. That is a painter’s paradise.”

For his business, two church events helped bolster the Contes’ fortunes — first communions in April followed by confirmations in June. He said parishioners wanted keepsakes of their children receiving the sacraments. Graduations in June also helped, as did Christmas pictures and weddings.

The 102-year-old still remembers his first wedding shoot in a Catholic church in New York.

“I ran out of film when the ceremony was going on,” he said. “I reloaded the film in the confessional.”

No doubt he shot the rest of the wedding with a clear conscience.

Despite the success with color, Conte does amazing work in black and white. He made a copy from a passport photo of an elderly woman and brought out her details and features so well that he won the Blue Ribbon in a 1961 competition.

Conte is still going strong. When asked his secret to living this long, he replied, “the doctors.” His energy and his spirit keep him going. He stretches with ease, walks 20-30 minutes at a time and lifts barbells.

“You gotta do some exercise,” Conte said. “I just don’t like to sit.”

Photography remains his passion, and he still sells some of his pictures.

He does not drive anymore, but friends take him out, and he still finds beauty in God’s creations.

That is what keeps Ralph Conte so young.