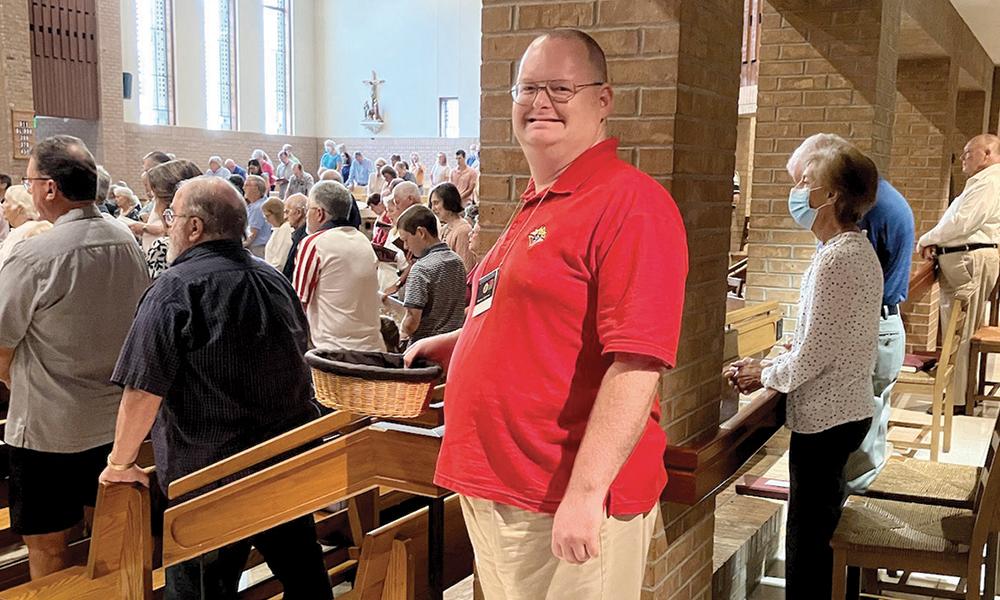 Knights Are Proud to Include Their Brother With Autism

Denise Cyprian said that when her son Ronny was a baby, there were virtually no signs of autism. She said she started noticing it as he got a little older.

“It took him longer to learn to walk, but the most distinct sign was the fact that he never really started talking,” she recalled.

She sent him to preschool, but it didn’t work out because he wasn’t social with the other children. The teachers weren’t sure how to teach him.

Denise decided to bring him to the Medical University of South Carolina around the age of four years old for testing.

“They said he had autistic tendencies,” she explained.

For years it seemed like there wasn’t a program that was a good fit for Ronny until the Dorchester District 2 school system welcomed him with open arms. Of course, this was about 40 years ago when there weren’t nearly the amount of helpful programs for neurodiverse children like there are now.

He flourished in the DD2 school system, and Denise got involved in the PTA. Ronny earned a certificate of completion in the late 1990s along with his sister, who is two and a half years younger.

As he became an adult, things began to shift societally so that Ronny was able to find work. Blockbuster hired him to reshelve videos and for 17 years, until the stores closed nationwide, he did just that. He then got a job with Goodwill Industries where he hangs clothes, and he has been there for seven and a half years.

Still, Denise wanted more for her son. She knew he was successful at work but something was missing. She wanted him to have friends and a place where he could socialize. That’s when he was invited by the local Knights of Columbus, affiliated with St. John the Beloved Church in Summerville.

“I didn’t think he would do it at first,” Denise explained. “But when I approached him a second time about it, telling him it would be a group of guys he could hang out with, he said, ‘I’ll do it.’”

She said he went to the first meeting in September of 2021 in a coat and tie, and he shook hands with everyone.

“He loved it,” she beamed. “I was a little worried that he wouldn’t like the laughter and the noise of the meetings, but he did fine.”

Ronny has since been promoted to inside guard with the Knights of Columbus Msgr. Richard C. Madden Council #6629. He checks membership cards and has all members sign in at the door.

“He takes the job very seriously,” his mom said proudly. “It is so nice to see him happy because he has always been withdrawn.”

It’s a win-win for the Knights, too. Grand Knight Chris Mongone said they are proud to have him. “He is such a big help to us,” he said.

The Knights volunteer for a number of events throughout the year. Mongone recalled a time when they volunteered to set up a Christmas party for children at the parish.

“I asked him to help set up tables and chairs and Ronny worked so hard,” Mongone recalled. “I actually had to tell him at one point to slow down!”

He said that Ronny also assisted in setting up the parish hall’s excess space at the Easter Vigil this year. Denise said they provided food for local homeless shelters also, and Ronny helped clean up the yard of a fellow parishioner who was incapacitated.

“He is such a big help to me at home with yard work and cleaning that I knew he would be a huge help with the Knights of Columbus too,” Denise said.

When Ronny became an officer as an inside guard, Mongone had a reception afterward at his home.

“Denise had mentioned that Ronny hadn’t been to a party since he was in middle school,” he said. “She was so elated that he came to the reception and had a great time. We just treat him like one of the guys. We don’t treat him differently at all.”

“Joining the Knights of Columbus has done so much for Ronny,” Denise concluded. “They are all so wonderful to him, and he couldn’t be happier.”