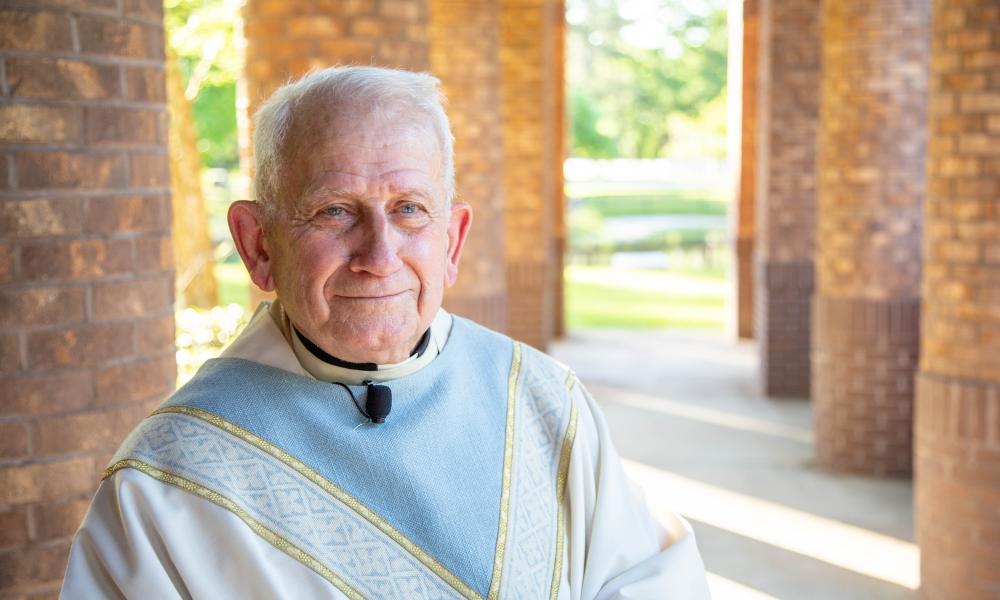 Home & Grown: South Carolina Is the Little Mission State That Could

Anyone who has lived in the Diocese of Charleston for the past 10 years can’t help but notice the rapid growth. The large number of Catholics moving to South Carolina is creating an ongoing need for more vocations, new parishes and schools.

Imagine the changes witnessed by priests who remember what the diocese was like more than 50 years ago.

Msgr. Charles Rowland, pastor of Holy Spirit Church on Johns Island, is a Charleston native who attended parishes and Catholic schools downtown. He has watched the diocese evolve and change under the leadership of five different bishops, beginning with Bishop Francis E. Reh, who was at the helm when Msgr. Rowland entered seminary.

During Msgr. Rowland’s childhood and in the early years of his priesthood, Catholics were a distinct minority here.

“I think there were about 75,000 when I was ordained by Bishop [Ernest L.] Unterkoefler in 1970, and there were some counties where the Church did not have a presence at all,” Msgr. Rowland said. “This diocese was still considered a missionary diocese, with a lot of needs, and Bishop Unterkoefler’s mission was to make the Gospel and the Church known in every county. We had to rely on help from outside the diocese to make that a reality.”

The Catholic Extension Society helped with funds, and the diocese also took part in a national cooperative program that required a lot of travel for fundraising, one of Msgr. Rowland’s early assignments as a priest. Every other weekend, he drove or flew to larger dioceses around the country to raise funds for his area, especially to help smaller parishes and missions across the far-flung rural state.

“Every weekend I would wake up and ask myself, ‘What diocese am I in now?’” he recalled with a laugh. Some parishes he visited were receptive, while others made life difficult for the young priest. One pastor said he didn’t have time to count the money collected and write a check for the diocese, so Msgr. Rowland was forced to fly home with a suitcase full of loose change and dollar bills.

Another priest who has witnessed massive change is Msgr. Edward Lofton, pastor at St. Theresa the Little Flower Church in Summerville. He was in the Air Force when he moved to South Carolina in 1968. He was working for the city of Sumter and studying to be a permanent deacon when he realized he had a vocation to the priesthood.

He was ordained by Bishop Unterkoefler in 1982 and said at that time the diocese had grown a little since the 1970s, but still had many areas where the Church did not have a large or visible presence. Catholics were often disliked or misunderstood there.

On one of his first assignments in the Myrtle Beach Deanery, he served as pastor at St. Peter Church in Cheraw, plus handled duties at St. Ernest Mission in Pageland and St. Denis Mission in Bennettsville. On weekends, he drove 147 miles round trip to celebrate Mass at all three places.

There were very few Catholics in the area in the ’80s, and Msgr. Lofton recalled that anti-Catholic prejudice was a very real thing. He recalls one fundamentalist preacher who passed out anti-Catholic tracts in the community, and others who voiced their dislike and misconceptions about the Church. On the other hand, many in Cheraw were respectful. The young priest evangelized his faith by teaching philosophy at the local technical college and serving on community boards. He even ran a radio show that offered inspirational Gospel messages.

From those early years in a largely rural area, Msgr. Lofton moved to a parish in North Charleston and finally to Summerville, which is now one of several rapidly growing communities in the Charleston area. In his 24 years at St. Theresa the Little Flower, the congregation has ballooned from about 325 families to more than 1,100 today.

Both Msgrs. Rowland and Lofton are pleased with the way the diocese has grown and changed during their years of service. Back then funds and the faithful were scarce in many parts of the state, but now there are more than 200,000 Catholics statewide and the Church is booming.

“In my years as a priest, this diocese has moved from being a mission diocese to a much more established one that is ready for the future,” Msgr. Lofton said. “It still felt more like a mom-and-pop operation in many areas when I first moved to the state, but now under Bishop Guglielmone especially, it functions and is organized like many of the larger dioceses. All the industry coming here is changing Summerville and this whole area hugely. My hope is that people still remain faithful to the Church and that values don’t change too much.”

Msgr. Rowland is also optimistic about the future of the faith here.

“We’re not like the Northeast where they’re closing churches and schools — here we’re opening them,” he said. “We have a lot of evangelization going on through those churches and schools, and we have young clergy coming in with a great dedication to the mission of the Church.”