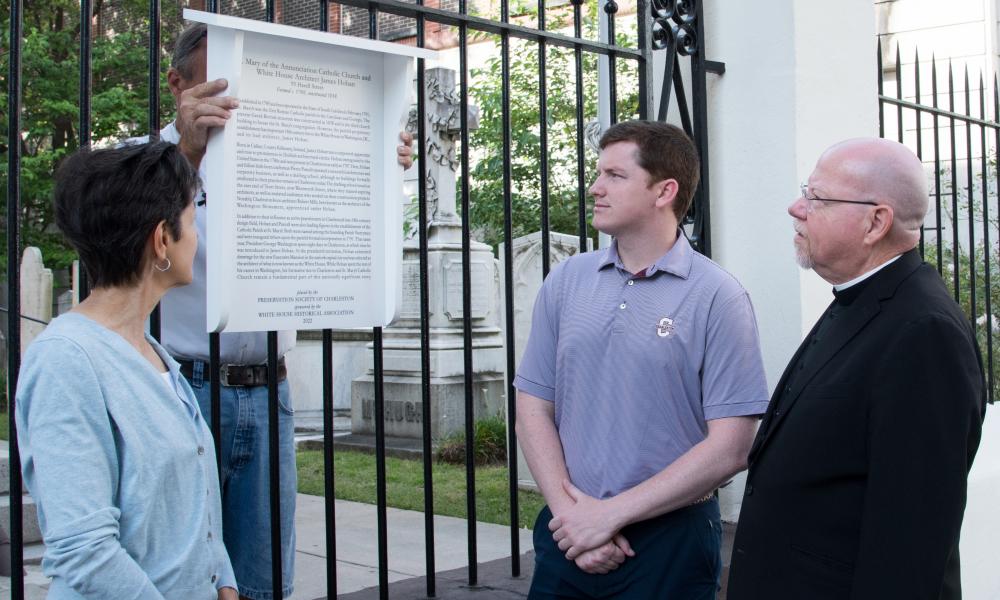 CHARLESTON—James Hoban, who designed and constructed the White House in the late 1700s, will be honored with a commemorative plaque in Charleston on May 5 at St. Mary of the Annunciation Church on Hasell Street.

The fitting location for this memorial marker in Hoban’s name is due to the significant impact he had on starting St. Mary — which is the first Catholic church in the Carolinas and Georgia — when he was living in Charleston in 1791. He was the founding parish vestryman and an inaugural tither upon the parish’s formal incorporation.

Hoban, an immigrant of Ireland, arrived in the U.S. in 1785. He quickly rose in prominence as a builder and gained the recognition of President George Washington, who selected Hoban to build the President’s House, or the White House, in Washington D.C.

Shea McEnerney, member of the White House Historical Association’s Next-Gen Leaders, studied Hoban for his thesis project in historic preservation from the College of Charleston’s graduate school. McEnerney was a key figure in bringing to light Hoban’s connection to founding the first Catholic church in the Carolinas and Georgia. In fact, according to McEnerney, Hoban also was a founding member of the first Catholic church in Washington, D.C., while he was working on the White House project.

Rev. Msgr. D. Anthony Droze, pastor of St. Mary, said that recognizing Hoban’s contributions to St. Mary recognizes the gifts of immigrants to our country since Hoban hailed from Ireland.

“St. Mary’s is proud to be a part of this,” Mgsr. Droze said. “We appreciate Hoban and all he did for us.”

McEnerney explained that he certainly wasn’t the first to realize Hoban’s influence on the Catholic community in Charleston, but he said Hoban’s connection was “severely unfocused.” He said that little was known about Hoban’s life in the Palmetto State other than his architectural involvement.

“He had significant involvement in the Catholic community in Charleston, and his time here was extremely important because he moved from here to go to D.C. to build the White House,” McEnerney said.

The plaque unveiling ceremony will take place at St. Mary of the Annunciation Church at 95 Hasell Street on Thursday, May 5 at 1 p.m. The historical marker, sponsored by the White House Historical Association, will be placed by the Preservation Society of Charleston. It will outline the story of Hoban and his legacy in Charleston — namely being a leading figure in establishment of the first Catholic parish in the Carolinas and Georgia.

McLaurin’s book about Hoban is the second publication in a series on the design and construction of the White House. The first book in the series is entitled, A White House of Stone: The First Ideal in American Architecture. The third book in the series will focus on the enslaved people who built the Executive Mansion.

“James Hoban’s years in Charleston were foundational to his becoming the designer of the White House. This plaque also marks an important moment in the history of Catholicism in South Carolina and the United States, as growing religious tolerance helped launch a Catholic immigrant from Ireland on a path to shape American history,” McLaurin said. 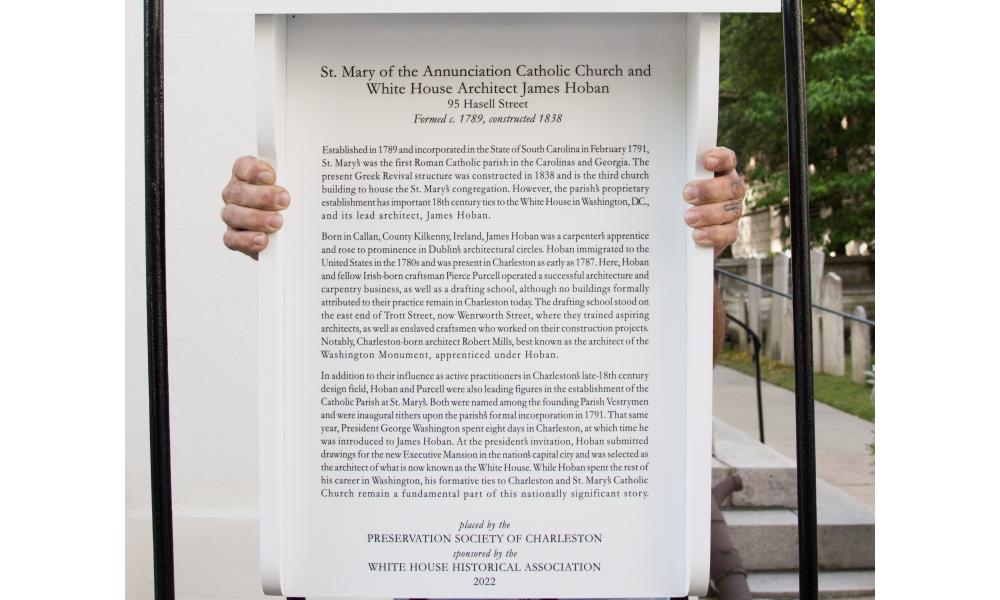