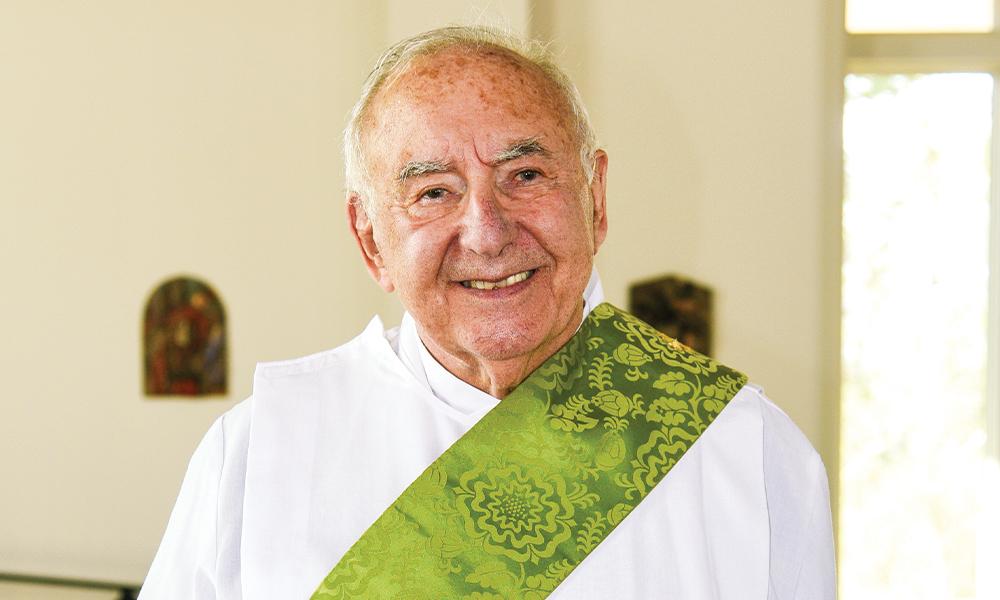 From France to New York to Charleston

Deacon André Has Always Brought His Faith With Him

Deacon André Guillet has certainly made his mark during his 37 year tenure as a deacon, but now it is time to retire from his current role as the director of the diaconate for the Diocese of Charleston.

Born in January  1943 in Talence, France, Deacon André’s connection to his faith began that June when he was baptized.

“I was born blind, but my mother and aunt took me to Lourdes and a few months later, they said I was able to see,” he said. “To me, it is no coincidence that I probably became able to see after my baptism. My devotion to Our Lady of Lourdes has always been sacred to me.”

Deacon André was an only child to a single mother. He grew up in the restaurant industry and admitted that “the Catholic Church became my escape from doing the dishes.”

Going to church alone made him envious of families that went to church together.

“I knew that was what I wanted,” he recalled.

For college, he attended restaurant school three days a week and two days were spent working at a restaurant. From 1960-1962, he served in the French army.

“I was fortunate because of my restaurant background to get a job at the officer dining room and sometimes I worked in the soldier bar.”

When he left the military, he started paperwork to come to the United States. He was headed to work at a hotel in Los Angeles, but before he got there he decided to stop in New York to visit an American girl, Marie, whom he had met in France.

“I never made it to L.A.,” he smiled. “The girl I visited in New York became my wife and the mother of our four sons [Michel, Marc, Matthew and Martin]. We now have nine grandchildren.”

He said that he was blessed to have the family that he’d dreamed of as a boy — the ones he admired in church. André and Marie were very involved in their parish, both teaching religious education, lectoring and being extraordinary ministers of the Eucharist.

He applied to become a permanent deacon in 1980 and was ordained in 1985. Deacon André served at Our Lady of the Assumption Church in Copiague, N.Y., and during that time was running a successful French restaurant in Long Island.

“We earned accolades from Newsday, The New York Times and in 1986, we became the restaurateurs of the year in the state of New York.”

Deacon André eventually left New York state to be closer to his grandkids, which was around the time that he got a call from Bishop Robert E. Guglielmone to be the director of the diaconate in Charleston. Deacon André said he had known Bishop Guglielmone for 30 years from their time in the Diocese of Rockville Centre in New York.

When Deacon André came to Charleston, he worked for three years as the general manager of the popular downtown Charleston restaurant McCrady’s.

At first, he was assigned to Christ Our King Church in Mount Pleasant, then he went to St. Thomas the Apostle Church in North Charleston and then Divine Redeemer Church in Hanahan, where he is now.

It has been 10 years in the Charleston area and as much as Deacon André has loved his work, he said it is time to retire.

“God has been so good to me,” he reminisced.

As director of the diaconate, he has seen 87 men ordained and brought another 51 into formation. Deacon André said his favorite aspects of being a deacon were baptism, wakes and weddings.

“There hasn’t been one day where I woke up and didn’t love being a deacon,” he said.

He has been instrumental in RCIA work and youth ministry. Deacon André said he isn’t going anywhere as he will be moving to live in the rectory at Divine Redeemer. He plans to volunteer with the parish and substitute in religious education.

“The parish loves me, the children love me and I love all of them. This truly comes from the heart.”