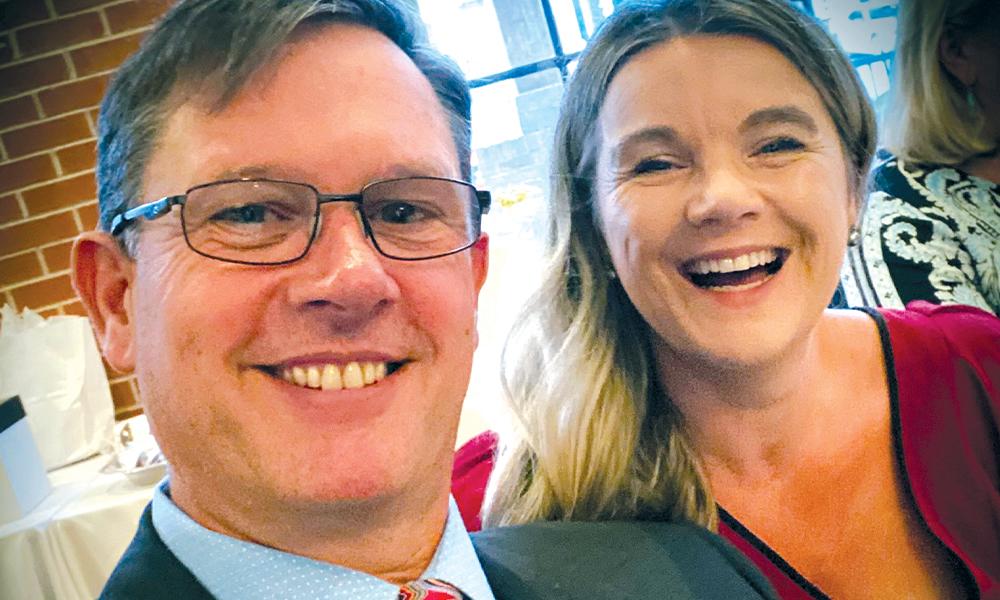 Direction to a deeper faith had eluded State Trooper Darian Dowis for decades.

His 25-year career in law enforcement was going well, and his 26-year marriage was on a solid foundation.

Still, “I felt a hole in my heart,” Darian said. “I was searching for something.”

That something was a closer relationship with Jesus.

Darian said he accepted Christ at a very young age, but he was unsure of the strength of that bond. He grew up in Cowpens and was raised by his grandparents as an independent Baptist.

“They got a lot of it right; they don’t have it all right,” he said of his Baptist upbringing, adding that he is thankful for the Christian building blocks it instilled in him.

He took those blocks and began building a life. He met Jennifer, and they married in the Baptist Church. Darian and Jennifer were blessed with a family, and his career began to take shape.

In 1997, Deputy Dowis moved to Beaufort and spent eight years working to keep the peace there. Then the family moved back to Cowpens, where Darian ran a canine unit for about seven years. He soon started moving up the ranks. Now, he’s a captain.

Along the way, he has dealt with some harsh characters.

“You tend to see the worst in people.

… It can affect your mental state,” he said.

In Cowpens, he attended the Baptist Church where he grew up.

“But I knew that I just wasn’t going to continue my journey there,” he said.

So the Dowises joined a Methodist Church for about six years, but, again, “I wasn’t being fed at that church,” Darian said.

Three years ago, a friend introduced Darian to Austin Birch, a Methodist who invited him to an Emmaus retreat. The retreat is a walk with the Holy Spirit that is intended to propel the faith of participants.

“He talked about this retreat, but I said, ‘I’m good …’ I thought I was content,” Darian said.

That longing for a stronger faith continued to drag on Darian’s heart until he relented, and in January of 2020, “Austin’s name popped into my head,” Darian said.

So he called Austin, who invited him to the February 2020 Emmaus retreat. This time, Darian accepted and with full support from Jennifer, who could see how excited her husband was to attend.

The openness and honesty of the men there made a huge impression on Darian.

“That weekend, there were a lot of quiet moments and a lot of jaw-dropping moments. And these men were willing to share it,” he said. “I saw a lot of brotherly love brought to life through Emmaus. They are living it.”

The men come from all walks of life. “You’ve got the whole spectrum of guys,” he said.

Yet, they all seemed united in spirit, and that impressed Darian, sparking his interest in Catholicism.

Folks at the retreat connected Darian to Men@Prayer, a Bible study and prayer group held Friday mornings at St. Paul the Apostle Church in Spartanburg.

During Men@Prayer, Darian became friends with Jody Armstrong, whom he had met at the Emmaus retreat. Darian began asking Jody deeper questions about the Catholic faith, and soon his faith began to blossom.

So Darian talked with Jennifer about coming into the Catholic Church, and she supported him.

“I wanted to pursue it further with RCIA,” Darian said, and Jennifer supported that, too.

Not only did she support him, she joined him.

Everything kept falling into place. Darian even chose Jody as his sponsor.

“He had a lot of questions about the Eucharist, confession, Mary, the saints,” Jody said. “He was definitely searching — inquisitive and open to finding answers — genuinely searching for the truth.”

Jody could relate. He said he went through his own conversion experience in 2007, which also involved Emmaus. He went into the retreat as a Protestant, joined Men@Prayer, then went into RCIA and became a Catholic.

Jody said he and Mary made it a point to go to as many RCIA meetings as possible.

“As sponsors, we tried our best to show support to them,” he said. They also offered reading material, including one or two books by renowned Catholic convert Scott Hahn.

“Sometimes we would attend Mass before or after RCIA,” Jody added.

The Mass and the Eucharist made a huge impression on Darian, according to Jody.

“Once the reality of the Eucharist was accepted, then everything else seemed to fall in place,” he said.

“Oh my gosh,” Darian said he remembered thinking after watching others go up to receive the Eucharist. “I don’t know if I can wait.”

That wait ended this past Easter, when Darian and Jennifer Dowis were welcomed into the Catholic Church.

The state trooper found direction for his faith journey home.