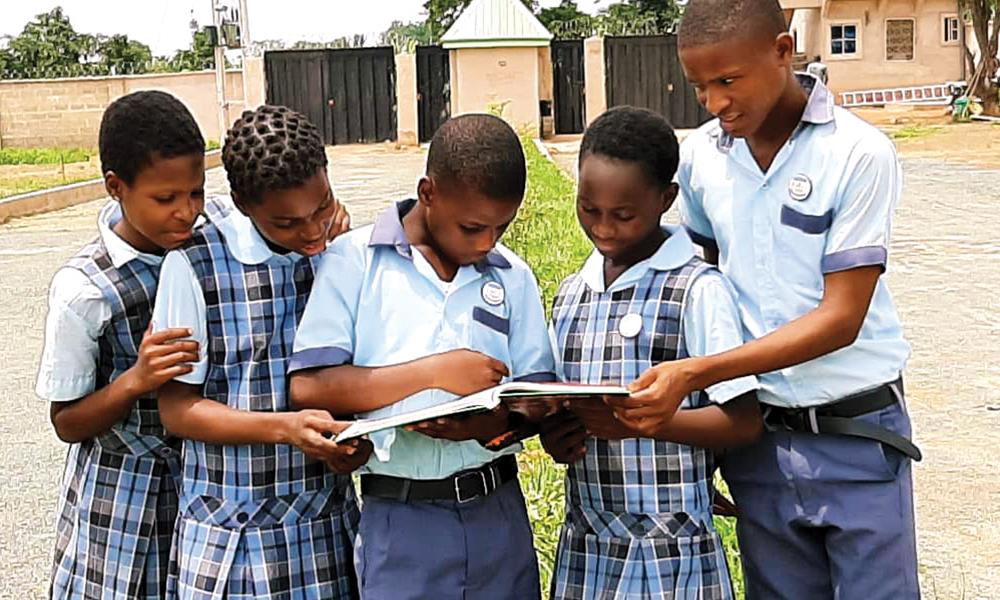 It all started back in 2010 on a trip to his home country, Nigeria. Father JohnBosco Ikemeh had been back to visit before, but this time he was visiting a friend in a different part of the country, the city of Abakaliki, and something caught his eye that he hadn’t noticed before.

“At every stop sign, there were kids selling stuff, which is not unusual, but something I was not used to seeing was mothers holding shovels hoping to be picked up to be taken to construction sites so they could work,” he recalled. “That stood out to me.”

Father JohnBosco said this experience took him back to his own childhood, when he was one of those kids trying to sell goods at street corners.

Father JohnBosco was able to attend school as a child until his city, Biafra, became war-torn during the Nigerian Civil War. He said he remembered how devastated he was when he couldn’t attend school anymore and how hard he worked to get a chance to go back.

A series of acts of kindness kept Father JohnBosco on course for an education. One of them was an invitation to live in the church quarters for free and to continue with school.

Father JohnBosco later entered the priesthood as a Dominican, and was relocated to South Carolina in 2005.

He was serving as chaplain to Joint Base Charleston, and also became the chaplain at the Medical University of South Carolina, where he is today.

On that 2010 visit to Nigeria, though, his true calling came to light. Father JohnBosco realized he wanted the children there to have the same opportunities he had. Seeing the mothers so desperate to work fueled his desire to provide their children with a more promising future.

And so began his quest. He bought land piecemeal starting that year, and in 2012, work on a road and bridge leading to the school was completed. It was also in 2012 that Father JohnBosco’s contract with Joint Base Charleston ended, which meant funding for the project came to a halt.

“Depression set in. I didn’t know what to do,” he said.

In 2014, he started a nonprofit: African Education Outreach. “I knew I had to try and raise money in order to keep this dream alive.”

Work resumed. In 2017, Water Missions International built a treatment plant there; in 2018, the concrete block for the school was laid.

In September of 2019, missionary sisters came and started enrolling children, and the school opened with with 67 students. It is a three-story building, with six rooms each on the first and second floors for dormitories; the third floor has open rooms, a computer lab and an exam room. Each dorm room can hold up to five students. The sisters also now have their own residence on the property.

There is a security fence around the campus for safety. And, eventually, they will have a separate dormitory building for boys. Father JohnBosco said they have a soccer field, volleyball court and basketball court.

The school is named Kassie Braun Memorial School, after a young woman Father JohnBosco knew from his time in Pennsylvania before he came to South Carolina. She perished in an accident in Myanmar while on a study abroad trip.

“She was like a goddaughter to me,” he said.

Recently, the school was granted money to build a library. It was Kassie’s aunt who helped secure the grant funds.

Since education is not free in Nigeria, Father JohnBosco said they are currently in desperate need of sponsorships for children to attend. They are also in need of working computers, new or used, for the computer lab.

For more information on supporting the school, visit www.africaneducationoutreach.org.