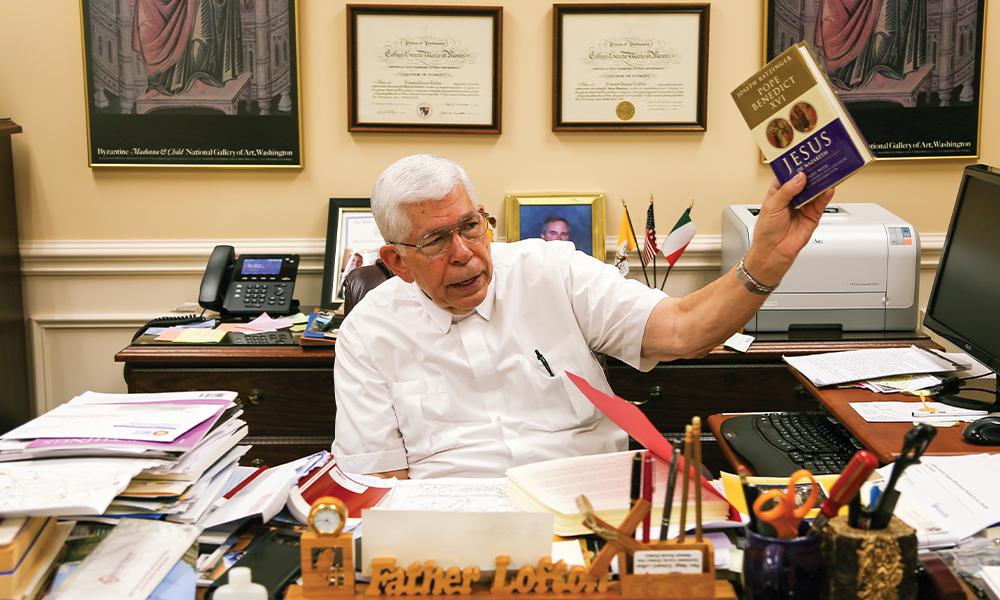 Even in Retirement, Msgr. Lofton Continues to Build

In recalling some of the milestones of his 39-year ministry, Msgr. Edward Lofton lists an impressive resume of building churches and communities, while responding to the people entrusted to his care.

Although he officially retired as pastor of St. Theresa the Little Flower Church in Summerville, he waited for a new priest to be appointed in July, continuing to celebrate Mass and work as he was needed.

Msgr. Lofton is an outspoken man, but his truth-telling is not unfeeling. He is known for his compassion, and he has helped people in their darkest hours, whether suffering from mental illness, family crisis or a loss of faith. In addition to his work as a truly pastoral priest, he has been a missionary. Msgr. Lofton has been director of the Society for the Propagation of the Faith for the Diocese of Charleston and has been involved in raising funds for building and repairing churches in Fiji for more than 15 years. He will continue the work for now and hopes to do so in future if he’s appointed by a new leader after Bishop Robert E. Guglielmone retires.

While he waits for his next mission trip, he will begin work on a website for the continuing education of priests. He said it will provide a clearinghouse of information. He hopes to garner the support of Our Sunday Visitor as a host and will work to raise funds to support the effort.

It will link to organizations such as the St. John Vianney Center, a behavioral health facility, St. John’s University, Villanova University and the Oblate School of Theology, to name a few.

It will all be based around the document of continuing education for priests, Pastores Dabo Vobis, which focuses on the spiritual, personal, intellectual and psychological formation.

Msgr. Lofton wants to make it a place for priests to find the intellectual stimulation they need but also, if they are struggling, to find meaningful ways to deal with their stresses.

On the day of this interview, he walked through his office and out to the chapel, greeting parishioners who are now old friends. He moved outdoors and towards the church and was greeted by more people with whom he has memories to recall and stories to tell. He made the time to engage in a conversation, a difficult one about people struggling with their faith because of how flawed the human element of the Church can be.

“No matter how broken things may seem to them about the Church, the good news is that Christ is still here, and it’s because of that brokenness, if you think about it,” Msgr. Lofton said. “We are not going to be in this state forever, which is a very blessed thing.”

Deirdre Mays was the longtime editor of The Catholic Miscellany. She is a freelance writer and photojournalist. Email her at dcmphotoj@gmail.com.