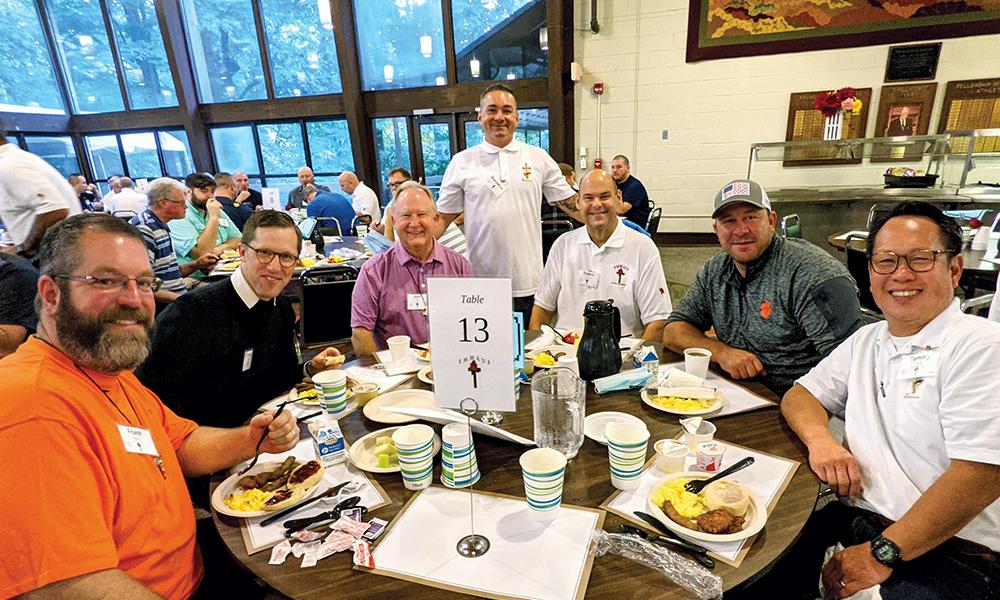 Emmaus Allows the Holy Spirit to Touch the Heart of Man

The Gospel of St. Luke relates the story of the risen Christ appearing to two men walking from Jerusalem to Emmaus. They are joined by a stranger who explains the Scriptures as they walk, how it was ordained that Christ should suffer and enter his glory. The illuminating climax of the experience was when the stranger took bread, broke it and gave it to them. The men had their eyes opened and they recognized him as the risen Lord. They rushed back to Jerusalem to tell the others.

About 100 guys surrendered control of their lives to the Holy Spirit for one long weekend this summer during the first Emmaus retreat in 18 months. Letting God take charge fueled their relationship with each other and kick-started a closer walk with Christ.

Don’t be such guys, they were told. You don’t have to handle every situation.

“Let God take the wheel on the things of your life that challenge you,” one speaker told the group. “Be vulnerable to the Lord,” he added, “be open, and watch God work in your lives.”

Then he challenged the men, “Are you man enough to give up that control?”

The Emmaus speakers were brutally honest about the times in their lives when they thought they had control of tough situations — right up until everything they believed in shattered. And it wasn’t until then that they finally heard God.

“God knocks, but if you say no, he won’t bother you,” one speaker said.

Still, God does not give up. Sometimes it takes a lot of banging on the door before we’re humbled enough to finally answer. Only then do we learn that we are not alone, he said.

“Allow the Holy Spirit to come in. Let him transform your life, and he will,” another speaker told the group.

“If it can be mentioned, it can be managed. So if you have a problem, talk about it,” one team leader said. “God transcends time. This is a precious opportunity to heal old wounds,” he added.

That is when the first-time candidates learned that Emmaus is a brotherhood. They discovered that others who have been scorched by life’s trials survived by turning to God and leaning on these Emmaus brothers for advice and help.

“It’s comforting to know that they are here for us,” one man said. “It was eye-opening and well worth it.”

David Piccuta was chosen by Carolina Men’s Emmaus leader Jim Barrett to spearhead this 17th retreat in the area. David said all men were welcome, and they don’t have to be Catholic. A man only has to open up his heart. He said some of the 40 first-time candidates and 54 team leaders at this retreat were not Catholic. They, however, did have faith.

“We have brothers praying for the candidates the entire time of the retreat,” David said. “The adoration team is continually praying for you. Your job is to be consumed by the fire of the Holy Spirit, so leave your baggage at the door.”

In fact, team members made sure candidates were not thinking about baggage when they arrived at the Black Mountain retreat. Before they even got out of their vehicles, a team member was there to take all suitcases and backpacks.

Jim said the message is clear from the start. “We want your full attention on God. We, the team members, will take care of everything else.”

He said the retreat unfolds fully guided by prayer, and he hopes the men take the experience back to their churches and become active in parish life.

One speaker said that Emmaus works to “peel off all the masks we wear. Christ wants to have that real contact with the real you,” he said. “Who is the you that you are hiding from everybody else? Because that is the real you. And God wants a real encounter with the real you.”

Emmaus pulls no punches. The Holy Spirit demands honesty to the core, and many men say that is why it appeals to them. They know an Emmaus brother has their back, even though it is not a formal organization. It does not compete with other ministries, because its sole purpose is to put on retreats that allow the Spirit to touch the hearts of men.

The Emmaus concept for men started at St. Louis Church in Miami, Fla., in 1985. Jim said the pastor at St. Louis noticed that a lot of men came to church but were not involved.

He wanted to change that. A team was formed to set up guidelines for the first retreat. It had to be Christ-oriented and prayer-centered, according to Jim.

It was. It inspired men at St. Louis Church, then others noticed the change. Soon Emmaus began to expand, with the biggest branches in Miami and Pittsburgh, Pa.

It has taken root in the Carolinas, where 17 retreats since 2012 have been held by this particular group based in Spartanburg.

Jim said their intent is to have men fully open to the Spirit.

It’s working. Many of the men at the Black Mountain retreat have returned from this past Emmaus session eager to serve in their parish.

Indeed, their hearts were burning within them as they listened to the word of God on their way.

GPS Can’t Map the Road to Emmaus. It’s a Journey of Self-Revelation.

This path is loaded with guys who have crashed and burned — many several times. But they haven’t given up. No. They have learned sobering lessons from their wrong turns and flameouts and are dedicated to making sure others don’t take the same errant side roads.

It started with a buddy who invited me to a retreat at Black Mountain. I told him I didn’t have time. I was too busy. But he pressed and pressed. He told me that if I didn’t have time in my life to think about God, then I really needed to step back and reevaluate my priorities; the retreat would help.

That clinched it. He was right. I was frazzled. It was time to go to this quiet place on the mountain, relax and pray.

Well, while I love the “Our Father” and “Hail Mary,” and the “Prayer to St. Michael” puts me at ease, I don’t know too much about deep, introspective prayer.

This retreat brought that out in a very humbling way. It was about searching for that inner voice that steers the conscience toward peace. And I didn’t have it.

I think every guy on that mountain was seeking the same sense of peace. Some were further along than others. And me? I believe I was in the back of the pack. I had a long way to go. I still have a long way to go. The leaders of this retreat, however, never left me behind.

They offered advice, having learned the hard way from their own experiences. They took my hand and told me to let go of all the craziness and to trust in the Lord.

But I like my comfort zone. It is hard to give that up.

The advice from these Emmaus veterans, however, makes a lot of sense. They said that being bullheaded just leaves bruises when you try to bang through a wall. And that wall isn’t going to budge.

Then they called me their brother. That’s a beautiful thing. I know I’m not alone when life turns nasty.

They left me with this quote: “Allow the Holy Spirit to come in. Let him transform your life, and he will.”

I’m working on it. Emmaus is a long, long road.