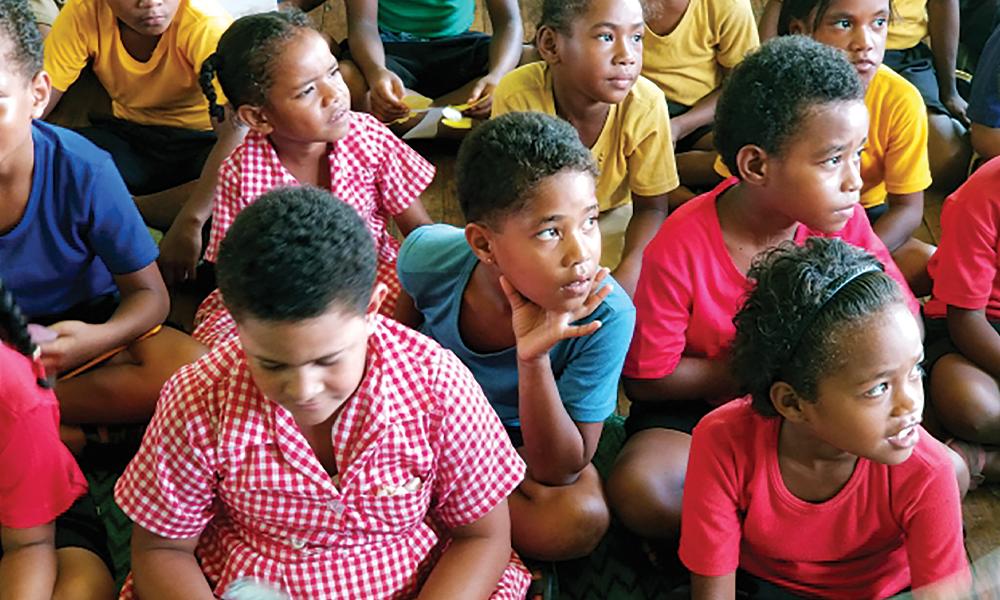 ‘The Church is at her best when she’s in mission’

Marist priests from France brought Christianity to Fiji in the mid-1800s. A chief asked the priests if he could take their cross into battle, which he won. The chief was so impressed that he and his tribe converted to Catholicism. That was the start of the faith in Fiji.

The priests and the people built a church, Holy Cross, as a safe place to worship, and it has withstood the ravages of time and foul weather for more than a century, Rev. Msgr. Edward D. Lofton said. More than 100 years of hurricanes and termites has finally laid Holy Cross low.

Msgr. Lofton was appointed by Bishop Robert J. Baker in 2006 to spearhead the Society for the Propagation of the Faith, a ministry of Pontifical Mission Societies.

“I couldn’t say no,” Msgr. Lofton said. “All my family from Ireland was involved in missions … I love doing this.”

So does Helena Moniz. She came aboard as associate director, and the two have formed a beautiful mission team.

The work has called them to Fiji, where they have helped build three new churches and renovated Holy Cross. Now they are rebuilding a crumbling convent, which should be completed by the end of the summer, according to Msgr. Lofton, and they have plans to raise up another church.

“The church is the heart of the village,” Moniz said.

The community recently finished building Our Lady of Sorrows, a new parish on Taveuni island, Fiji. Msgr. Lofton said the islanders have been praying for this worship space for almost 30 years, and it took two years to complete.

Everyone on the island pitched in: Catholic, Hindu and Protestant.

“They all helped build the church. Now isn’t that amazing?” he said. They all pitched in because they all benefit, and the “church is for everybody. We welcome all people,” especially during hurricane season, which is December through March.

“The church is about the only solid thing that they have. It’s a safe place for them to come in a hurricane,” Msgr. Lofton said.

Our Lady of Sorrows was a huge prayer answered for the Fijians, and they are willing to work hard, “they just don’t have the money,” the monsignor added.

That is where Propagation of the Faith can help.

Msgr. Lofton and Moniz have praised parishioners across South Carolina for their generosity.

“The people here care,” Msgr. Lofton said, and Moniz added that the diocese “has been remarkable in their support.”

Moniz recalls one mission appeal to parishioners in Myrtle Beach.

“I talk about the life and needs in Fiji — about building churches, educating kids, about how faith grows, about how our faith grows,” she said. “Everybody is entitled to know Christ.”

It touched the heart of a farmer from Iowa who was vacationing on South Carolina’s coast. Moniz said the appeal moved him so much that he went home and changed his will.

Much of the funding to build Our Lady of Sorrows came from that farmer, Msgr. Lofton said.

Msgr. Lofton retired in June 2021, but still has plenty of work to do in the island nation. When the convent is completed, he has eyes on constructing another church. In fact, he said islanders are already working on the foundation.

“If God wants it, it’s going to happen,” he said of future projects. And, he wants to be part of it.

“He gets to be their local pastor for a time,” she added.

“It feels like I’m going home,” the monsigntor said of his travels and work in Fiji — a home for Catholics which he has helped build.

Learn more about the work of the Society for the Propagation of the Faith at propfaithcharlestonsc.com.