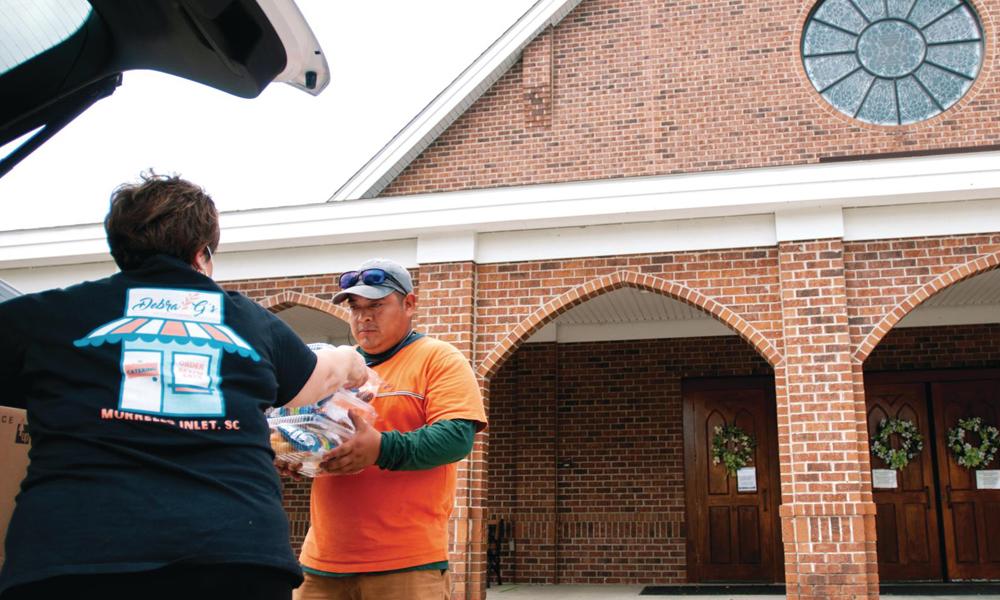 Building One Family in Faith

Because of the generosity of their parishioners, Holy Trinity Church in Orangeburg has a full-time youth director for the first time, Good Shepherd Church in McCormick has plans to upgrade its rectory and Precious Blood of Christ Church on Pawleys Island is building new space for its beloved food ministry for those in need.

Those are just three examples of parishes around the diocese that are reaping the benefits from the Bicentennial Campaign, which officially ends on July 11 with a final celebration of 200 years of the Church’s witness in South Carolina.

As of June 18, the campaign had more than $69.5 million in pledges, with $30.6 million collected through donations from more than 15,000 Catholic families. And there is still time for people to contribute to a campaign that will leave behind a legacy of benefits for the diocese and its parishes.

When the campaign started in 2019, churches and missions were given a target goal based on an average of their offertory over a three-year period. They receive half of every dollar earned up to that goal, and sharing started with the first dollar raised.

One of the most dramatic, visual testimonials on what the Bicentennial funds accomplished is renovation of the Cathedral of St. John the Baptist in Charleston. Funds raised there helped complete the Cathedral’s needed updates and beautiful restoration.

A big motivator for donors has been the chance to help their own church community.

“Folks in our parish were very enthusiastic about participation in the campaign,” said Michael King, comptroller for Precious Blood of Christ (PBOC). “They were excited not only about what the matching funds would do for our parish, but about what their donations would do for programs around the diocese itself.”

Their generosity will in turn help PBOC expand its outreach to the community.

One of their biggest projects planned for the Bicentennial funds is the expansion of Father Pat’s Kitchen, which provides meals for those in need three days a week. Since it opened in 2007, volunteers have served more than 125,000 meals. While the pandemic forced the kitchen to switch to drive-up service temporarily, it hasn’t slowed volunteers. King said the goal is to upgrade the building that houses the kitchen and expand storage capacity.

“We were averaging 300 people per meal before the pandemic, and we’re still seeing that amount of need now,” he said.

Donations continue to help outreach programs at the parish level and also across diocesan ministries. A large part of the funds supports Catholic Charities, which has been working harder than ever this past year to address increased need stemming from the pandemic.

The agency has been able to assist food pantries to help hundreds of families facing food insecurity. The campaign has also helped Clean of Heart, which provides shower and laundry services for those experiencing homelessness. Clean of Heart in Columbia recently moved into a permanent facility, and the program runs a mobile unit that helps people at different locations in the Upstate.

Bishop Robert E. Guglielmone said the funds from the campaign are being used to ensure a bright future for every element of outreach in the diocese. The goal, he said, is to prepare our parishes, missions, schools, social programs and ministries for the next century.

“I’m eternally grateful to the faithful for their support of this effort. This campaign ensures that we can move into our third century of existence with enough resources to do our very best in proclaiming the Gospel in South Carolina,” the bishop stated.

Those involved with the campaign said it was a privilege to watch people draw on their faith for strength and comfort during the pandemic.

Because of COVID-19, parishes worked to reach people who were unable to come to Mass. Sacramental celebrations were livestreamed, Bible studies, religious education classes and youth programs met through Zoom. Volunteers staffed food pantries and launched phone trees and other outreach to help isolated people keep in touch.

For instance, clergy and staff at St. John of the Cross in Batesburg-Leesville, which serves a largely Hispanic congregation in rural areas, needed a way to reach out. Brian Alberts, parish campaign manager for the Office of Stewardship and Development, helped the parish create a Facebook page for livestreaming Masses; within hours, more than 300 people had joined.

Carrie Mummert, director of Stewardship, said the willingness of people to give even during difficult times is evidence of the richness of their faith.

“This campaign has shown me that people here believe in the future of the Church, and that they care about our parishes, our programs and our ministries,” she said. “This kind of support shows that we are building the future, and we’ll be able to go on for the next 200 years.”

To join the campaign, visit CHARLESTONDIOCESE.ORG/BICENTENNIAL.

Good work from the Bicentennial Campaign

Good Shepherd Church in McCormick raised 126 percent of their $220,000 goal from nearly 40 percent of their registered parishioners. With security upgrades for their campus at the forefront of their needs, the parish has since used their campaign funds to implement the first phase of their Facility Security Plan to ensure the safety of the buildings, parishioners and staff.

St. Anthony Church in Ridgeland is the spiritual home to diverse communities in the Lowcountry. In early 2019, the parish raised more than 200 percent of its campaign target, allowing them the means to conduct repairs, modernize campus facilities and increase comfortability for parishioners and guests.

The Cathedral of St. John the Baptist in Charleston stands as the “mother church” of the Diocese of Charleston. A major, much-needed renovation was initiated using Bicentennial Campaign funds in late 2019. Now completed, the $2 million project exhibits and emphasizes the beautiful elements of the Cathedral as it was originally conceptualized.

Holy Trinity Church in Orangeburg established itself as one of the earliest examples of success in the beginning of the campaign. In 2018, Holy Trinity and its mission, St. Theresa in Springfield, both exceeded 220 percent of their targets. Holy Trinity has begun to implement a viable youth ministry; at St. Theresa, funds have allowed for renovations to the church and parish hall to take place.

St. Augustine Church in Union was the first parish to surpass 100 percent of its campaign target in 2020. With under 40 registered families, St. Augustine carried the successful momentum that many other smaller parishes have experienced. The parish intends to maintain a “rainy day” fund to allow for a quick response to any emergency maintenance issues that arise.

Precious Blood of Christ (PBOC) on Pawleys Island had a robust list of needs they hoped to address through the Bicentennial Campaign. Recognizing that more than half of the raised funds would be returned to the parish if 125 percent of their target was achieved, the PBOC executed an overwhelmingly successful campaign and raised more than $1 million. The parish has taken initial steps to add new storage space for their outreach kitchen and other campus improvements.

St. Catherine of Siena Church in Lancaster has begun the process of bringing in architects to address the various church renovations the parish would like to conduct. With a target of $130,000, the parish was motivated to exceed this figure to ensure more funds would come back for the renovations. St. Catherine completed their campaign with 120 percent raised and the excitement of future projects becoming reality.