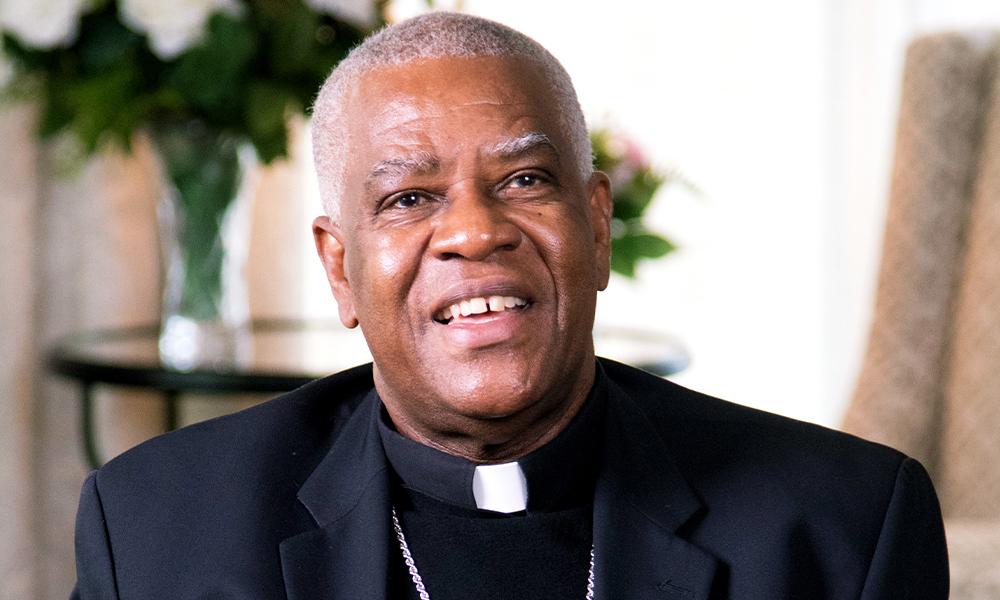 When new Bishop Jacques Fabre-Jeune, CS, thinks about what prompted him to become a priest in the first place, two instances stand out.

“I remember exactly what my mother said when I told her I was going to be a priest in the early 1980s. She said, ‘If you are going to do it, do it well. Do it the right way.’ Those words always stuck with me,” he explained.

And then there was just last fall when he was visiting a congregation of immigrants and refugees with a group of Scalabrinian Fathers.

“One of the priests hugged me twice and said, ‘Don’t say no to the Mother church.’ Now I know what he meant.”

“Don’t say no” and “Do it the right way” ran through Bishop Fabre’s mind when he received the call to be the bishop for the Diocese of Charleston. “I had to sit down for five minutes.”

Bishop Fabre was born on Nov. 13, 1955, in Port-Au-Prince, Haiti. He comes from a family of eight — six children: three boys and three girls. His mother had to leave the family for four years when he was growing up so that she could establish herself in the United States. Bishop Fabre said that his older sister, who was only 18 years old at the time, took care of him and all the siblings.

Bishop Fabre would later join his mother in Brooklyn, New York, where he attended high school and completed secondary education.

It was while Bishop Fabre was in college that yet another instance occurred that would forever change his life’s direction.

He was studying to be an engineer.

“One day I was taking an exam and I couldn’t understand the questions. All of a sudden I heard a loud noise. The professor had thrown something on the floor, and he said, ‘If you want to do well, you have to sell yourself!’ I kept thinking about that — ‘sell yourself’ — and I knew I was on the wrong path. That was when I called my mother and I said, ‘What am I doing? I have wanted to be a priest since I was 13 years old.’”

Bishop Fabre joined the Missionaries of St. Charles Borromeo, or Scalabrinian Fathers, and professed his vows in 1982. He was ordained four years later in October 1986 in Brooklyn.

He explained that at first, he was assigned to Our Lady of Guadalupe Church in Immokalee, Fla., from 1986 to 1990. For the past 36 years he’s served in Delray Beach, Fla.; plus, the countries of Colombia, Cuba (at Guantanamo Bay), Dominican Republic and in Rome. He was serving in Forest Pak, Ga., at San Felipe de Jesus Mission when he received the Apostolic Nuncio’s call to become a bishop.

Speaking five languages, Bishop Fabre’s fluency in French and Spanish has enabled him to connect with a wide variety of people, something that he holds true to his heart.

His Haitian roots will continue to be a huge part of who he is. He said his culture loves to dance and have feasts and when asked what his favorite music is, Bishop Fabre replied, “I will dance to it all. I love music.” When asked about his favorite food, he laughed and said, “Whatever is on the menu!”

When it comes to being chosen to do God’s work, Bishop Fabre describes his ministerial style as nonjudgmental. He said he sees the humanity in everyone.

“We all have gifts,” the bishop said. “We just have to recognize our talents.”

FIRSTS — WITHOUT THE BOX

To that end, Bishop Fabre shies away from being called “the first” of anything.

“I don’t like any title because it might put me in a box. First Haitian, first Black, but what does it mean? It might put you in a box, and I hate to be boxed in. I think it is interesting, because it is history and that means we are moving forward to have a person from a different country, a different language, being part of the hierarchy,” he said. “It’s huge progress, but from there we should leave it at that and see us as people with one history, so I’m going to be part of that history.”

He looks forward to learning more about the Diocese of Charleston and he said his hope is to be accepted. “My hope is to continue what God asks of me as a person of my gifts and to put that into service, to the diocese and of course that I will be accepted,” he said. “That is a challenge for all of us.”

Bishop Fabre said he looks forward to reaching out to the youth. “I think young people have been left out. I feel as though we have lost two generations. I want to bring back the youth.”

Bishop Fabre said he will wholeheartedly support the Charter for the Protection of Children and Young People, which is celebrating its 20th year in South Carolina.

“When you hurt a child, it’s forever,” he said. “People should always feel safe in their church. It is supposed to be a safe and loving environment. Yes, I want to continue in that direction. The Church has made many mistakes, but we have a better understanding now.”

He concluded the interview talking about life. “We must support life, whether it be with the unborn or capital punishment. As Christians, we must always sustain life.”

Bishop Fabre said he is excited to get to know the Diocese of Charleston — each parish, whether large or small, and with all our differences. His plan is that we form a vision together to evangelize the Palmetto State as a family.