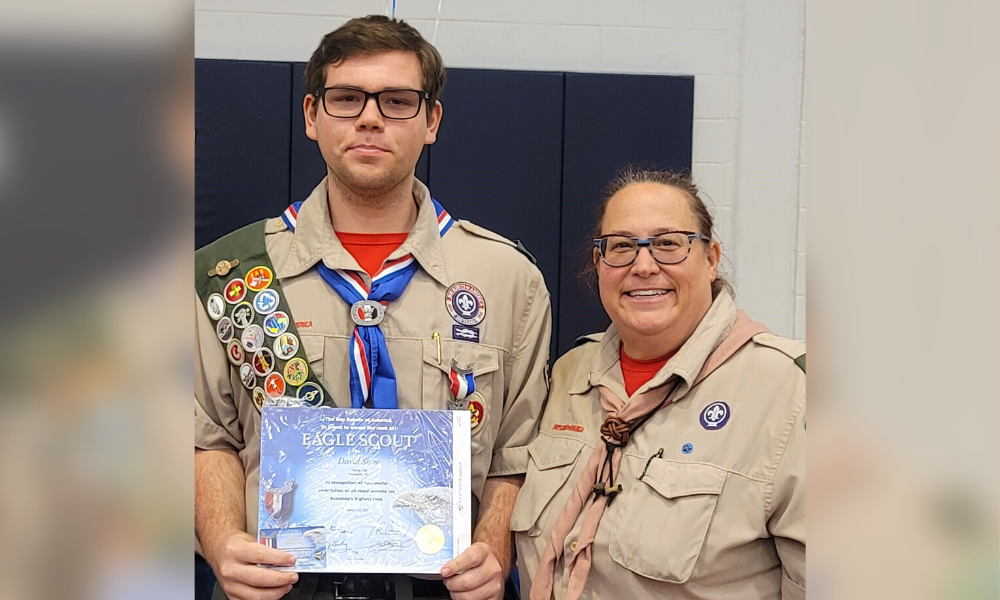 John Paul II School junior David Shaw completed his Eagle Scout project, and recently participated in the Eagle Scout Court of Honor Ceremony when his rank became official. His project created a walkway from the back of the parking lot at the school to the circle around its pond, where other Eagle Scouts’ finished projects are located.

Eagle Scout is the highest rank in Boy Scouts. Requirements include the achievement of many merit badges, an attitude that reflects the Scout oath, service and leadership. Eagle Scouts must also complete a service project that benefits a community, school or religious organization.

David has been part of scouting since he was five years old. He is a member of Troop 200, chartered by St. Peter Church in Beaufort.

“Scouting has been a major part of my life since before I can remember,” he said. “Both my mom and my brother were involved in scouting before I was born. I was always brought to my brother's weekly meetings and did the activities with him, so why not join the pack that met at the same time? I joined scouting as a bobcat.”

David decided to do his project at the school because he wanted it to compliment the Eagle Scouts before him.

“The specifics of my project just fell into place,” he said. “After Hayden Jennings ‘21 and Jack Brock ’23 finished their projects, there was an evident problem — there was no convenient way to get to their finished projects. That's where my project came into play.”

He pitched the idea of a pathway to John McCarthy, school principal, who gave the green light since it would befit all visitors, students and teachers.

The bulk of his project was completed during Christmas break 2021, so David got help from family and many Scouts, parents and other students.

“The funds used in the project were obtained by earlier Eagle Scouts,” he explained. They left their extra with the school, and I used those funds in my project,” he explained.

Photo Caption: Eagle Scout David Shaw is pictured with is mother, Andi, at the ceremony where he was officially awarded his rank.