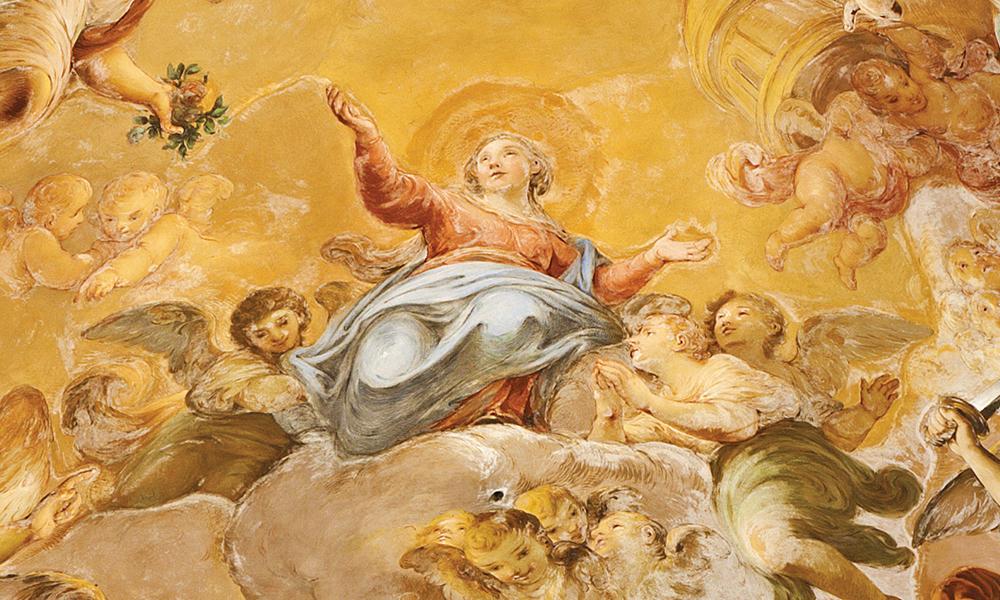 The Assumption of the Virgin Mary

The Mystery of Mary is Intimately Related to the Church

The celebration of the Solemnity of the Assumption of the Virgin Mary into heaven is Aug. 15. This solemnity is for the entire pilgrim Church and is a sign of consolation and hope.

The assumption of Mary into heaven was defined and declared a divinely revealed dogma (infallible and beyond doubt) by Pope Pius XII, on Nov. 1, 1950, in his apostolic constitution Munificentissimus Deus. The constitution teaches “That the Immaculate Mother of God, ever Virgin Mary after completing the course of her earthly life, was assumed body and soul into heavenly glory.”

The theological meaning of the assumption is important for all believers. When Pius defined this teaching, it was to complete the Marian dogmas and also to explain how the mystery of Mary is intimately related to the Church and the destiny of each of us.

What was defined primarily was that by a divine privilege, the Lord related the Blessed Virgin Mary to the victory of Christ. Therefore, she participates in the state that the righteous will have at the end of their lives in what is called the parousia, or the Second Coming. We will be able to receive the glorified body that all those who have accepted the Word of God can obtain.

The fathers of the Church, when giving reasons why it was important that Mary be raised body and soul to heaven, was not only because she is the Mother of God, not only because she is immaculate, but because she is a perpetual virgin — before, during and after childbirth. Her virginity is like a mark on her body that has not been, nor will it ever be, removed. It indicates the permanent youth and holiness of the Blessed Virgin. It is an incorruptible sign.

The assumption of Mary helps us visualize our last union with Christ. The Catechism of the Catholic Church tells us that the “Assumption of the Blessed Virgin is a singular participation in her Son’s Resurrection and an anticipation of the resurrection of other Christians” (966).

Mary being raised body and soul is a great example for all the pilgrim Church on earth as she demonstrates a model of faith and perseverance, and full faith in the living God.

The Second Vatican Council reminded us of the following: “By reason of the gift and role of divine maternity, by which she is united with her Son, the Redeemer, and with his singular graces and functions, the Blessed Virgin is also intimately united with the Church. As St. Ambrose taught, the Mother of God is a type of the Church in the order of faith, charity, and perfect union with Christ. For in the mystery of the Church, which is itself rightly called mother and virgin, the Blessed Virgin stands out in eminent and singular fashion as exemplar both of virgin and mother” (Lumen Gentium 63).

This dogma of the assumption is exceptionally important for all Christians because it reaffirms our hope for the world that is to come. We all are called to participate in the glory of God and we can do this if we put our eyes on Jesus, through Mary, to imitate her and fulfill what she said at the wedding at Cana. She tells the servants, “Do whatever he tells you” (Jn 2:5). Mary repeats this to us day by day.If we want to participate in the final glory, if we want to reach the fullness of grace and glory, we have to listen to the word of the Lord and do what he tells us. His mother will always point us to him.

Sister Guadalupe Flores, OLVM, is the coordinator of adult faith formation for the Office of Hispanic Ministries. Email her at gflores@charlestondiocese.org.